Civil armed forces called in as 19 tourists died in Murree

MURREE, Pakistan: The severe cold weather and snowfall have left 16 to 19 tourists dead in the mountainous resort of Murree while the help of civil armed forces has been sought to evacuate the stranded tourists.

In a video statement on Saturday, the Interior Minister Sheikh Rashid Ahmad said that all routes heading towards Murree have been closed as already more than 100,000 vehicles have entered Murree and Galiyat causing gridlocks and enormous difficulties for the entrants.

The minister told that the administration of Rawalpindi and Islamabad put in untiring efforts to deal with the situation; however, a huge influx of tourists had already been witnessed in Murree, Galiyat, and Barian making it difficult for them to clear the roads.

Sheikh Rashid told that now all roads towards Murree have been blocked and they have decided to seek the undeclared help of the civil armed forces. 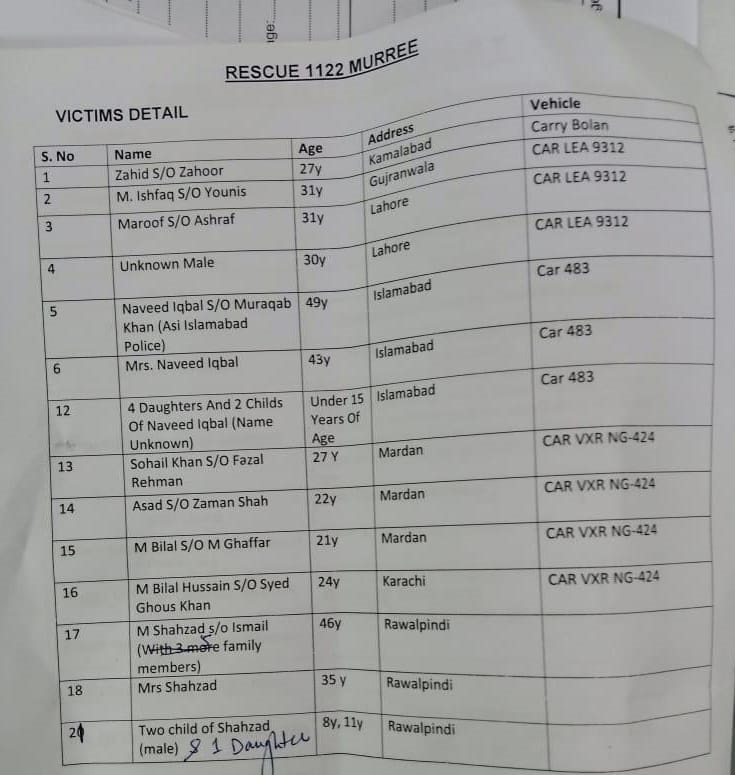 The interior minister said that he is himself supervising relief and evacuation activities and also asked the locals to come forward for the help of stranded tourists who are in dire need of blankets and food.

The minister said that the roads will remain closed till 9:00 pm on January 9, and hoped that the situation would be under control by today evening.

Calling Murree a disaster area, the Punjab government had declared an emergency there.

The Chief Minister Punjab Sardar Usman Buzdar said that he has directed all agencies in Murree to expedite the process of rescue and evacuation of citizens and vehicles stranded in the snow and to send more machinery and relief goods from Rawalpindi.

Usman Buzdar said that more than 23,000 vehicles were rescued and evacuated from Murree last night.

It said that all resources at the disposal of the Murree Division in terms of engineers machinery are being mobilized.

The ISPR father said that a Control Division has been established at Murree Division.

It said that Rescue Centres has been established at Army Public School (APS) and Army School of Logistics Kuldana, and all Camps have been provided with heating arrangements.

The ISPR said that heavy machinery from Murree, Army Engineers Division and FWO are working without any pause to assist people who are struck. It said that where machinery can’t reach, troops have been moved and they are clearing traffic and opening roads.

The Opposition Leader Shahbaz Sharif said that “What a massive tragedy Murree is turning out to be! Heartbroken to learn about the loss of so many precious lives. My profound condolences & sympathies are with the bereaved families. May Allah rest the departed souls in peace!”

Meanwhile, according to the Pakistan Meteorological Department, more widespread rain with snowfall over the hills is expected in Khyber Pakhtunkhwa, Islamabad, Upper and Central Punjab, Gilgit-Baltistan, and Kashmir during the next 12 hours.