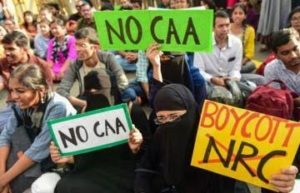 Opponents of the said bill say the law is exclusionary and violates the secular principles enshrined in the Constitution of India, as well the UN’s Charter of Human Rights. They justifiably argue faith should not be made a condition of Indian citizenship. The bill provides citizenship to religious minorities from Pakistan, Bangladesh and Afghanistan.

The government, led by the Hindu nationalist Bharatiya Janata Party (BJP), says this will give sanctuary to people fleeing religious persecution. Let’s be clear: The law isn’t truly about protecting the region’s religious minorities. Instead, it challenges India’s secularism by making religion part of the basis for citizenship.

After its passage from the Indian Parliament, country-wide violent protests were seen which killed dozens of people besides wounding thousands.

It’s not Muslims only, but all others minorities and the lower caste Hindus and Dalits, who have joined these massive anti amendment protests.

Protest started in and around Delhi in some educational institutions and universities on 12 December 2019 and since then, it has been fast spreading. It has now spread to small towns and villages in India and all over world from London to California.

Surprisingly, a large number of female students are at the forefront of this rapidly unfolding protests against Modi’s authoritarian regime. Organizations representing Dalits and Christians have been taking part in the protests. Thirteen Indian states are suffering from the fire of the CAA.

The USA and the Gulf Countries have issued warnings to their citizens to not go to the specific states of India to avoid any danger. Violence is a high-risk option as it often brings backlash from the regime.

If goes back into the history then, we can find that India took almost seven decades in creating an image of being a secular, democratic, liberal, progressive and tolerant society but it consumed barley seven years to burst that fake bubble.

Elections of 2019 became a watershed for a new India, the contest between Gandhi’s ideology and Godse’s belief (killer of Gandhi, who belonged to RSS) was decisively won by radicals and India entered an uncharted territory of establishing of Hindutva Republic, decimating liberal India beyond recognition.

The Hindu India however could only be achieved by squeezing minorities financially, stripping them of their rights, degrading them to a lower category of citizens, disregarding their religious beliefs and surrounding them in a suffocating cauldron where either they convert or leave Bharat Mata (Mother India).

Since then, world observed an exponential rise in rapes, mob lynching and killings all across the country with public calls for mal-treating minorities, especially for Muslims are reflective of the ripple effect of new policies.

Internationally, India is facing criticism and denunciation of its new law. After the citizenship law’s approval, a State Department spokesperson said, “The United States urges India to protect the rights of its religious minorities in keeping with India’s constitution and democratic values.” Sam Brownback, the US envoy on religious freedom, voiced respect for India’s institutions.

However, he said the United States was “concerned” with the citizenship bill, and called on India to “abide by its constitutional commitments.” The US Commission on International Religious Freedom called for sanctions on India if the CAB passed, calling the bill a “dangerous turn in the wrong direction.”

Without the shadow of doubt, Modi is advocating a brand of religious nationalism that views India as fundamentally a Hindu nation and there are now “official” campaigns in the country to force non-Hindus especially Muslims to either convert to Hinduism or leave India. The episode of Babri Masjid, non-permission for construction of mosques, lynching of Muslims in the name of protecting cows, discriminatory citizenship bill, denial of government jobs and brutalities being committed against Kashmiris are a few example to substantiate the belief that the theory is not ‘dead’ as claimed by Indira Gandhi in 1971.

Writer of this article Matthias Samuel is a student in Quaid e Azam University Islamabad and is a blogger. The views and opinions expressed in this article/Opinion/Comment are those of the author and do not necessarily reflect the official policy or position of the Dispatch News Desk (DND). Assumptions made within the analysis are not reflective of the position of Dispatch News Desk.

Mati
Mati-Ullah is the Online Editor For DND. He is the real man to handle the team around the Country and get news from them and provide to you instantly.
Share
Facebook
Twitter
Pinterest
WhatsApp
Previous articleDaraz launches express delivery in 19 cities to enhance customer experience
Next articleNumber of Health Cards issued by PTI government in the Country