ISLAMABAD, Pakistan: The Chinese Ambassador to Pakistan H.E. Nong Rong met the Minister of State for Information and Broadcasting Farrukh Habib in Islamabad on Tuesday, and exchanged felicitations on the successful completion of 70 years of diplomatic relations between China and Pakistan.

The minister of state told the ambassador that China is the iron brother and all-weather friend of Pakistan which always stood by Pakistan in difficult times.

Farrukh Habib said that Karakoram Highway is a testament of our strong friendly relations. He said that the people of Pakistan have very favorable sentiments for China and keep Pakistan, China friendship in high regard.

The minister also congratulated H.E. Nong Rong on the completion of 100 years of the establishment of the Communist Party of China (CPC). 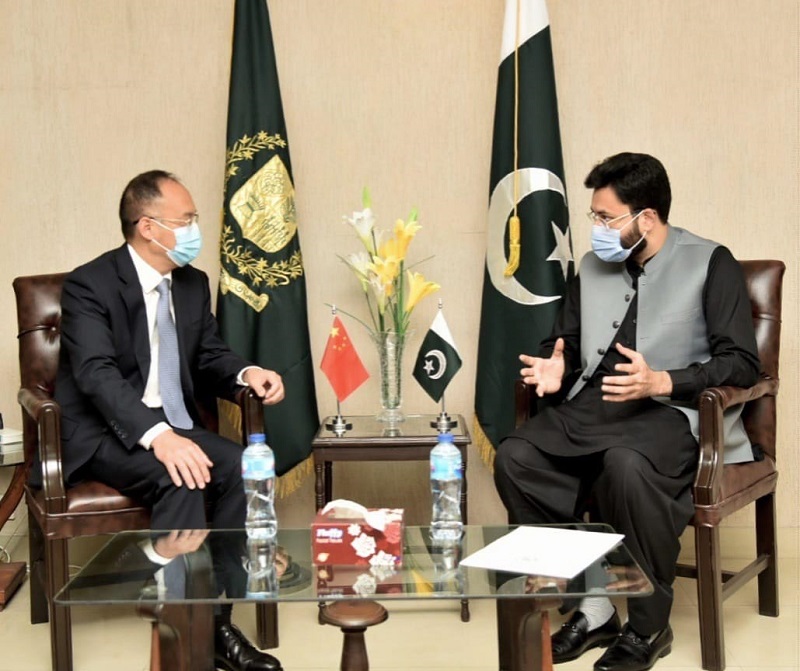 The state minister also thanked the ambassador for the Chinese help to Pakistan in wake of the COVID-19 pandemic and on the provision of vaccine. He praised the Chinese quick response to COVID-19 which saved many precious lives.

Farrukh Habib further said that Pakistan’s response to COVID-19 under the leadership of Imran Khan was effective and was also praised by the World Health Organization (WHO).

The state minister said that Belt and Road Initiative (​BRI) is a great initiative of regional connectivity of which China Pakistan Economic Corridor (CPEC) is a flagship project.

The minister of State also called for the need for Pakistani and Chinese Companies to undertake joint ventures in the Textile Sector.

Farrukh Habib also highlighted the need for city-to-city cooperation, research, and cooperation on social protection programs between China and Pakistan.

The world in large and Pakistan, in particular, can learn a great deal from China on how it successfully brought 700 million people out of poverty.

The minister of state expressed pleasure over the extension of CPEC beyond infrastructure development to social and agriculture cooperation.

The minister emphasized the need for cooperation and close coordination between Pakistan and Chinese Media Industries. There are already MoUs signed between PTV and CCTV, APP, and Xinhua.

Both Countries need to extend the cooperation to the film industry, the State Minister further said.

The Chinese ambassador said that Pakistani media has played an important role to disseminate information regarding CPEC, dispelling propaganda from countries hostile to CPEC.

Ambassador Nong Rong also emphasized on strengthening B2B cooperation and said that trade is a good beginning for all kinds of cooperation.

The Minister of State Farrukh Habib appreciated and praised the vision of the Chinese President Xi Jinping for regional connectivity and the promotion of trade. He also extended an invitation to H.E. Nong Rong to visit Faisalabad.