China’s Model of Development—Lessons for Pakistan

Brief Introduction of the Book

The Book gives an eyewitness account of China’s astounding transformation from 1979 to 2019, with a Postscript on how China dealt so successfully with Corona Virus Pandemic in 2020. The Author has spent a decade in China in two diplomatic assignments in Pakistan Embassy in Beijing during two epoch-making eras of 1980-1987 and 2001-2003. He has also visited China subsequently more than a dozen times. He has witnessed personally from Ground zero and the vantage point of Beijing, as how the Reformist leadership under Deng Xiaoping confronted the deep-rooted challenges of the Centrally Planned Economy’s transition to a Socialist Market Economy. The Booklists the hard decisions, Comprehensive Reforms, and Policy Initiatives that permeated all sectors of Chinese life, society, governance, economy, foreign relations, and worldview etc.

China’s progress and success on this scale were never even within the wildest imagination of China Watchers abroad or in China itself. The absence of China’s expertise globally has left many in the Western world shocked to know of China’s rise, while it has left many of its friends, allies, and well-wishers in the Developing countries of Asia, Africa, and Latin America equally mesmerized. No amount of adverse propaganda can revert the clock of history! China has achieved in four decades (1979-2019), which took the Western world 400 years to achieve. China did it all on the strength of its Cultural heritage, governance system, visionary leadership, and Soft Power.

The Author feels that China’s rise is still in its initial phase. It, however, offers some very useful lessons for all the Developing countries, particularly Pakistan. Pakistan for a number of reasons is best placed to emulate China’s success story, but for this to happen, Pakistan needs to adopt multifaceted, home-cooked Comprehensive Policy reforms, take hard decisions, tackling squarely the challenges it has avoided so far. The ruling elite of Pakistan needs a ‘mindset change’ and be prepared to revive the national institutions, structures, and governance, to harness the underlying potential of the country. Pakistan is among the ‘best blessed and placed countries for the Future’. Pakistan only needs to get out from the specter of despondency, dependency, debt trap, and decline, of its Development template, by adopting the sustainable shortcut provided by ‘China’s Model of Development’. China learned from the world. It is now the turn of the World to learn from China. 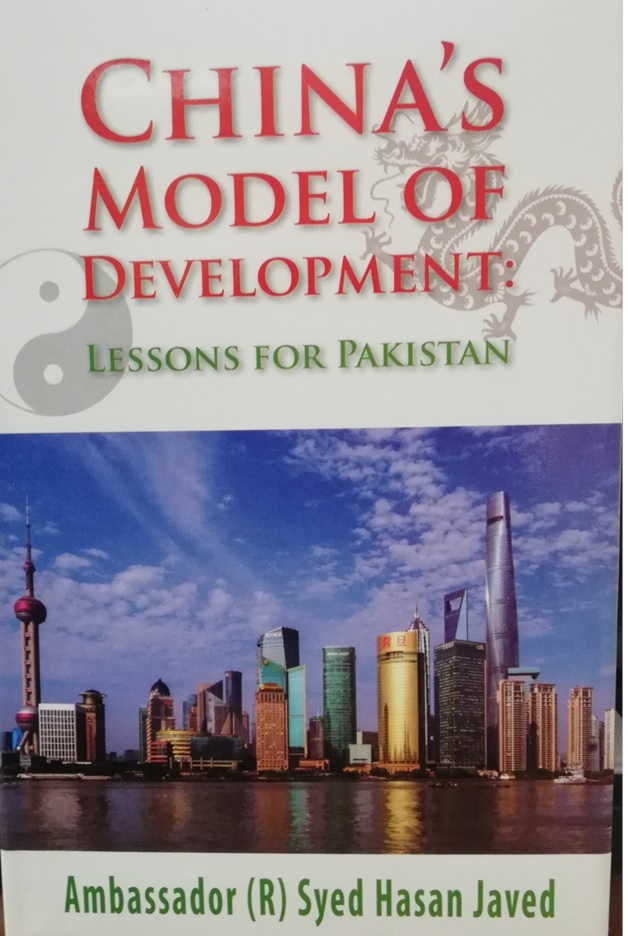 Pakistan stands in 2020, where China stood in 1980, India in 1990, Vietnam in 2000 and Bangladesh in 2010, before Comprehensive Policy Reforms, was undertaken in all these countries. Look where they are! Pakistan should be learning ‘Fishing’, instead of asking ‘Fish’ from China. What can indeed lift-off Pakistan are a set of homegrown Comprehensive Policy Reforms in all sectors of society, by an honest collective Capable leadership with new ideas, innovation, creativity, troubleshooting, restructuring, soft power revolution. etc. The Western Powers have been waging Hybrid War against Pakistan using the ‘twin tack teams’ of International Financial Institutions (IFIs) and the Ranking and Rating Teams. The other plank of this sustained degrading of Pakistan’s potential for economic takeoff, has been implemented by Pakistan’s own feudal, tribal, and liberal elite in cohort with Hitmen of the Breton woods System, to avert change. For example, both IMF-led democratic governments (2008-2018) in fact competed to leave behind a worse economic legacy. Nearly US$66 billion was added to Pakistan’s debt since 1989 when Pakistan entered IMF Stabilization Program. Before 1989, Pakistan’s economy was doing better than either India or Bangladesh. In fact, India had to mortgage its 70 tons of Gold Reserves with the Bank of England in 1991, as settlement of its loan repayments. The discredited IMF Template is now being repeated with the current regime. As the economic meltdown continues, the government will be given ‘Thumbs up’ for the deft handling of so-called reforms (nowhere to be seen except in the obscure Reports of the IFI Institutions). The main objectives of the current IMF Program remain to decimate economic growth, increase the debt burden and neutralize the CPEC. This has been strategically ‘choreographed’ to ensure that Pakistan’s economic takeoff, does not take place in order to ensure the domination of India in South Asia.

In 1979, China had more than 89 percent population under poverty with the US $2 per day, with almost 70 percent of them living in the rural areas. That meant nearly nine out of ten Chinese living in Poverty. In 2018, there are still 30 million people in China below the Poverty line of 2 US$ a day. This means less than 1 Chinese out of 100, still living in Poverty. In November 2015, the State Council issued theDecision on Winning the Fight against Poverty’. The anti-Poverty efforts are unparalleled in terms of their intensity, scale, and impact. China has achieved decisive progress in this respect. Rightly so, poverty is now targeted to be ‘zero’ by 2020. Since 2010, China is credited to have launched the ‘Targeted Poverty Alleviation’ with several initiatives including microcredits to households in extreme Poverty, relocation from inaccessible areas, use of digital revolution, E-commerce, agro Innovation, use of drones etc. In global history, China’s success in ‘Poverty Alleviation’ is unique, as it was triggered by ‘Reformist Policies and Innovative initiatives’, instead of high sounding official or ideological decrees and launching of megaprojects. China learned from its mistakes and adversities, by first acknowledging and then rectifying them through a result and delivery-oriented Program under collective leadership. In most other developing countries, the poverty alleviation programs talk for ‘political expediency’ or electoral reasons. These are launched with the blessings of International Financial Institutions(IFIs) at the podiums of five-star hotels.

The result is invariably catastrophic with an increase in poverty as the funds are more often siphoned off by the officialdom.   On the other hand, in China, in the early days of reforms in the 1980s under statesman Deng Xiaoping, poverty alleviation was achieved through empowering the farmers to develop the ‘entrepreneurship mindset’, becoming the masters of their destiny. The farmers and the Korean war veterans were the first chief executive officers(CEOs) of ‘Township Village Enterprise’ (TVEs). Farmers were allowed to take their own decisions in line with the supremacy of the Market Mechanism. Farmers were to be no more forced to produce steel in backyard furnaces, as indeed was done during the Great Leap Forward’ era from 1958-62. The failure of this Policy had resulted in a catastrophic famine in which nearly 30 million Chinese people perished, as per credible estimates.

China took full advantage of the opportunities made available by globalization, industrialization (Outsourcing) hybridization, and digitalization to harness its advantage in human capital to become the largest workshop’ in the world. The success of its ‘Proto- Industrialization’ reflected through ‘Township Village Enterprises’ (TVEs), Reforms of the ‘State-Owned Enterprises’(SOEs), and Special Economic Zones’(SEZs) all combined to transform centuries-old poverty landscape like never before. The ‘Marxist Leninist’ ideology promoting the socialist central planning from 1949-1979 depended on ‘Chi Da Guo Fan’, meaning ‘Eating from the same Iron Rice Bowl’ making ‘China the largest Orphanage of the world’. China’s Visionary Statesman and Reformist Leader Deng Xiaoping realized that it was neither sustainable nor desirable.  China needed to change course and it did change course, under his sagacious leadership! China’s development experience provides an opportunity for a fresh look at Pakistan’s own development paradigm’. The presence of an honest collective, visionary leadership, prepared to acknowledge mistakes/policy missteps, ideology for an Inclusive Society, Chinese characteristics revival (Soft power), avoidance of limelight, crossing the river by feeling the stones, etc. were some of the major declaratory policy statements of Deng Xiaoping, the architect of modern China. He thought about the long term, took hard decisions, and kept the IFI and IMF Hitmen, away from policymaking. The main contours of ‘Reforms and Open Door Policy’ launched by China under Deng Xiaoping at the 3rd Plenum of the 11th Congress of the Communist Party in December 1978 included: the establishment of rule of law, greater freedom, individual rights, adoption of economy state paradigm, end to security paranoid, establishing united front, investment in higher education, reverse engineering, import of advanced technology, the formation of joint ventures, the establishment of SEZs, mobilization of overseas Chinese, etc.

The other policy initiatives included the adoption of 4-Point Modernization Program; launching of agriculture household responsibility system; free enterprise; market economy; incentives package for FDI; harnessing of global best practices; globalization; economic diplomacy; hybridization and outsourcing by Multinationals; reverse engineering; import of advanced technology; launching start-ups; simplification of rules and procedures; ease of doing business, downsizing of civil service; governance reforms; restructuring; streamlining of recruitment; promotions, transfers, and retirement;  rooting out corruption; legal reforms; mediation courts; use of artificial intelligence in the judiciary; effective border controls; strengthening of the police system, etc.  The soft power values were promoted through media, public institution mediums, and educational institutions. These values included humility, discipline, teamwork, patience, passion, tact, rationality, moderation, pragmatism, solidarity, hard work, etc. With the completion of big-ticket 22 ‘early harvest projects’ worth US$20 billion, the most promising yet the most challenging second phase of CPEC (2020-2025) i.e. the development of Industrial Zones and Special Economic Zones(SEZs), has begun. Pakistan needs to attract Chinese private sector investors, with an additional incentives package. Their investment in ‘Small and Medium Enterprises’(SMEs) by way of ‘Joint Ventures’ will bring in 90 percent of the investment envisaged under CPEC’s medium and long-term programs. The existing policies are inadequate. Foreign investors never invest on level playing fields. Pakistan has unfortunately become a ‘captive market’ for existing monopoly investors, who blackmail the government and discourage the newcomers. CPEC is means to an end i.e. Economic take-off of Pakistan. CPEC will become only ‘supply-side economics’, or a ‘missed opportunity’ at worse, without policy reforms, unable to trigger ‘Economic Take off’. It is ironic that countries like India, Vietnam, the Philippines and Bangladesh are learning lessons from China’s development experience, whereas Pakistan despite having close strategic ties, is lagging far behind. Pakistan’s feudal, tribal and liberal elite need a mindset change in the long-term interest of Pakistan and themselves.

Most of the recommended new policy initiatives are related to the domain of good governance. Bureaucracy cannot do it alone! Only Academia, Industry, and Government can deliver by working together. For instance, over the past seven decades in Pakistan’s rural sector, there is a lack of rural industrialization, rural credit market and banking coverage, widespread destruction of the cottage industry, and insignificant attention to the SMEs. The resultant consequences have been low rate of domestic savings, tax collection, FDI and low fixed capital investment, low factor productivity, poor innovation, backward vocational & Technical Skills. absence of ‘soft infrastructure’, high cost of doing business. Only homegrown ‘Comprehensive Policy Reforms’ ensuring good governance, wealth creation, re-industrialization, Start-up revolution, the revival of soft Power, etc. can enable Pakistan’s economic takeoff.  Economic growth and industrialization come at a price.  Only hard decisions by a visionary leadership enabled China to break the vicious cycle of poverty. Pakistan’s universities also need to introduce urgently ‘China Studies Modules’ for human resource development not only for CPEC but for the global market. China’s Model of Development or China’s development experience can help Pakistan too!

Ambassador (Retired) Syed Hasan Javed served as Pakistan’s Ambassador to Germany, Singapore and Mauritius. He worked in China in two diplomatic assignments for nearly a decade. He speaks fluent Chinese and is an Author of Seven Books on China. Since 2016, he is the Director of the Chinese Studies Centre, National University of Science and Technology (NUST), Islamabad.