ISLAMABAD, Pakistan: The Pakistan-China Institute (PCI) on Tuesday organized a roundtable discussion on the topic “CPEC: The Way forward” in Islamabad.

The roundtable had keynote by the Chief Economist of China Center for International Economic Exchanges (CCIEE) Dr. Chen Wenling, affiliated with the State Council in Beijing, which is directly under the Chinese Prime Minister Li Keqiang.

While addressing the participants, Dr. Chen Wenling said that China took a lot of time and invested a lot of hard work in reaching where it is today. China lifted 700 million people out of poverty and raised life expectancy to 85 years from 40 years.

Dr. Chen Wenling said that China wants to see Pakistan progressing similarly and for this purpose China will always support Pakistan, with China has a relationship that is ‘exceptional’ and these special ties are with no other Country. 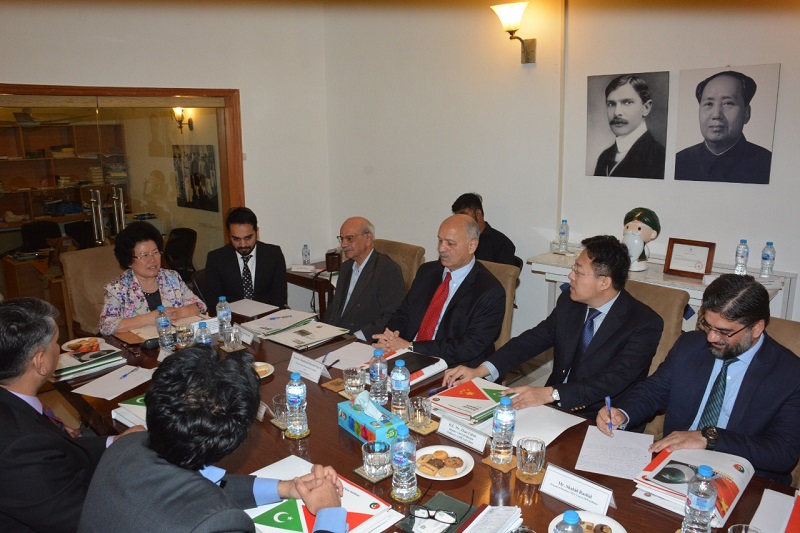 The Chief Economist of CCIEE further said that Pakistan’s agricultural capacity should be utilized to stimulate growth and that she would want to see rapid development under CPEC alongside the route from Kashgar to Gwadar.

Dr. Chen Wenling also specifically focused on strengthening the Renminbi by trading in Chinese currency and subsequently improving the value of the Pakistani rupee, which suffered significantly against the US dollar.

Referring to the two Countries, she emphasized that we must not get influenced by the pressures imposed by the external forces and continue to strengthen our bilateral relations.

While appreciating Dr. Chen Wenling’s views, the Chairman of the PCI and the Chairman of Senate Foreign Affairs Committee Senator Mushahid Hussain Sayed said that during President Xi Jinping’s visit to Pakistan in 2015, 52 agreements were signed between the two Countries to expedite work on CPEC, and thus Pakistan had already rejected any external pressure as it a resilient country that has resisted such pressures in the past.

Mushahid Hussain Sayed was thankful to China for such unflinching support and commitment towards Pakistan.

“Pakistan has resisted external pressure in the past and will be doing so in the future as well…The trust between Pakistan and China will help sustain CPEC and Pak-China relations,” Lt. General (retd) Asad Durrani said. “There are no two Countries that trust each other more, like Pakistan and China do.”

The Chairman Pakistan LNG Dr. Manzoor Ahmed, who has previously served as the Ambassador of Pakistan to WTO, contributed to the valuable discussion by saying that “Pakistan needs to improve international trade as no Country can progress if it remains a closed economy.”

Dr. Manzoor Ahmed further added that “We as a nation will never grow if we do not promote competition.”

Moreover he said that “CPEC is a great opportunity for Pakistan but we need to initiate reforms internally to keep our pace with CPEC.”

The roundtable was also enriched by the views of notable personalities including the Executive Director CPEC Centre of Excellence Dr. Shahid Rashid, the Director CPEC at Ministry of Foreign Affairs Siraj Ahmed Khan, the Director China-Pakistan Study Centre at the Institute of Strategic Studies Dr. Talat Shabbir and the Deputy Chief of Mission at the Chinese Embassy Zhao Lijian.

Mati
Mati-Ullah is the Online Editor For DND. He is the real man to handle the team around the Country and get news from them and provide to you instantly.
Share
Facebook
Twitter
Pinterest
WhatsApp
Previous article215th Corps Commanders’ Conference held in Rawalpindi
Next articlePFUJ announces protests against Karachi Press Club raid & Journalist Nasrullah Chaudhry’s arrest