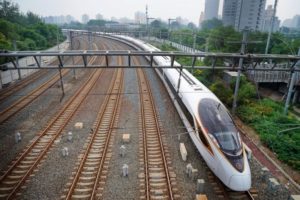 BEIJING, China: China has launched the Smart Train G8811, a high-speed train with a capacity to run with 350 kilometers per hour speed, the Azerbaijan’s State News Agency AZERTAC reported.

The train will run between Beijing and Zhangjiakou, the two Co-host Cities of the 2022 Winter Olympics.

It left the Beijing North Railway Station formerly known as Xizhimen Railway Station at around 8:30 am on December 30 for Zhangjiakou, a City in Chinese in northwestern Hebei Province.

For the train, a 174 kilometer-long railway line has been laid having 10 Stations along with it.

With the 350 kilometers per hour speed, the train will reduce the travel time between Beijing and Zhangjiakou from over three hours to 47 minutes, facilitating inter-city traffic and crucial for the Co-host of the 2022 Beijing Winter Olympics.

Mati
Mati-Ullah is the Online Editor For DND. He is the real man to handle the team around the Country and get news from them and provide to you instantly.
Share
Facebook
Twitter
Pinterest
WhatsApp
Previous articleJammu Kashmir Coalition of Civil Society confirms rapes, killings and abduction of Kashmiris by Indian Army
Next articleYear 2019 was a successful year for Pakistan in Diplomatic Arena