Changan Lumin Corn | A Mini EV Into The Market 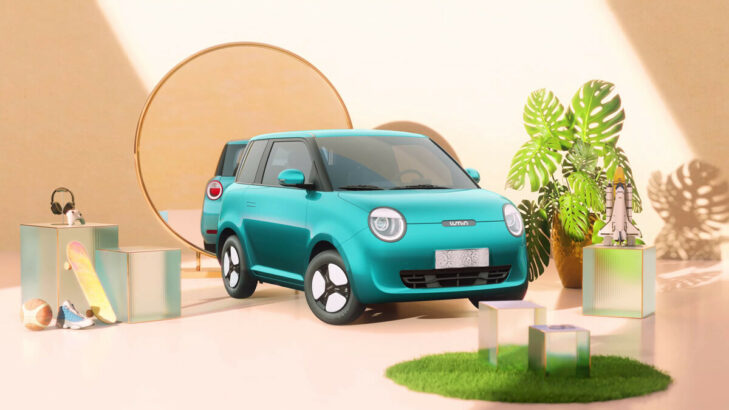 Chinese media informed us that the Changan is going to launch its 2 new mini variants of electric Avatar Lumin Corn. One of them is powered by a 35 kW LFP battery from CALT that can generate 48 horsepower and has a range of up to 210 kilometres. Whereas the other one comprises a 30 kW LFP battery from Gotion Hightech which can generate 41 horsepower and which have a range of up to 150 kilometres. Both the variants have a maximum speed of 101 km/h.

On Changan’s official social media channel an animated video is circulating about this new vehicle. Detailed information is available in the video about the car’s interior and exterior. It consists of just two doors, four-seat circular LED lights, pop-out door handles, and engine push-starts.
In the interior infotainment screen, an LCD metre, a climate control system, a flat-bottom steering wheel, and more decks.

As Changan Lumin Corn competes with Wuling, likewise, it will compete with other Chinese electric hatchbacks. The competitors include Chery QQ Ice Cream, Chery eQ1, and Baojun Kiwi EV.

Since the company released it, lots of people endorsed the car for its low price and compact design. Moreover, Changan Lumin Corn’s price ranges from 28,800 yuan to 50,600 yuan. Using Changan’s “glutinous corn” as a benchmark should have a related end price.

This new model of EV in the market is going to be a new addition to the EVs. Since all the others are either Sedans or SUVs, this mini Ev will come out as a companion for middle-class people. So, they could also enjoy the benefits of an electric car. While the elites could afford the luxurious cars, this is just the right invention for the middle class.

Duaa Naeem
Duaa Naeem is a fresh graduate who is utilizing her writing skills into writing articles that are informative for the readers.
Share
Facebook
Twitter
Pinterest
WhatsApp
Previous articleHow To Get Cheap Airline Tickets?
Next articlePTI Lahore Public Meeting: Is Imran Khan threatening the State of Pakistan?