ISLAMABAD, Pakistan: The Center for Global & Strategic Studies (CGSS) and the Area Study Centre (Russia, China & Central Asia) at the University of Peshawar jointly organized an “Online National Conference” on Wednesday on the topic “Post Doha Agreement Afghanistan: Implications and Options for Pakistan”.

The Conference was organized to analyze the peace deal between the US and the Taliban and its implication for Pakistan.

The Senior Journalist Rahimullah Yousafzai stated that the Doha peace agreement is still holding if not working and it is the biggest opportunity to bring peace if implemented in its true spirit.

Rahimullah Yousafzai said that the issue of releasing the prisoners is the biggest hurdle now which does not seem to resolve easily. The Afghan government stated that it will release 1,500 prisoners instead of 5,000 which were agreed in the Doha agreement. 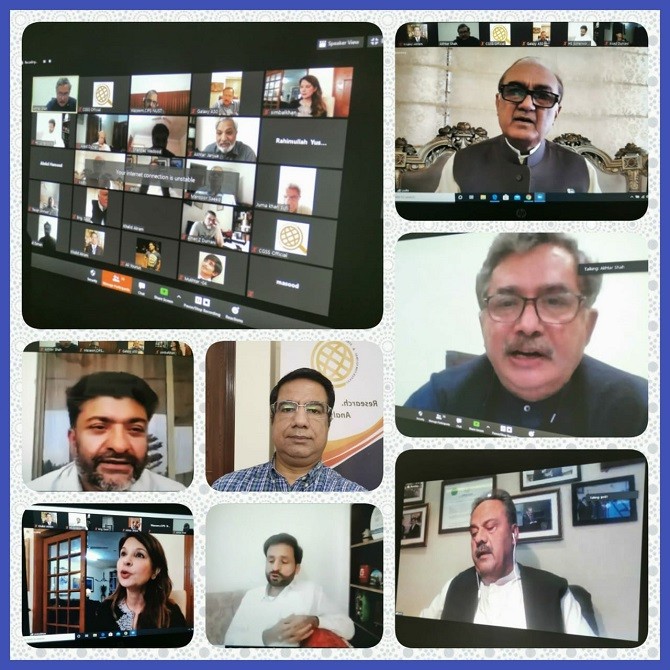 The Senior Journalist said that If the Afghan government does not release the prisoners as per the agreement than the Taliban will not take part in Intra-Afghan negotiations. There has been an agreement on power-sharing and its terms have been already discussed.

The former Federal Defense Minister & Senior Member Advisory Board CGSS Lt. General (retd) Naeem Khalid Lodhi stated that many clauses of the Doha agreement have not been shared.

Lt. General (retd) Naeem Khalid Lodhi said that the US is not leaving Afghanistan willingly and still has interests in the region due to Russia, China, Iran, Pakistan, CPEC, and the Indian Ocean.

However, the US will pursue its interests through other means. There are many other fractions involved in Intra-Afghan Dialogue other than the Taliban and the Afghan government.

The Member Advisory Board CGSS said that Pakistan must keep playing the role of a facilitator in the process as peaceful, stable and friendly Afghanistan is in the maximum interest of Pakistan.

The former Secretary at Home and Tribal Affairs Department in Khyber Pakhtunkhwa Dr. Syed Akhtar Ali Shah while highlighting the capacity of the stakeholders stated that it is necessary to understand the perception of different stakeholders in the peace process.

Dr. Syed Akhtar Ali Shah said that the Taliban’s aim is to establish an Islamic emirate and have their own interpretation of Sharia. Structural amendments are required in the Constitution of Afghanistan as currently, it is centralized.

The former Secretary said that if Intra-Afghan Dialogue does not succeed than Afghanistan may submerge into a civil war.

However, it has the potential to end the fight if the signatories are sincere in implementing the terms of the agreement.

The Director at Institute for Peace & Conflict Studies in the University of Peshawar Professor Hussain Shaheed Soharwardi stated that swap of business is not taking place which is most significant.

Professor Hussain said that Afghanistan is in a civil war and the Afghan Army is fighting on numerous fronts including Taliban, IS and other extremist fractions, and reduction in its military assistance and training will destroy the fight against terrorism, militarily and Doha peace deal, politically. He said that Afghanistan’s strategy has been continuously revised on many occasions due to its intricacies.

The Consultant UNDP, Expert on Afghanistan Dr. Simbal Khan highlighted the existence of divergent forces within the Afghan Government and the negotiating team.

Dr. Simbal Khan stated that the Ghani government is using delaying strategies and looking at the results of the US elections in November 2020. The Ghani faction is not interested in any end or meaningful settlement. They are status quo actors and their power is linked to the continuation of US military and economic support even if it is shrinking. Iran and other regional countries as well as multilateral institutions must be involved.

The Director at Area Study Centre (Russia, China & Central Asia) in the University of Peshawar Professor Dr. Shabir Ahmad Khan stated that whatever happens in Afghanistan is more important for Pakistan than happenings in any other state in historical and geographical perspectives.

Dr. Shabir Ahmad said that the United States has taken many policy turns on the region during the last two decades or so. He said that the US might be serious in withdrawal because of the election year. The division of Afghanistan on an ethnic or sectarian basis will have catastrophic consequences for its neighbors.

The Professor at the IR Department in the University of Sargodha Dr. Ashfaq Ahmad stated that the peace deal is an opportunity for bringing stability in Pakistan and across the region.

Dr. Ashfaq Ahmad said that the two important aspects include the release of the prisoners and the US breaching the peace deal. Certain fractions in Afghanistan believes that this agreement has legitimated and recognized the Taliban.

The former Ambassador of Pakistan to Iran and Afghanistan Ambassador Asif Durrani stated that the Taliban have not yet agreed to a ceasefire which is most significant and crucial for any agreement.

Ambassador Asif Durrani said that if the US follows the timeline of the agreement only then we can talk about prospects and success of the dialogue. The role of the natives including Iran, Pakistan, China, and Russia, and the attitude of the Taliban is also very important.

The President CGSS Major General (retd) Syed Khalid Amir Jaffery concluded the Conference and stated that developments in Afghanistan are taking place quickly and its future is uncertain. He said that the US at this time is not showing too much of interest in Afghanistan and the EU has been given the task to be more active on this front.

The Conference was moderated by the Executive Director CGSS Lieutenant Colonel (retd) Khalid Taimur Akram and was attended by 52 participants, and was followed by an interactive question and answer session.