ISLAMABAD, Pakistan: The Center for Global & Strategic Studies (CGSS) on Tuesday organized an Online Conference on ‘Evolving Strategic Environment in the Indian Ocean Region and Significance of AMAN Exercise 2021’.

The Conference was held at an important time when the seventh edition of the Multinational Maritime Exercise Aman-2021 will be held in Pakistan from February 11 to 16, 2021.

The Conference highlighted the potential and importance of the AMAN exercise by the Pakistan Navy as well as the significance of the current geopolitical & geostrategic environment in the Indian Ocean Region.

In the Opening Remarks, the Regional Geopolitical Analyst & Member Board of Experts CGSS Dr. Mehmood Ul Hassan Khan said that the diversity of panelists having rich experience showcase the positive and productive role of CGSS in highlighting Pakistan’s maritime potential at the global level. 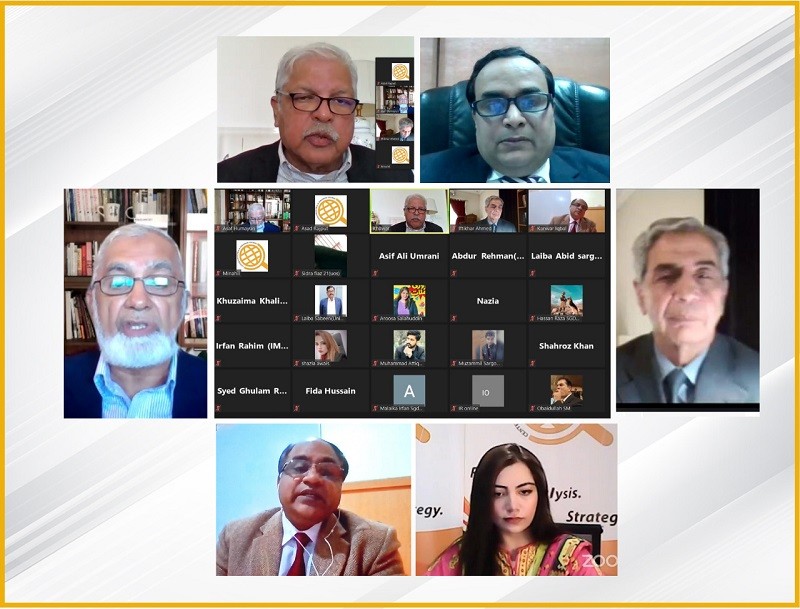 The former Vice Chief of Naval Staff Vice Admiral (retd) Asaf Humayun presented the keynote speech and highlighted the significance of AMAN exercise for regional peace and security. He said that the complex nature of maritime security requires collaborative efforts by the regional and extra-regional powers. He said that Pakistan is playing a key role in enhancing maritime security cooperation. He also elaborated comprehensively on the recent major developments in the international geopolitical landscape.

Vice Admiral (retd) Asaf Humayun concluded by appreciating the efforts of the Pakistan Navy in organizing and conducting the AMAN exercise and stated that in this changing scenario of cooperation, coalition, containment, and confrontation, Pakistan has been holding AMAN series of joint maritime exercise with its focus on eliminating maritime terrorism, piracy, drug trafficking, arms smuggling besides natural calamities. AMAN brings the navies of diverse nations together in its spirit of maritime cooperation. He said that this effort would boost maritime cooperation at the international level.

The former Deputy Chief of Naval Staff Vice Admiral (retd) Iftikhar Ahmed Rao discussed the geostrategic significance of the western Indian Ocean region and important aspects of the ocean including the Gulf sea lanes, Suez connecting the Atlantic and Indian Ocean through the Mediterranean, the choke points, cape routes, and ocean economic resources.

Vice Admiral (retd) Iftikhar elaborated the important Gulf oil trade routes i.e. Strait of Malacca, Strait of Hormuz, and Babul-Mandab strait as the key chokepoints. He also highlighted the importance of the AMAN exercise by stating that it is directed towards addressing common maritime challenges in the region.

Moreover, it is an inclusive platform that is open for all Countries. The focus of this series is on maritime diplomacy and peace. AMAN plays a prominent role in creating a positive image of Pakistan, especially in the maritime realm.

The former Ambassador of Pakistan to Maldives and the former Director General National Institute of Maritime Affairs Vice Admiral (retd) Syed Khawar Ali Shah profoundly discussed the evolving strategic environment in the Indian Ocean Region and the significance of AMAN 2021. He said that the Indian Ocean has distinguished regions and thus a bulwark created against hegemonic designs. He also explained China’s role in connecting the region through trade linkages and financial assistance.

Vice Admiral (retd) Syed Khawar Ali Shah said that the strategic maneuvering of China is rising in the Indian Ocean that has also increased the economic activity. He said that Indians see the Indian Ocean as their lake and have started establishing bases in Mauritius, started increased engagement with Myanmar, etc. They are trying to match the Chinese, however, they lack economic power. Admiral Khawar stated that the main driver in the present era is the geo-economics rather than geopolitics. China’s maritime silk route under the BRI is extremely important in this regard, which has a key role in connecting nations.

The former envoy also explained the legal aspects and laws related to the sea. He concluded that there is the need to cooperate at a bigger level to attain peace and stability of the region in which Pakistan is playing a huge role by AMAN exercise to demonstrate peaceful co-existence.

The Regional Geopolitical Analyst & Member Board of Experts CGSS Dr. Mehmood Ul Hassan Khan gave an analysis on the strategic role of the Pakistan navy in CPEC and the Indian Ocean region. He said that the CPEC project is revolutionizing the connectivity and regional discourse.

Dr. Mehmood Ul Hassan Khan also highlighted the integrated efforts of the Pakistan Navy for the defense of the Country’s seafronts and providing security to the CPEC project including the Gwadar port. He said that the success of CPEC is directly correlated with Pakistan Navy operationalization and channelization. He further stated that the Pakistan Navy being the custodian of blue economy coastal areas, shores and waters is utilizing all possible means and resources to safeguard the country’s security and commercial interests of CPEC. Its strategic partnership with China and Turkey is a game-changer. Global and regional developments like the emerging Asian NATO comprising of India, the US, Japan, and Australia, activation of the US warship in the Arabian sea, Indian conflicting socio-economic policies against BRI and CPEC, widening geopolitical US-China competition, and last but not the least the booming Indian US strategic dialogue partnership all have compelled Pakistan Navy to start its rigorous modernization with sustainable cooperation with China to promote regional peace and harmony.

The Senior Research Fellow NIMA Kanwar M. Javed Iqbal comprehensively talked about enhancing maritime and security cooperation among the Indian Ocean Countries. He explained that IOR has immense significance. He elaborated on the prospects of cooperation through BRI that provide new avenues in harnessing connectivity in IOR and its littoral states.

Furthermore, he also explained the positive role of China in maritime diplomacy. He discussed the strategic importance of the Gwadar port that will allow China to solve its Strait of Malacca dilemma.

Kanwar M. Javed Iqbal concluded that peace and stability are needed to increase maritime economic growth. He also said that maritime non-traditional issues need cooperative and collaborative effort at the regional and international levels. He appreciated the Pakistan Navy’s efforts and commitment in combating threats at sea through the series of AMAN.

The Conference was moderated by the Research Executive CGSS Minahil Shawal Afridi, and was attended by more than 80 participants from all across Pakistan.

Mati
Mati-Ullah is the Online Editor For DND. He is the real man to handle the team around the Country and get news from them and provide to you instantly.
Share
Facebook
Twitter
Pinterest
WhatsApp
Previous articlePresident seeks Business Community’s role in maximizing tax collection
Next articleAJK president for devising strategy to foil India’s plan of demographic change in IIOJK