ISLAMABAD, Pakistan: The Embassy of the Republic of Kazakhstan in Islamabad and the Center for Global & Strategic Studies (CGSS) jointly organized a Webinar on “The Leadership Phenomenon of the first President of Kazakhstan His Excellency Elbasy N. Nazarbayev”.

The Session was commenced with the opening remarks by the President CGSS Major General (retd) Syed Khalid Amir Jaffery.

The President CGSS said that it is an honor for CGSS to organize this Webinar dedicated to Nursultan Nazarbayev, the national leader of Kazakhstan.

Major General (retd) Syed Khalid Amir Jaffery said that Pakistan has very close ties with Kazakhstan, and it was among the first countries to recognize the newly independent state of Kazakhstan and the diplomatic linkage between the two Countries formally began in 1992 with the official visit of Nursultan Nazarbayev to Pakistan. 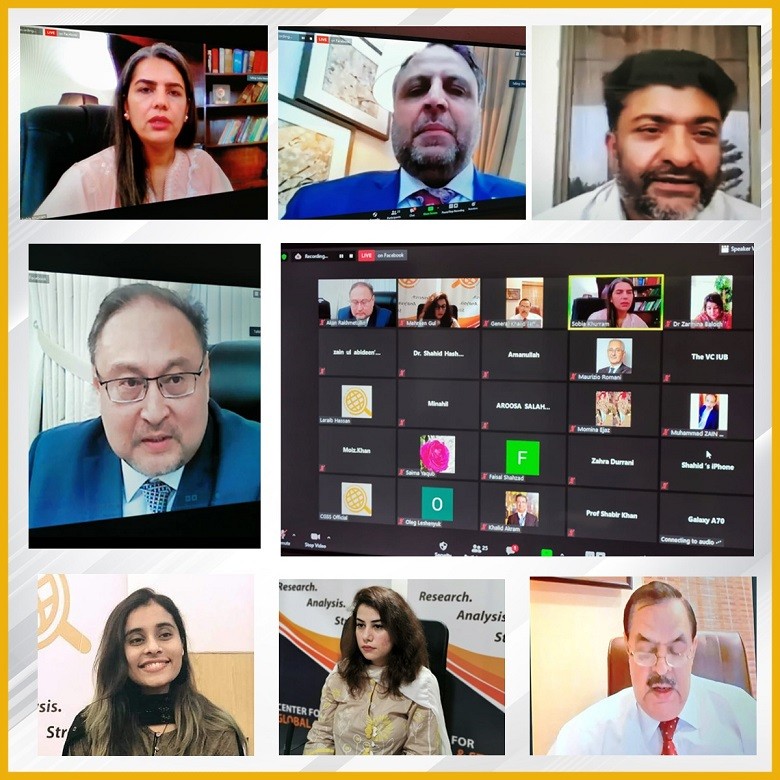 The Ambassador of the Republic of Kazakhstan to Pakistan Akan Rakhmetullin thanked the panel speakers and participants for becoming part of this important event.

Akan Rakhmetullin said that he was proud to be the Ambassador of Kazakhstan to Pakistan as Pakistan was the 4th Country to recognize Kazakhstan after it gained independence from the Soviet Union in 1991.

The ambassador said that Quaid-i-Azam Muhammad Ali Jinnah and Nursultan Nazarbayev shared the same visionary mind directed toward the growth and success of their nations. He said that Mr. Nazarbayev dedicated his life to establish a harmonious society and national unity in Kazakhstan.

The Kazakhstan’s ambassador said that he himself had witnessed the early phases of independence of Kazakhstan and the exemplary role played by Mr. Nazarbayev in restructuring and reforming the Country.

Furthermore, he said that it was under his leadership that Kazakhstan was successfully able to create a safe and secure environment for its people. He said that during his period from 1992 – 2019, the transition from planned economy to market economy took place, which proved to be the best model for the progress of Kazakhstan.

The envoy said that Nursultan Nazarbayev created an environment conducive for economic growth and attracting foreign investment to Kazakhstan as the Country has huge economic and business potential.

The Director External Linkages at the University of Punjab in Lahore Dr. Sobia Khurram praised the hard work and dedication of H.E. Nursultan Nazarbayev for the well-being of Kazakh people.

Dr. Sobia Khurram said that Mr. Nazarbayev was able to achieve national unity and development through his dynamic policies and reforms in his country. She said that today, Kazakhstan has transformed into a modern and advanced country due to the devoted efforts of its national leader.

These attributes made him popular and admired among not only the people of Kazakhstan but the entire world, she said.

The Vice-Chancellor Islamia University of Bahawalpur (IUB) Engineer Professor Dr. Athar Mahboob welcomed all the participants and stressed on the deep bilateral ties between Kazakhstan and Pakistan.

Dr. Athar Mahboob stated that every leader is to be judged in the context in which he operates. Looking at the leadership of Mr. Nazarbayev, he emerged as a strong and inspirational leader for his nation.

The Director Area Study Center at the University of Peshawar Professor Dr. Shabbir Ahmed said that Mr. Nazarbayev has an exemplary role in nation-building and state development of Kazakhstan. He has successfully overcome all hardships by his tremendous leadership and has given a message of peace to the world by giving up on nuclear weapons.

The Webinar was attended by 30 participants from a cross-section of society and was moderated by the Director CGSS Ms. Mehreen Gul.

Mati
Mati-Ullah is the Online Editor For DND. He is the real man to handle the team around the Country and get news from them and provide to you instantly.
Share
Facebook
Twitter
Pinterest
WhatsApp
Previous article
Pakistan protests over Indian firing along LoC targeting civilian population
Next article
Social media expert Hamza Khan gives new ideas to incoming social media workers
Share
Facebook
Twitter
Pinterest
WhatsApp