ISLAMABAD, Pakistan: The Center for Global & Strategic Studies (CGSS) and the Hanns Seidel Foundation Pakistan jointly organized a Conference on “Climate Change as a Non-Traditional Security Challenge: Relevance for Pakistan” in Islamabad.

The aim of the Conference was to establish a strong narrative based on critically analyzed climate change scenarios in the region and particularly in Pakistan. The discussion focused on highlighting the grave implications of climate change on the major pillars of the national security of Pakistan.

Mr. Ashfaq Ahmed Gondal,  Former Federal Secretary of Information and Broadcasting and Vice President (Federal Region), CGSS in his opening remarks stated that the consequences of climate change must be realized. We have no idea about its repercussions if remedial measures are not taken on time. There is an immediate need to enhance the storage capacity of existing water reservoirs. Thereby, constructing new mega-dams along with the large-scale rehabilitation is the dire need of time. The integrated strategies to achieve sustainable climate change targets must be communicated to the local government and community level so that the environmental threat may be catered at the grass-roots level. 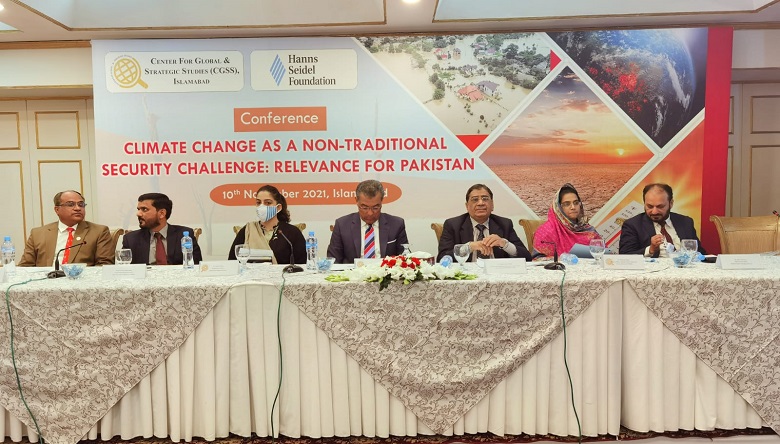 Dr. Steffen Kudella, Resident Representative, Hanns Seidel Foundation Pakistan in his welcome remarks stated that the effects of Climate Change can be seen everywhere in the world. Especially Pakistan is threatened by and vulnerable to Climate Change. Fortunately, Climate Change is solvable. It needs to be slowed down by cutting emissions. Carbon dioxide needs to be actively removed from the atmosphere by planting new trees or restoring old ones. We need to fight misinformation about Climate Change. And in the short-term, we need to prepare and adapt, for instance by planning for water scarcity and building more resilient cities and communities. In short: We need to act now for the future. HSF works in the service of democracy, peace, and development. We understand that without formulating answers to serious non-traditional security risks such as Climate Change, sustainable development, and national and regional stability are very hard to achieve.

Mr. Shakeel Ahmed Ramay, Chief Executive Officer, Asian Institute of Eco-civilization Research and Development, Islamabad gave a presentation on “Non-traditional Security Challenges: Dynamics and Challenges”. He discussed the characteristics of Non-Traditional Security and stated that it does not belong to the state or maybe trans-state in nature. They are equally dangerous or more for people and the state or planet. Mr. Ramay stated that Government should invest on adaptation as it can advert big losses in the future. Pakistan should develop a conceptual framework to identify and monitor potential conflicts related to climate change and resources.

The First Session of the Conference commenced with the speech of Prof. Dr. Muhammad Khan, Professor, Department of Politics & International Relations, International Islamic University, Islamabad who discussed the Implications of Climate change on the pillars of the National Security of Pakistan. He stated that the reality of climate change is that it is happening. There is a need to give compulsory coverage of climate change and its implication in syllabia of all educational institutions. Initiation of a national debate over climate change and its wider is important. Also, there is a need to conceive and develop strategies in short term, medium-term and long term. Formulation of strategies and their implementation to mitigate the threats caused by climate change has to be done sooner than later since Pakistan has already reached an extreme level of vulnerabilities caused by climate change.

Dr. Sarah Amir, Department of Environmental Sciences, International Islamic University, Islamabad presented a speech on Emerging Non-traditional security challenges in South Asia: An Overview. She stated that Non-traditional security threats to South Asia are more inclusive and have far-reaching consequences. They can trigger political competition among states, although they do not stem from it. The availability of renewable water resources in SA is less than 5% of the global total, says the IWMI report. Although the intensity of this issue varies from state to state but overall, every South Asian country is expected to face acute water shortages in the future. South Asian governments have not yet fully realized that military measures and domestic policies alone cannot overcome NTS challenges; rather, many of these challenges must be faced collectively and through regional cooperation.

Dr. Hassan Abbas, Chairman Forte, Integrated Water Resources Management presented a speech on the Role of International organizations in tackling emerging Non-traditional threats: Options to tackle Climate change. He stated that there are three categories of International organizations that includes Intergovernmental, International Non-Governmental Organisations (INGO), and Multinational Corporations. He explained the concept of Ecocide which is defined as “unlawful or wanton acts committed with knowledge that there is a substantial likelihood of severe and widespread or long-term damage to the environment being caused by those acts”.

Mr. Salah ud Din, Deputy Director,  Pakistan Council of Research in Water Resources (PCRWR) presented a speech on Food Challenges in the context of climate variability. He stated that Pakistan is among the 10 most vulnerable to climate change, among 17 countries that has water shortages, and among 36 countries having serious food crisis threat. There have been enormous shortages in the reservoirs during 2021. Tarbela and Mangla reservoirs have a 34% and 51% shortage in storage. overall, about 46% shortages have been observed in the three reservoirs namely Tarbela, Chasma and Mangla. He suggested that we must adopt a scientific approach to be followed to cope with climatic variability.

Chair of Second Session, Mr. Joudat Ayaz, Additional Secretary, Ministry of Climate Change, Government of Pakistan, Islamabad presented a speech on the Impact of Glacial Lake Outburst Flood (GLOF) in Northern Areas of Pakistan, He stated that the maximum number of glaciers outside the polar regions are present in northern Pakistan. The Scaling-up of GLOF risk reduction in Northern Pakistan (GLOF-II) project is a continuation of the four-year ‘Reducing Risks and Vulnerabilities from GLOF in Northern Pakistan’ (GLOF-I) project, which helped vulnerable communities in two districts to prepare for and mitigate GLOF risks through early warning systems, enhanced infrastructure, and community-based disaster risk management. The current project focuses on adaptation, mitigation, and resilience against GLOF events to protect local communities. Glacial lakes are common in Northern Pakistan caused by excessive glacier melting due to climate change. A Glacial Lake Outburst Flood, or GLOF, is a sudden release of water from a lake fed by glacier melt that has formed at the side, in front, within, beneath, or on the surface of a glacier.

Ms. Mufeezah Ahsan, Research Officer, Pakistan Council of Research in Water Resources (PCRWR) presented a speech on the Implications of Climate Change. She stated that Pakistan has experienced a rise in sea level at a rate of about 1.1 mm per year, which is even higher than the global mean. The rise in sea level is most likely to affect the low-lying coastal areas in Southern Sindh and Balochistan. Pakistan faced over 150 extreme weather events during the last couple of decades. Climate change has its adverse impacts on the financial sector. Being a cross-cutting theme, water is at the core of sustainable development for economic growth. The Global Climate Risk Index Report (2020) indicates that Pakistan has suffered an economic loss of about USD 3792.52 million.

Prof. Dr. Irfan Ahmad Baig, Dean Faculty of Social Sciences, MNS University of Agriculture Multan presented a speech on Reducing risks to food security from climate change: An analysis of Pakistan’s agriculture sector. He stated that shift in spatial crop boundaries has enormous economic and social impacts. Almost 690 million people suffered from hunger in 2019, a figure that was projected to rise by 130 million by the end of 2020. In Pakistan, we waste around 36 million tonnes of food annually (weddings, parties, and hotels share about 40 %). If food loss and waste were a country, it would be the third-largest carbon emitter on the globe. Furthermore, he stated that Religious narratives are crucial to tackling climate change.

Mr. Aftab Alam Khan, Chief Executive Officer, Resilient Future International Pvt Ltd presented a speech on Strengthening Economic Security in the midst of Climate Change. He stated that Pakistan experienced 126 heatwaves between 1997 and 2015. The country is expected to witness 2.5 degrees Celsius in temperature rise over the next two decades. Pakistan has a minor share in global GHG emissions. Pakistan’s total greenhouse gas emissions have increased by 123% in 21 years (1994 to 2015) and the total emissions are expected to increase by about 300% for the projected period (2015-2030). Furthermore, she also suggested that there must be awareness-raising for the business sector and also Government Budget allocation for Research and Development.

Dr. Naheed Bano, Assistant Professor, MNS University of Agriculture, Multan presented a speech on Climate Change Challenges on Fisheries and Aquaculture with impact on Food Security (Online). She stated that the reason for global warming is the increase of heat-trapping, greenhouse gases in the atmosphere. Global warming will bring about long-term changes in weather conditions. Climate change is poised to transform marine and freshwater ecosystems. The livelihoods of millions of fishery-dependent people are at risk. She also stated that All of us must work together to protect the oceans, seas, inland waters, and marine resources and ensure sustainable livelihoods, diets, and developments.

The event was attended by approximately 120 participants, and all Sops were followed diligently.