ISLAMABAD, Pakistan: An online meeting was held on Tuesday between the Institute of Strategic and Regional Studies (ISRS) under the President of the Republic of Uzbekistan, Tashkent and the Center for Global and Strategic Studies (CGSS), Islamabad.

During the meeting, the importance of the upcoming International Conference on Central and South Asia Regional Connectivity: Challenges and opportunities was discussed.

The meeting was hosted by the First Deputy Director of the ISRS under the President of the Republic of Uzbekistan Akromjon Nematov. 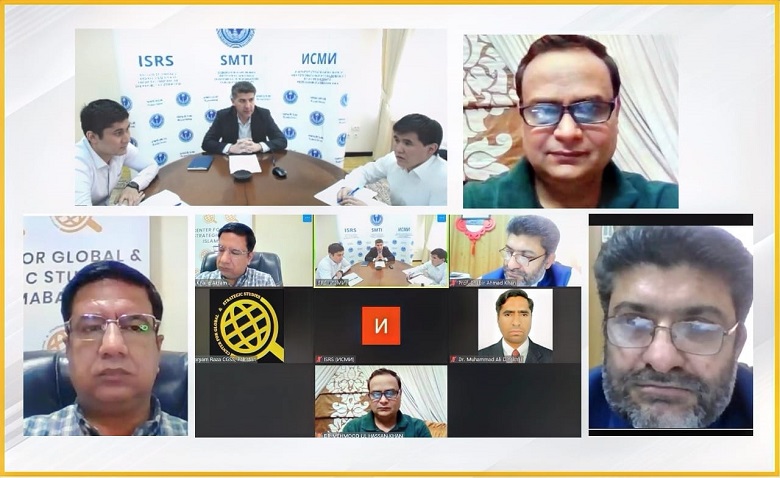 Akromjon Nematov elaborated the significance of the upcoming conference that is to be attended by Uzbekistan’s President Shavkat Mirziyoye, Prime Minister of Pakistan Imran Khan, President of Afghanistan Ashraf Ghani and other important regional leaders.

The First Deputy Director of the ISRS explained that the idea of Central-South Asian connectivity encompasses broader paradigms, i.e., trade and transport connectivity for sustainable growth, revival of cultural and humanitarian ties as a way to strengthen friendship and mutual confidence, analyzing regional security challenges, ensuring the security of cross-border infrastructure and devising strong policies to tackle common global threats.

The Regional Geopolitical Analyst & Member Board of Experts at the (CGSS Dr. Mehmood Ul Hassan Khan appreciated the effort of ISRS for organizing the meeting. He said that socio-economic integration, academic collaboration and broader prospects of regional integration hold immense importance in today’s changing dynamics of the world.

Dr. Mehmood Ul Hassan Khan elaborated the role of CGSS as a major stakeholder in bridging the gap between Central and South Asia via policy-making, researches, building trust and facilitating joint academic projects.

Dr. Mehmood said that there are transregional cooperative programs such as BRI, CPEC, CAREC, ECO, and Pakistan is ready to complete them. He said that CGSS look forward to add constructively into regional connectivity and facilitate more webinar, seminars and conferences in this domain.

The Director Area Study Centre (Russia, China & Central Asia) at the University of Peshawar and Member Board of Experts at the CGS Professor Dr. Shabir Ahmed said that 21ST century is the century of Eurasian integration. He highlighted the importance of regional connectivity and cooperation of the Central Asia with South Asia. He said that BRI, CPEC and other integration programs are there to enhance regional cooperation.

However, regional states need to help themselves. He elaborated that there is a need to enhance regional connectivity in all spheres including political, economic and security.

Dr. Shabir also highlighted the importance of the rail routes and the existing economic integration projects like ECO, BRI, CAREC etc. He stated that development of cross-border connectivity and physical infrastructure is a dire need of time. He proposed that addition of Central Asian Republics into CPEC would be beneficial. There are huge prospects for the investment. He concluded that the cooperation must dominate the competition in the region. The cultural and people-to-people contacts must be increased.

The Executive Director at the CGSS Khalid Taimur Akram appreciated and welcomed the initiative of regional connectivity by His Excellency Shavkat Mirziyoye.

Khalid Taimur Akram suggested certain meaningful options to be discussed in the upcoming online conference on Central and South Asia regional connectivity: Challenges and opportunities. First, there should be a banking system in the regional states that have smooth and easy transection policies for Pakistan. Second, the academic collaboration should be enhanced and an integrated system to recognize the degrees should be formulated and discussed. Third, there should be easy custom-trade regimes and free trade agreements that should be signed between Central Asian Republics and Pakistan. Fourth, there must be easy visa regime to enhance tourism and people-to-people connectivity. Fifth, Central Asia and South Asia must devise such policies to formulate a joint narcotics plan as Afghanistan is facing dreadful situation due to the Narco-trafficking. Six, there should be a coherent regional plan to counter the transnational cybercrimes. Seventh, people should know the origin and legacy of Central Asia as it initiated from Amir Taimoor. There is a dire need to understand the actual roots and legacy. While concluding,

Mr. Taimur highlighted the importance of the initiative of the president of Uzbekistan as a new regional policy for open borders, regional cooperation and sustainable development.

While giving the concluding remarks, the First Deputy Director of the ISRS under the President of the Republic of Uzbekistan Akromjon Nematov appreciated the suggestions given by Dr. Shabir Ahmed, Mr. Khalid Taimur, and Dr. Mehmood to be discussed in the upcoming international conference to promote regional connectivity. He expressed his gratitude to CGSS for the value time and input.