ISLAMABAD, Pakistan: The Online International Conference on “Azerbaijan-Armenia Armed Conflict: Causes and Implications for the Regional Dynamics of South Caucasus” was jointly organized by the Islamabad-based Center of Global and Strategic Studies (CGSS) and Baku’s ADA University.

The aim of the Conference was to analyze the implications on the security and stability of the Caucasus region, the successful foreign policy of Azerbaijan and the Nagorno-Karabakh region, and other significant aspects of the Armenia-Azerbaijan conflict.

The Conference was commenced with the opening remarks of the Senior Member Advisory Board CGSS Brigadier (retd) Akhtar Nawaz Janjua. 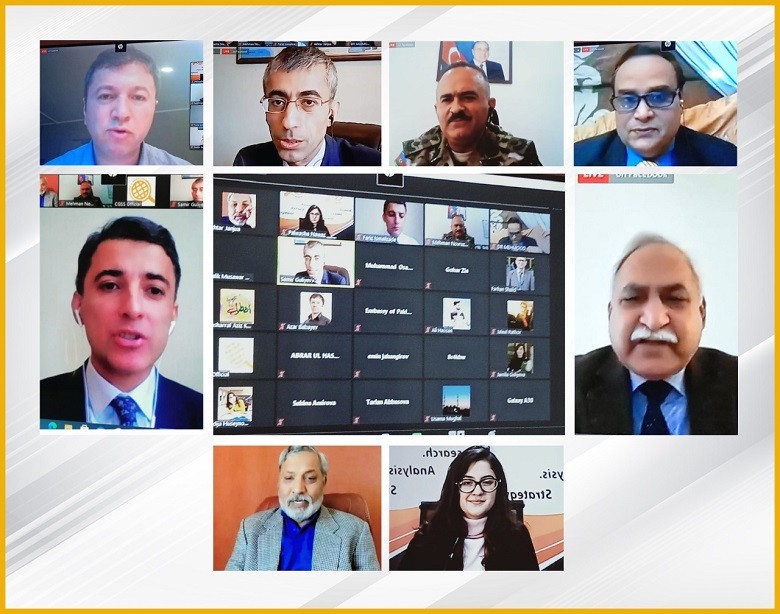 Brigadier (retd) Akhtar Nawaz Janjua said that there are many important lessons that we can learn from this war, where there is a will there is a way and our brothers in Azerbaijan have shown commendable strength and courage in the Armenia-Azerbaijan conflict. The truth has prevailed and Azerbaijan stands victorious.

The Executive Vice-Rector of ADA University Fariz Ismailzade said that since the disintegration of the Soviet Union, things took an uncertain turn. He mentioned that Azerbaijan was supported by many countries in the international community.

Fariz Ismailzade further mentioned that when the Soviet Union was weakening, Armenians started to occupy this land. On March 2, 1992, when Azerbaijan was accepted in the UN, Nagorno-Karabakh was accepted as a part of Azerbaijan and the international community accepted it without any objection. Armenia, in the meanwhile, occupied the Nagorno-Karabakh region which created a refugee crisis.

The Executive Vice-Rector further discussed that there were areas very difficult to liberate but the professional behavior shown by the Azerbaijan army played an important role. Azerbaijan’s army successfully liberated important areas.

The Senior Member Advisory Board CGSS Major General (retd) Dr. Shahid Ahmad Hashmat mentioned that the conflict is almost 100 years old. The UN resolutions after this demanded de-escalation and return of refugees and return of land to Azerbaijan, but none of this happened. Minsk group was formed and diplomatic efforts were done but to no avail.

Dr. Shahid Ahmad Hashmat further explained that on 27th September 2020, both countries alleged each other for escalation. War continued and Azerbaijan reoccupied areas up to Shusha and would have occupied the capital in the coming days had there been no ceasefire agreement.

Major General (retd) Dr. Shahid Ahmad Hashmat further highlighted that Azerbaijan has strived towards a long-lasting solution for peace in the region. But the problem remains and it will be most suitable if it is solved in the next 10 years.

The Defence Attache of the Embassy of Azerbaijan to Pakistan Colonel Mehman Novruzov mentioned that according to Armenia, Azerbaijan will not be able to breach their defense lines which were heavily fortified with minefields. The new Armenian government tried to apply a hard-line military narrative for occupying new territories at the expense of Azerbaijan. In pursuance of this motive, Armenian military aggression against Azerbaijani civilians continued.

Hence, the counteroffensive peace operation by Azerbaijani political leadership was given a go-ahead. He discussed the warfare strategies, operational and tactical preparedness of Azerbaijan and shared a comprehensive presentation describing the timeline of the conflict.

Colonel Mehman Novruzov shared informative videos of the armed conflict and stated that about 400 Azerbaijan personnel fought successfully against 4000 heavily armed Armenian forces equipped with heavy artillery and tanks. Discussing the battle of Shusha he stated that this will be remembered in modern warfare history.

The Deputy Head of the Mission of Azerbaijan’s Embassy Samir Guliyev said that Azerbaijan’s main aim was to establish peace and cooperative relations with its neighboring as well as other neighboring countries for a win-win situation.

Coming to this conflict, Samir Guliyev mentioned that Azerbaijani was always supported by provisions and directions of international law which were constantly ignored by Armenia. Many countries accepted Azerbaijan’s point of view with due course of time because of its basis on international conflict.

Samir Guliyev further stated that Pakistan’s and Turkey’s cooperation is an example of the international support received by Azerbaijan. He also highlighted the cooperation of the Organization of Islamic Cooperation.

Professor Dr. Azar Babayev also emphasized that Azerbaijan is the clear winner of this armed conflict. It was not only a war of military but also a war of political and academic level that Azerbaijan has won.

The Member Board of Experts CGSS & Regional Geopolitical Analyst Dr. Mehmood Ul Hassan Khan said that dreams have come true and the liberation of Nagorno-Karabakh has become a reality. Armenia was forced to sign a peace treaty with Russia and Azerbaijan for solving this issue. An illegal occupier, Armenia, has disturbed the geography of this region for a long time. On September 27, 2020, Azerbaijan responded after persistent Armenian shelling on Azerbaijani territory and presented an outstanding example of courage and bravery.

Dr. Mehmood Ul Hassan also highlighted that fascist Armenia indiscriminately attacked the infrastructure and civilian population of Azerbaijan On the other Azerbaijan did not kill a single Armenian civilian, school, or hospital and answered the enemy on the battlefield. Describing the impressive leadership qualities, he stated that President Ilham Aliyev increased Azerbaijan’s ties with Turkey and increased its strategic relations with Pakistan that diplomatically helped Azerbaijan against Armenia.

The Conference was concluded with the closing remarks of Fariz Ismailzade who expressed his gratitude to panelists from Azerbaijan and Pakistan and specifically thanked CGSS for their support to Azerbaijan and raising awareness regarding the Azerbaijan-Armenia armed conflict.

The Conference was moderated by the Project Executive of CGSS Ms. Palwasha Nawaz, and was attended by 100 participants from Pakistan and Azerbaijan.

Mati
Mati-Ullah is the Online Editor For DND. He is the real man to handle the team around the Country and get news from them and provide to you instantly.
Share
Facebook
Twitter
Pinterest
WhatsApp
Previous articlePakistan rules out recognizing Israel till just settlement of Palestine issue
Next articleTeleservices ‘Umang Telehealth’ to be developed for drug addicts