RAWALPINDI, Pakistan: The Centre for Social Justice (CSJ), a Lahore-based civil society organization, has initiated a training program in Rawalpindi on January 19, 2020 about the minority leadership development with the political members of religious minorities from different political parties.

The training program – being organized in collaboration with Rawalpindi Law College – is based on a series of seven lectures on different topics.

The first topic was about Effective Leadership, the second one is going to be on Effective Participation of Local Government And Minorities, the third on Protecting Minorities and Women’s Rights, the forth on Social and Economic Status of Minorities (Employment Quota) and Positive Measures, the fifth on Human Rights Organizations, the sixth on Commission for Minority Rights Why and When, and the last lecture is going to be on Teaching, Training and Religious Harmony. 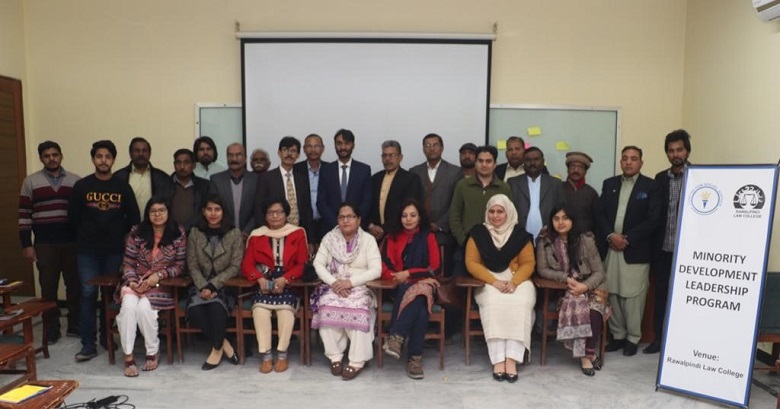 The entire lecture series is being organized at Rawalpindi Law College.

The first lecture was conducted by the Guest Speaker Arshad Warsi (M.Phil in Governance and Public Policy). He has expertise in human rights, political intolerance, leadership and team building.

According to the CSJ, the lecture series shall seek:

The religious minorities, who are counted 3.72 percent of the total population, are perpetually vulnerable to legal, socio-economic and political discrimination and exclusion. Moreover, women face difficulties escalating themselves in the leadership role in any area of work. The discriminatory laws or customs against women and religious minorities make the role of women in the leadership more challenging because of their further low socio-economic and political status.

Therefore, the CSJ under the leadership of Mr. Peter Jacob works with the aim of enhancing the scope of social and political inclusion of religious minorities.

Mati
Mati-Ullah is the Online Editor For DND. He is the real man to handle the team around the Country and get news from them and provide to you instantly.
Share
Facebook
Twitter
Pinterest
WhatsApp
Previous articleWhen Adventure went wrong: 22 Students of LUMS rescued by Pak Army from snow hit Rattu
Next articleHuawei to Launch mobile wallet in collaboration with Union pay and NBP