DUSHANBE, Tajikistan: The Minister of Foreign Affairs of the Republic of Uzbekistan Vladimir Norov took part in the High-level International Conference on “International and Regional Border Security and Management Cooperation to Counter Terrorism and Prevent the Movement of Terrorists” which was held on October 18, 2022 in Dushanbe. 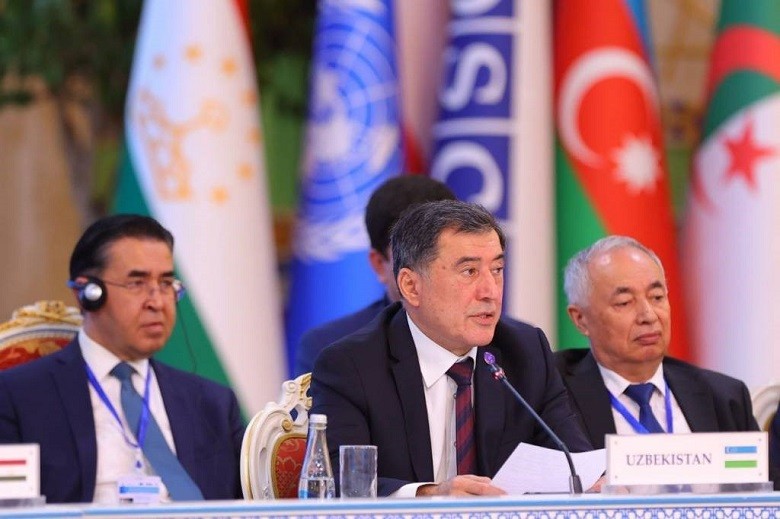 In his speech at the Conference, the Uzbek foreign minister noted the successes achieved in Central Asia in recent years in strengthening regional consensus on common principles and approaches in the field of combating against terrorism, creating effective mechanisms for bilateral and multilateral cooperation in this area, expanding the exchange of experience and information.

The Central Asia has shown the first successful example of the regionalization of the UN Global Counter-Terrorism Strategy by adopting a Joint Action Plan for its implementation. The National counter-terrorism systems have been formed and Country Action Strategies have been developed that fully comply with UN recommendations.

“A solid foundation for joint actions to combat common challenges and threats in the region is the close relations between the Central Asian countries based on the principles of friendship, good neighborliness, mutual respect and trust. The Consultative Meetings of the Heads of Central Asian states contribute to the realization of the enormous potential of our countries in ensuring regional security and sustainable development,” said Uzbek Foreign Minister.

At the Consultative Meeting held on July 21, 2022, a historic Treaty of Friendship, Good Neighborliness and Cooperation for the Development of Central Asia in the 21st century was signed.

The international recognition of the deepening partnership between the Central Asian countries was the adoption by the UN General Assembly of resolutions on “Strengthening regional and international cooperation to ensure peace, stability and sustainable development in the Central Asian region”, “Strengthening connectivity between Central and South Asia”, “Central Asia – a zone of peace, trust and cooperation” initiated by Uzbekistan and other countries of the region.

The Uzbek Foreign Minister Vladimir Norov also focused on the situation in Afghanistan, which is closely linked to the prospects for the development of Central Asia. He acquainted the conference participants with the initiatives of the President of the Republic of Uzbekistan Shavkat Mirziyoyev on the Afghan issue.

In particular, he focused on the proposal of the President of Uzbekistan on the formation of a high-level international negotiating group to prepare and coordinate with the Afghan authorities an algorithm for the step-by-step implementation of the obligations of the parties, which was announced at the recent CICA summit in Astana. It was noted that this mechanism could become an effective and efficient platform for defining clear mechanisms, deadlines and conditions for the fulfillment of obligations by the Interim Government of Afghanistan and the international community.

The International Conference on Afghanistan held in Tashkent in July with the participation of the delegation of the Interim Government showed the interest of the world community in developing coordinated approaches towards this country.

The Uzbek foreign minister stressed the importance of preventing the isolation of Afghanistan and called the international community to take effective measures to restore its economy, integrate the country into interregional economic processes, implement infrastructural and socially oriented projects, with the support of the UN, international financial institutions and donors.

For its part, Uzbekistan makes a feasible contribution to international efforts to assist the neighboring Afghanistan. An international multifunctional transport and logistics hub has been created in Termez, which is actively used by UN structures to provide humanitarian assistance to Afghanistan.

The importance of implementation of the Uzbek President’s initiative, put forward at the SCO Summit in Samarkand, on the establishment in Termez of a Special Fund for humanitarian support of Afghanistan. means of this Fund will be directed to overcoming the social crisis, the implementation of educational programs for young people and projects in the field of healthcare.

According to Vladimir Norov, the implementation of trans–regional infrastructure projects, including the construction of the Termez – Mazar-i-Sharif – Kabul – Peshawar railway, as well as the establishment by Uzbekistan, with the support of the United Nations, of an Interregional Center for Connectivity in Tashkent, will contribute to the involvement of Afghanistan in regional trade and economic relations.

Further, the head of the Uzbek delegation drew the attention of the participants to the initiatives of the President of Uzbekistan to unite the efforts of the world community to fight against global and regional security threats.

In particular, the Conference participants were informed about the proposal of the President of Uzbekistan regarding the creation of a unified electronic network on cyberterrorism in Central Asia, designed to promote the exchange of experience and data, research and best practices in this area.

In this regard, the importance of implementing the initiative of the President of Uzbekistan to open an office of the UN Counter-Terrorism Directorate in Central Asia with ensuring its close cooperation with leading relevant international and regional organizations was emphasized.

Today, the Internet is becoming a tool for spreading radical ideology, recruiting people, providing financial support, planning and committing terrorist activities. In this context, the proposal to build the capacity of Central Asian countries in the field of effective countering the use of digital technologies for terrorist purposes is important.

The Uzbek foreign minister presented the information about the work carried out by Uzbekistan on the return of its citizens from conflict zones, their rehabilitation and reintegration into society.

It was reported that the Uzbek side is ready to exchange experience with other UN Member States in this direction. In this context, attention is focused on the initiative of the Uzbek Leader to establish, under the auspices of the UN Counter-Terrorism Office, a regional Expert Council with participation of the leading experts of Central Asian countries, whose main tasks will be to improve rehabilitation and reintegration programs for citizens, develop proposals to combat the propaganda of terrorism.

The most important condition for successful counteraction to terrorism and extremism is an effective youth policy.

The launch of the Dialogue of Generations proposed by the Uzbek President will serve for a better understanding between people of different ages, a joint search for solutions to urgent problems of youth.

Vladimir Norov informed about Uzbekistan’s readiness to hold the first meeting of this Dialogue within the framework of the Youth Leaders Forum in Samarkand in April 2023.

The audience’s attention was drawn to the idea of the President of Uzbekistan to hold a high-level International Conference “Education and Religious Tolerance” in 2023 in order to identify promising areas of cooperation in promoting the ideas laid down in the UN Special Resolution of the same name, adopted on the initiative of Uzbekistan.

This event also fits seamlessly into the UN Global Counter-Terrorism Strategy, in which the promotion of ideas and principles of tolerance, mutual respect, interreligious and intercultural dialogue with the participation of all segments of society occupies a key place.