The well-renowned app-based ride-hailing service Careem has once again been blanketed under a controversy, involving one of its female customers surviving a kidnapping attempt by a Careem Captain (Careem Captain attempts to kidnap a Female Rider).

The incident took place on September 24, following which, the female – whose name is withheld for privacy reasons –  also generated an email to Careem, saying her “safety and security was compromised”; therefore a strict action must be initiated against the accused Captain.

The content of her email to Careem is as follows;

“I face an attempt of kidnapping today with your Careem Captain (name withheld) booking reference (withheld). The driver attempted to de-route immediately post pick up; when I tried to guide him. He started behaving and started trowing tissue box and rags from front of the car. I pulled out a hand break as soon as the car stooped I got out that is when he kept on cursing for money as he wanted me back near the car door; but he couldn’t place me back near the car as I kicked the car door shut and stood away from the car so I couldn’t be pulled back. I came out and stood on sideways where I was visible to people and kept calm. The driver started claiming that I was under influence and started kicking my bag and people started gathering; I stayed calm because under the situation anyone could have believed him that I was under influence. I was rescued by a passerby. I threw hundred rupees at him as he was making a scene. This is either a psychotic man or a rapist who definitely had bad intentions of kidnapping and God knows what else. Kindly take immediate notice of this ride was booked through email ID (withheld).

I am a well-respected customer of Careem, however, today my safety and security were compromised.”

Following her email, the Careem management responded to her, prompting her to utter words of thanks.

“I reported the case to Careem and now I have a letter saying that he is no longer working with them. Seems like the safety of women is important when it hits social media. My family is in process of Filing an FIR. All of the women out there please be careful; spread this post as much as you can in Karachi. This post is not to gain sympathy but to create awareness please spread it as much as you can #Careem # Nazlee Nizami” 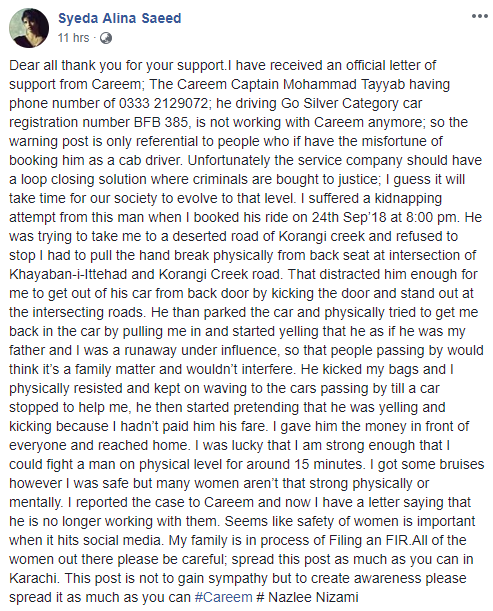 Mati
Mati-Ullah is the Online Editor For DND. He is the real man to handle the team around the Country and get news from them and provide to you instantly.
Share
Facebook
Twitter
Pinterest
WhatsApp
Previous articleCICA Chairmanship transferred from China to Tajikistan
Next articleBISP, ARC sign MoU for enrollment of 208,445 children in schools