TORONTO, Canada: The Consul General of Pakistan in Toronto Imran Siddiqui visited the Sikh Spiritual Center to attend celebrations for the opening of Darbar Sahib Kartarpur.

His visit took place at the invitation of the Ontario Gurudwara Committee, Ontario Sikh Council, and the representatives of Sharoomni Akal Takht Amritsar.

The event was opened after Keertan.

The Spokesman of the Gurudwara Committee Bhai ji Amarjeet Singh made the opening remarks in which he thanked Prime Minister of Pakistan Imran Khan for taking the initiative of opening Kartarpur Crossing which was “like a dream of the Sikhs worldwide for the last seven decades”.

Bhai ji also praised the Chief of Army Staff (COAS) General Qamar Javed Bajwa for his support of the initiative. 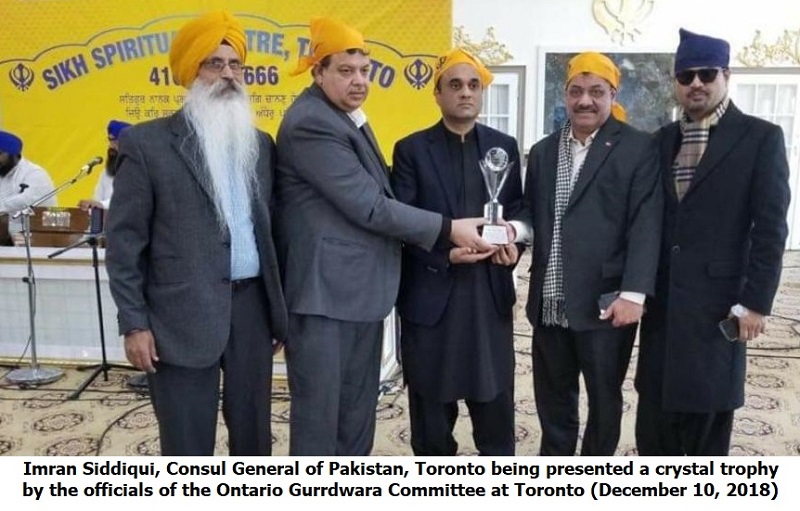 Other speakers appreciated the efforts of the government of Pakistan for taking good care of Sikh shrines in Pakistan.

In his remarks, the Consul General said that the opening of Darbar Sahib Kartarpur is a clear statement of peace by Pakistan. He said that challenges notwithstanding, Pakistan will continue to lead this mission of peace.

Imran Siddiqui urged the Canadian Sikhs to raise awareness about this heritage among all Canadians particularly the younger generation Sikhs enabling them to visit Pakistan for religious as well as cultural purposes.

At the end of the event, Bhai ji Amarjeet presented crystal trophies for the Prime Minister Imran Khan and the COAS, and requested the Consul General to pass them on to destination.

Mati
Mati-Ullah is the Online Editor For DND. He is the real man to handle the team around the Country and get news from them and provide to you instantly.
Share
Facebook
Twitter
Pinterest
WhatsApp
Previous articleInfinix takes the concept of company-customer relations to a new height with Infinix City Club
Next articleAzerbaijan’s space program brings profit, opens new int’l co-op horizons