LAHORE, Pakistan: Tecno, the global premier mobile phone brand with presence in over 40 countries, has impressively lived up its reputation in the last few years as being the market leader in launching camera and selfie centric smartphones.

While its other products have taken mobile market with a storm, its Camon series has transformed itself into a more vibrant high end generation of mobile with resolute of reaching at the top of market.

Tecno, in the past has successfully launched several not-just-smartphones which include, but are not limited to Camon I, Camon I Air, Camon CX, Camon CX Air. While these products have earned their own places, Tecno has unequivocally adapted to the varied needs of its customers. It not only means incorporation of this experience in its products but a more varied consumer experience. Tecno being a newer brand is certainly facing challenges in the market but it has not given up into this race and has come up with very unique products to engage the ever expanding mobile market.

Most recently, in the continuation of its Camon Series, Tecno launched a high-end smartphone – Camon X Pro – with slogan of “Clearly Better” – it has seen the daylight as a more lucrative device for professional use. With a 24M clear selfie, 6 inch infinity screen with ratio of 18:9 and a face recognition feature, it has all what it takes to be a hot favorite smartphone. 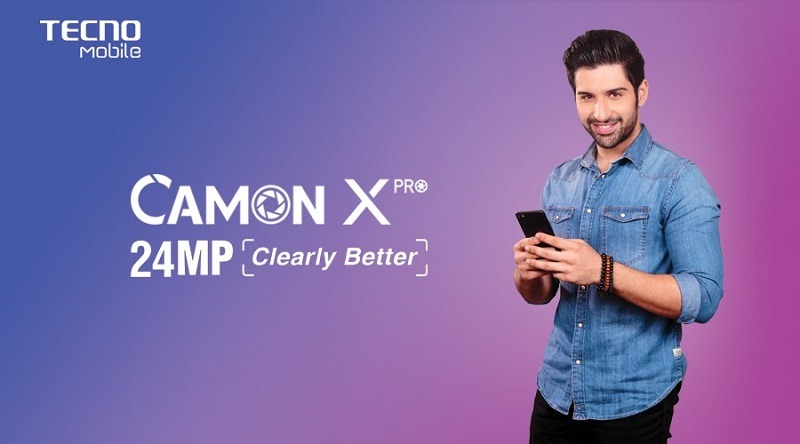 Camon X Pro debuts a 24MP + 16MP front and rear camera to being with. Not only the image definition of both cameras has been enhanced to 30% but moreover these cameras are supported by dual adjustable LED flash system that provides abundant light according to the environment needs. Its front camera is basically a high pixel camera which ensures clear selfies and adds a unique crisp to the clicks. The Camon X Pro comes with a latest generation of dual ISP image processor which enhances the processing effect of the device. A new generation of processor with memory color function ensures the natural color reduction. With these the device comes with a loaded variety of picture enhancement tools to boost the pictures. Bokeh effect, Super AF, Portrait HDR and recognition of 108 facial features are some of the main features.

To feature more with invariable volume Camon X Pro’s full view display screen has been re-designed to a bigger 6 inches. The statistics of the screen speak for themselves according to which now 10% more could be viewed on this screen. Not only the screen has been extended but so have been the other features. The screen brightness has been increased to 500nits.

Camon X Pro comes with value added and exciting protection and security features for ensuring the protection of the owner; The first being Face ID technology that that can be used to unlock the phone when lighting up the screen and the other an Album Lock that is HIOS protected that gives users a double protection insurance. Using the face information Face ID brings into working the speedy 50ms recognition rate, making it more functional than the fingerprint identification feature.

Camon X Pro comes powered by a 2.0 GHz Octa Core with a promoted fluency of up to 20% unlike its previous device versions which were powered with a 1.5 GHz Octa Core processor. This processor has been powered by HIOS 3.3 and Android 8.0. A dedicated hardware for image signal processing gives CAMON X Pro longer battery life with fantastic photo and video capture experience. The processor gets it primary processing boosting from a gigantic 4 GB Ram that hasn’t been compromised on and serves as a very striking value added feature.

Camon X Pro offers a mega 64 GB of space which could squeeze tons of videos and data without having to worry about notifications of space shortage.

Camon X Pro has one of the largest batteries in the market. The power beast of Camon X Pro has been upgraded from 3200 mAh to 3750 mAh which comes with a fast-charging function. With 10 minutes of charging users can take more than 1000 pictures.

How does it feel to just hold a screen in the hand? The premimum class CAMON X Pro’s screen gives the users a convenience of more screen to do more stuff while its visual comfortability marks for its users a pleasant experience that other compatitors fail to offer. The body of Camon X Pro follows an ulta-thin-flat design with 5.2mm visual thickness. This ultra slim body fits right into the hands of consumers.

Camon X Pro truly justifies its specifications and with its overall performance. No doubt Tecno is a newer brand in the Pakistani market, but it has for sure introduced devices and specifications that have proved to be a tough competition to the traditional market. Camon X Pro is available Midnight Black, Champagne Gold, City Blue.

Mati
Mati-Ullah is the Online Editor For DND. He is the real man to handle the team around the Country and get news from them and provide to you instantly.
Share
Facebook
Twitter
Pinterest
WhatsApp
Previous articleTotal number of registered voters for General Elections 2018 of Pakistan is 105.95 million
Next articleFINCA chooses AutoSoft’s Core Banking Platform