LAHORE, Pakistan: Bunyad Foundation, a non-governmental organization (NGO) working for the promotion of education, mental health awareness and women rights in Pakistan, has decided to provide rations bags to the daily-wagers and their families.

On March 23, they began distributing food supplies to the underprivileged to Lahore and the neighboring cities & villages of Lahore. The Bunyad team put together ration packages with basic food and hygiene supplies and were distributed to the families of the daily-wage workers.

The esteemed NGO that has made 2.5 million people literate via non-formal education, adult education, continuing education, CLC, formal education and mobile phone literacy in 14 districts of Punjab. Due to the immense amount of education made available to the underprivileged, Bunyad Foundation has earned themselves multiple awards by UNESCO  (Paris), such as Communications Medal and the King Serong Prize and the Presidential Award of Aziz-e-Fazilat for literacy promotion.  This time around, the NGO aims to help the suffering community during this pandemic with Nishay Shafi’s proactive initiative. 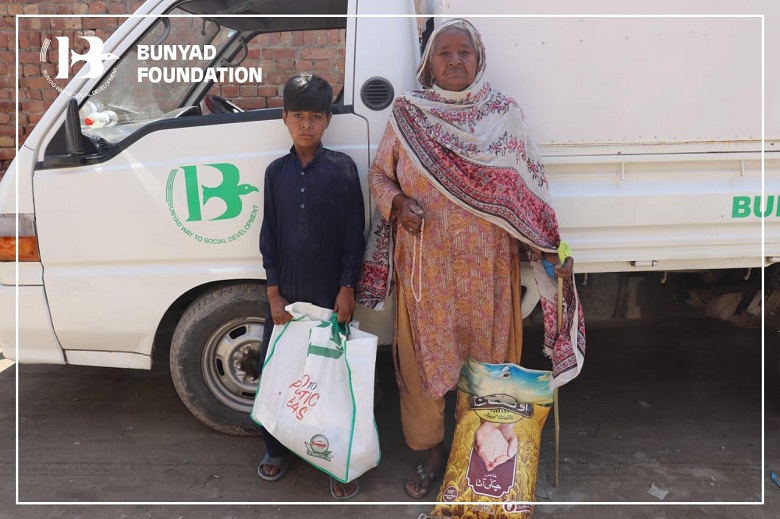 While the country is combating COVID-19, Bunyad Foundation managed to get Rs. 4 million in donations as well as enormous amounts of food supplies in just one week.  The core team members of the NGO decided to donate ration bags with Dettol soaps, rice, flour, sugar, oil, packaged milk, and daal, helping the lower-income families keep food on the table during this pandemic rather than handing cash to them. Phase 1 consisted of Bunyad intending to help daily breadwinners with the basic items during the pandemic situation across different cities of Pakistan.

Starting from Lahore, Bunyad expanded their reach by distributing monthly ration bags in Multan, Sialkot, Hafizabad, and Rahim Yar Khan to the deserving families in the time of crises and economic fallout. Extended their helping hands, Bunyad Foundation has managed to provide food and basic items to the 1000+ families in the first phase and hoping to further extending this activity in coming days. Bunyad Foundation also distributed rations to the transgender community.

Speaking on the occasion, Shaheen Attiq-Ur-Rahman, the founder of Bunyad Foundation said, “We have to stand together in this crucial time, to protect & give hope to those who are without any livelihood. We are making efforts, come join us for the sake of humanity.”

Phase 2 consists of distributing rations to Lahore, Multan, Hafizabad, Sialkot, Rahim Yar Khan, Khushab, Gujranwala and Sargodha. Bunyad Foundation is grateful to all the corporations and individuals that have donated so far and that are continuing to donate.

Bunyad is an institute that has been transforming the lives of students, intellectually, socially, and ﬁnancially to make them better citizens of the world by teaching them how to survive in a competitive world. Empowering the underprivileged community across different villages in Pakistan by providing formal and non-formal education, vocational training, and mobile-phone literacy programs.

Mati
Mati-Ullah is the Online Editor For DND. He is the real man to handle the team around the Country and get news from them and provide to you instantly.
Share
Facebook
Twitter
Pinterest
WhatsApp
Previous article
Nobody will ask your money trail if you invest in Construction Sector, says PM Imran Khan
Next article
PTCL signs MoU with Gulberg Greens for provision of state-of-the-art services
Share
Facebook
Twitter
Pinterest
WhatsApp