ISLAMABAD, Pakistan: The British Royal Couple Duke and Duchess of Cambridge Prince Willian and Kate Middleton have reached Islamabad at the request of the UK’s Foreign and Commonwealth Office. 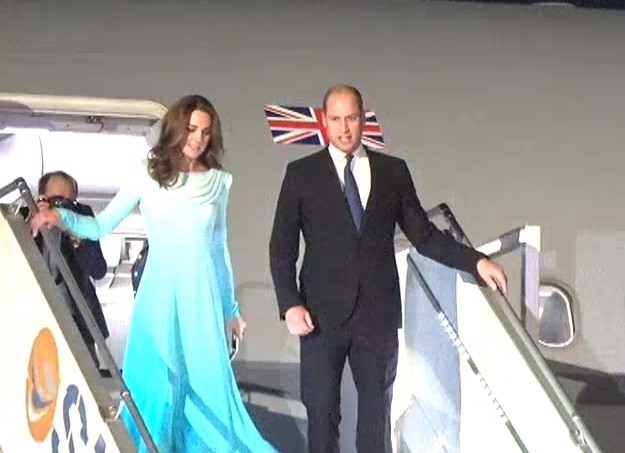 Their plane landed at Nur Khan Airbase in Rawalpindi on Monday night, wherein the Foreign Minister Shah Mahmood Qureshi along with the Foreign Office Officials and the British High Commissioner in Pakistan Thomas Drew received them.

Children presented bouquets of flowers to the British Royal Couple at the airport.

Their first official visit to Pakistan will last for five days from October 14-18. Prior to them, Prince of Wales Charles and the Duchess of Cornwall Camilla also travelled to Pakistan in 2006.

The visit by the Royal Highnesses will “largely focus on showcasing Pakistan as it is today – a dynamic, aspirational and forward-looking nation,” read a statement by the Royal Couple’s Spokesperson on October 4.

“From the modern leafy capital Islamabad, to the vibrant city of Lahore, the mountainous countryside in the North, and the rugged border regions to the West, the visit will span over 1000km, and will take in Pakistan’s rich culture, its diverse communities, and its beautiful landscapes.

Throughout the tour, Their Royal Highnesses will visit programmes which empower young people, and organisations that help ensure they have the best possible start in life. Access to quality education, particularly to girls and young women is one of the UK’s top priorities in Pakistan. The Duke and Duchess are looking forward to spending time meeting young Pakistanis, and hearing more about their aspirations for the future.

Their Royal Highnesses will also spend time understanding the complex security picture in Pakistan. They will learn more about the challenges and opportunities, both of the past and today. The UK has been a key partner for Pakistan, and The Duke and Duchess will meet UK and Pakistan military personnel who are sharing expertise to improve security.”

We’re in the final countdown to the arrival in Pakistan of the Duke and Duchess of Cambridge. Here is a flavour of what to expect. #RoyalVisitPakistan pic.twitter.com/zvg0MkTkNa

In his video message shared on Twitter, the British High Commissioner in Pakistan Thomas Drew said that during their five-day visit, the Royal Couple would visit the ‘breadth and depth’ of Pakistan.

The High Commissioner said that most importantly the Royal couple hope to meet as many Pakistanis as possible during the visit particularly the youth who are shaping future of the Country.

Thomas Drew said that the duo is looking forward to building a lasting friendship with the people of Pakistan.

Mati
Mati-Ullah is the Online Editor For DND. He is the real man to handle the team around the Country and get news from them and provide to you instantly.
Share
Facebook
Twitter
Pinterest
WhatsApp
Previous articleKashmir Seminar being held in Oslo Norway
Next articlePutin in Saudi Arabia: Putin signed 20 deals of cooperation in Riyadh