ISLAMABAD, Pakistan: The Chairperson All Party Parliamentary Kashmir Group (APPKG) in the UK Parliament Debbie Abrahams has slammed the Indian government for not allowing the UK parliamentary group to visit the Occupied Jammu and Kashmir.

While addressing media briefing along with the Foreign Minister Shah Mahmood Qureshi in Islamabad on Wednesday, Debbie Abrahams said that the purpose of group’s planned visit to Azad Jammu and Kashmir and the Indian Occupied Kashmir was to review human rights situation there.

However, she added that Islamabad extended all-out cooperation to the UK parliamentary group for visiting Azad Kashmir but New Delhi did not allow the APPKG to visit the Occupied Valley, said a report by Radio Pakistan.

Debbie Abrahams further said the Head of UN Human Rights Commission will soon visit Pakistan and India to collect documentary evidence about the prevailing situation in Kashmir. She expressed hope that India will cooperate with the Commission just like the Pakistani government. 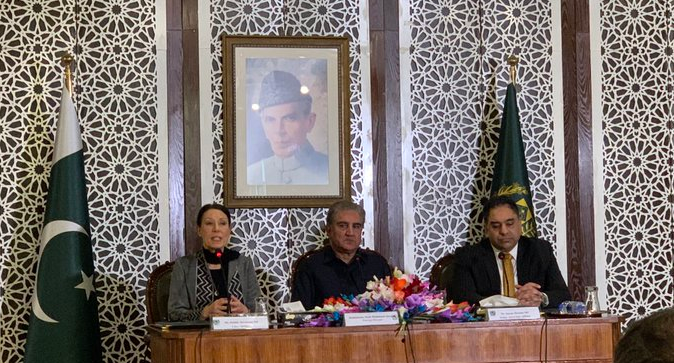 In his remarks, Shah Mahmood Qureshi regretted that the situation in the Indian Occupied Kashmir is getting deteriorated following Indian illegal and unilateral actions of August 5, 2019.

The minister also urged Parliaments of various Countries including the UK House of Commons, to pass unanimous resolutions on Kashmir just like Pakistan.

The Senior Vice-Chair All Party Parliamentary Group on Kashmir MP Imran Hussain said that the Kashmiri people are facing communication blackout in the held valley and they are unable to get access to the essential commodities including medicines owing to continuous curfew. He said that we are here to explore the human rights situation on both sides of the Line of Control (LoC).

Earlier in the day, the APPKG members met the Foreign Minister Shah Mahmood Qureshi in Islamabad.

The foreign minister thanked the group for paying a visit to Pakistan and Azad Kashmir. He said that the visit reaffirms the resolve of the group for resolution of the Kashmir issue.

Mati
Mati-Ullah is the Online Editor For DND. He is the real man to handle the team around the Country and get news from them and provide to you instantly.
Share
Facebook
Twitter
Pinterest
WhatsApp
Previous articlePakistan-Bangladesh bilateral ties to further grow in future: President Abdul Hamid
Next articleQAU Alumni Association demands Special Package for Quaid-i-Azam University