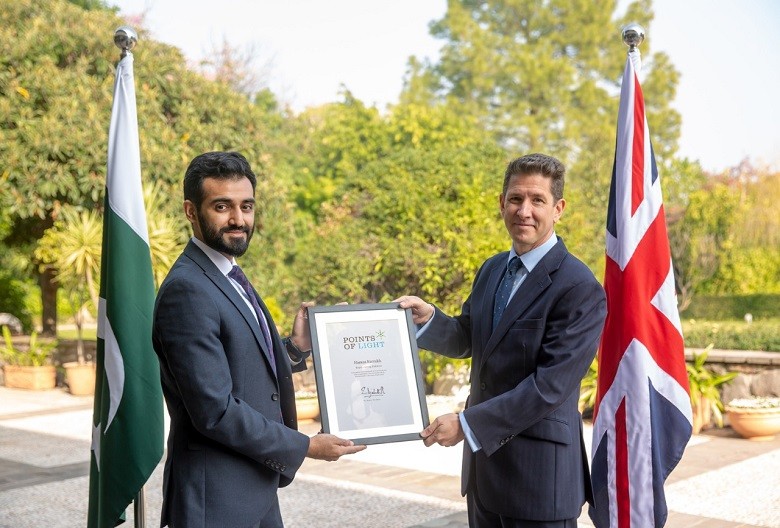 Hamza Farrukh runs a charitable project ‘Bondh-E-Shams’ (droplets of sunshine) which is serving over 45,000 people across 13 remote Pakistani villages.

Hamza began Bondh-E-Shams’ as a college project in March 2014, focusing on one particular Pakistani village. He was then awarded further funding to set up the charity, which has now provided over 10 million cups of water to people in remote communities in Pakistan through an environmentally friendly, solar-powered water extraction and filtration system.

Hamza Farrukh said: “At Bondh-E-Shams, we have promised to take on the global water crisis: lack of access to safe water in large swaths of developing nations is symptomatic of the numerous structural disadvantages faced by the global south. My team and I realise the responsibility we have towards the 1.2 billion people who go to bed thirsty each night, and are dedicated to this lifelong fight.”

The British High Commissioner Dr. Christian Turner, said: “I am delighted to present Hamza Farrukh with the Commonwealth Points of Light award for his exceptional voluntary service and ingenuity in helping to provide safe drinking water to tens of thousands of Pakistanis. Her Majesty The Queen has recognized Hamza as Pakistan’s Point of Light for delivering a significant impact on the lives of others.”

Bondh-E-Shams has leveraged the power of smart-tech and I-o-T in flagship solution called the “Oasis Box:” a transportable, solar-powered water filtration unit that removes 99.99% of water contamination and can be installed in under a record 7 minutes, anywhere in the world.

The Points of Light award recognizes outstanding volunteers every day of the week people whose service is making a difference in their communities and whose story can inspire others to creative innovative solutions to social challenges in their own communities and beyond.

Since 2014, the UK Prime Minister has been recognising a daily Point of Light from the UK, with more than 900 volunteers now recognized.

Following the success of this programme, Her Majesty The Queen decided to continue this work and award one volunteer from each Commonwealth country every week leading up to the Commonwealth Heads of Government Meeting in Rwanda in 2020.