Since I have a deep interest in the documentation of history. therefore, I could not miss Judenplatz Museum Vienna which is one of two parts of Jewish Museum Vienna.

This is about the Jewish history of Vienna from past to present. The first floor has a permanent exhibition showing Jewish history from 1945 to the present time, the exhibition continues in the next section documenting Jewish history before 1945 to Middle Ages. Jewish life now and then has been collected as people’s history. It comprises photographic memories, diaries, books, visual arts personal belongings such as toys and clothes, each item has a tale to tell a journey to cover. The idea of collecting individual experiences is painstaking in terms of curation but adds tremendous authentic emotional value for the visitors.

The “Box for Lilly Bial” packed by Dr. Franze and Anna Bial contains toys, books, pictures for their daughter Lilly, who manage to escape with children transported to England. Box remained with her parents who later got killed, in 2004, seventy-nine years old Lilley came back to Vienna and got her box packed for her by her parents. She then donated that to the Museum, she died in 2004 in England. 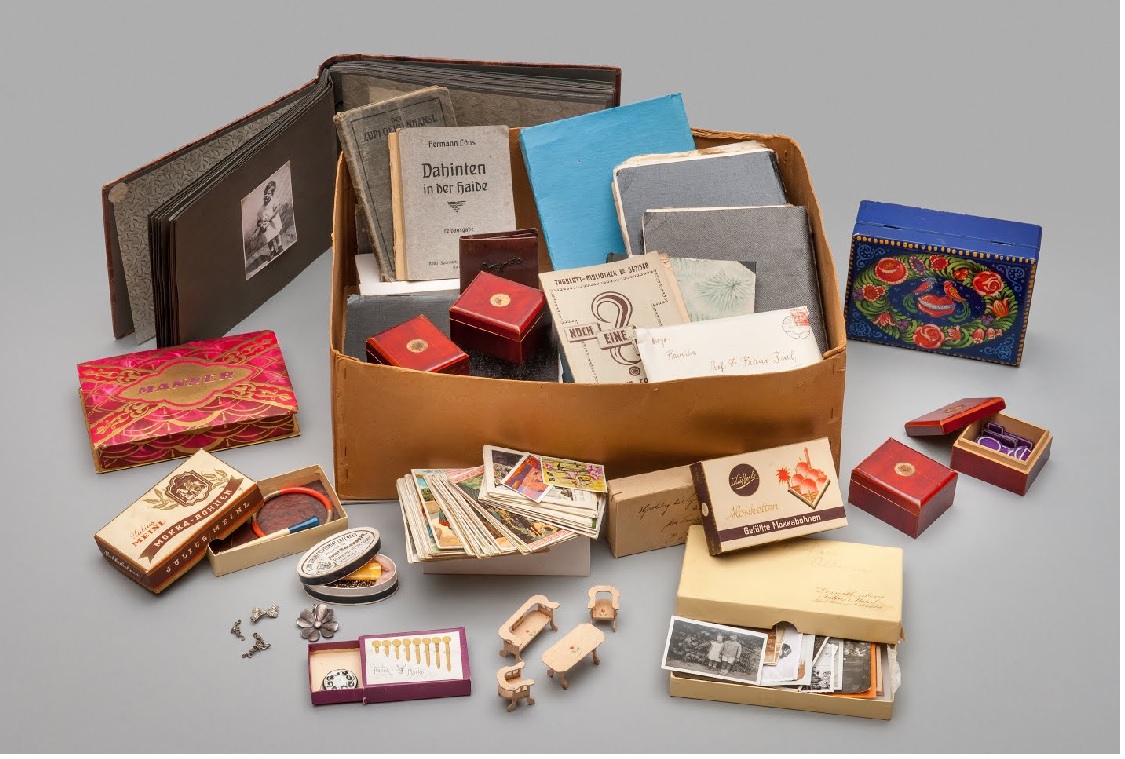 Photographs of Rothschild Hospital in Wahringer Gurtet during 1945-1955 taken by photographer Wolf Scharf are a pictorial depiction of the life of the refugees inside the hospital, people using wooden banket to survive extreme cold, are shivering realities. The disease and hunger capture by Wolf Scharf could be an emotional torpedo for any person. Collection of personal memories can hardly let you look the other way. What humanity is capable of, stares right at your face.

Handmade chess made in a concentration camp, surviving of wedding photo in the torn, worn-out pocket can relate to the basic survival instinct of hope and power of dreams.

Privileged to see the world-famous picture of Bukharan Jews Performing the new year Ritual at the Danube. The photograph was captured by Harry Weber showing men from the Sephardic Center performing tashlich, a ritual in which the concerns of the previous years are cost off in the form of crumbs thrown into flowing water.

As it advanced westward, the red Army reached Austrian territory on March 29, 1945. Both sides faced heavy losses, but SS troops were murdering Jews even in the last hours of the war. Jewish photographer Yevgeny Khaldei was with soviet troops to record the victories, none the less his camera’s eye saw destruction and devastation, instead of heroic victory. Yevgeny Khaldei’s collection is a precise documentation of the war, its aftermath, and the murder of his entire family by Nazis. His collection is the testimony of the darkest of times in human life.

Museum also documented the Austrian Constitution Law as Hans Kelsen a Jew played an instrumental role in drafting the law. As the architect of the constitution, he still exerts a major influence in Austria.

The exhibition dedicated to him pays tribute to the life and thoughts of Kelsen in Europe and the USA with a view to also draw greater public attention to the success story of the Austrian constitution.

A generous space has been given to Salzburg Festival. The display shows a hundred-year history of Salzburg’s open-air theatre. Max Reinhardt joined up with writer Hugo von Hofmannsthal to implement his vision to Salzburg. They transform the city into a stage, turning Cathedral Square into a setting for “Every Man”, and by doing so transform a small town into an international cultural arena. After the first performance in 1920, it becomes the hub for Avant-Garde performing and visual art. The exhibition titled “Every Man’s Jew” recollects the bitter memories of 1938 when Jews were prohibited to enter into the very arena they created for everyone. Max Reinhardt died in lonely exile in the USA. The exhibition spotlights him once again and many other Jewish protagonists of the Salzburg Festival.

Jewish Museum Vienna displays the relics recently excavated from the heart of Vienna, Judenplatz. Beginning in the thirteen centuries, a Jewish quarter with a magnificent synagogue took root here. Museum vividly presents the excavation of the medieval synagogue, destroyed in 1421, and the topography of the former Jewish quarter.

The Jewish Museum Vienna has taught me that oral history in the forms of memories and dreams can be curated and restored for authentic ready reference. Histories are always documented by the winning sides, the ones who got oppressed systematically get deprived of their version of a historic event, only one thing cannot be taken away and that is memoirs. It requires the difficult task for a curator, of going door to door and asking for stored memories in the form of hopes and dreams. What they offer may differ from the constructed realities, but it weighs much more than what winning sides are being propagated.