In the predominant regional geopolitical environment, China is one of the key players in Asia. Globally, China is being viewed as a leading power, which is likely to determine the future direction of the international system and regional politics. In this context, the deeply rooted Pakistan China relations occupy an important place in the global and regional milieu, capturing the attention of policy analysts, experts, and leaders. The recently published book by Dr. Talat Shabbir, “CREATING SHARED FUTURES, Pakistan-China: A Journey of Trust and Friendship” is a valuable and befitting contribution to the literature available on Pakistan-China relations.

Overall, the book by Dr. Shabbir traces the journey of trust, strategic convergence, and friendship undertaken by both China and Pakistan for seven decades. The book gives a detailed historical background of Pakistan-China relations and gives an in-depth description of geopolitical advances between the two nations. The author has opted a historical approach to describe various developments combined with some striking excerpts of analysis thus attempting to trace the logic and the reasons, which navigated the direction of this cordiality between the two nations into a rock-solid friendship and all-encompassing strategic cooperation.

Dr. Shabbir unfolds the story of formative years of China-Pakistan relations explaining the 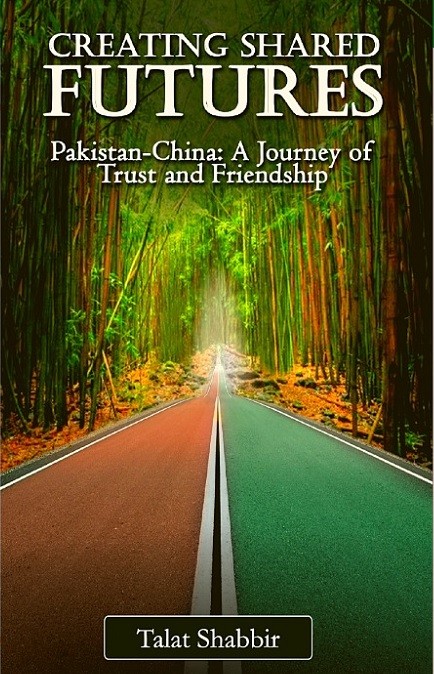 cold war dynamics and their impact on the two nations, the governing factors which brought them together. The writer recollects important events that took place in the 1960s. He points out a major turn in Pakistan-China relations when Pakistan facilitated China’s rapprochement with the US. He also outlines how the border dispute between India and China was responsible for setting a base for strong friendship between the two countries. The arms embargo and the overwhelming nature of Pakistan-US relations increased Pakistan’s trust and dependence on China. After the Pakistan-India war in 1971, China made efforts to take its relationship with Pakistan to next level by building strategic and economic infrastructure in Pakistan, which according to the author was the indication of a long-lasting camaraderie and partnership between both countries.

China adopted a balanced regional approach in South Asia and by developing its ties with India but at the same time, it indicated that it would work on expanding its relationship with Pakistan and other South Asian states. This predicted the future direction of Chinese policy towards the region. China continued to provide crucial defense and strategic support to Pakistan and has remained Pakistan’s most trustworthy arms supplier. In chapter 4 Navigating Troubled Neighbourhood title, Dr. Shabbir comprehensively sheds light on the global setting after 9/11 and its effect on Pakistan China relations and the world order. He also puts it into the context of Pakistan-China relations. The author tries to bring in the central point or crux of how the changes in the security landscape triggered by 9/11 strengthened Pakistan’s ties with China, creating prospects for a steady strategic and economic cooperation. Getting involved into a mega-venture like China Pakistan Economic Corridor is the most significant demonstration of the strength of this relationship.

To sum it up, the book offers insights rarely written so comprehensively about the history of this relation between the two countries, how this journey of trust and trade began, in what ways the two countries traversed through the changing regional and global dynamics navigating through complex conflicts, troublesome neighbours and natural disasters through the able leadership of the two countries. Dr. Shabbir has opened up the tapestry of different facets of this relationship ranging from art and culture to people, politics, arms race, diplomacy to the economy, and economic cooperation. He has opined that the ever-changing and strengthening stature of China regionally and globally has already set up a strong base for robust and lasting China-Pakistan relations and the success of CPEC will surely add more significance to this association. The author also writes about the period when COVID19 was at its peak in China and later in Pakistan. He admires the wisdom and strategy of President Xi Jinping, the way he dealt with the situation with a top-down policy. He also appreciates China for helping WHO, other countries, and Pakistan in controlling the COVID-19 pandemic. Dr. Shabbir has emphasized that Pakistan in the times to come will have increased importance for China in terms of both politics and economics. He has emphasized that both countries should work for hand in glove to tackle post-pandemic challenges. Apart from this, CPEC should be a top priority for Pakistan and China and the projects under it should pick up the pace.

Mati
Mati-Ullah is the Online Editor For DND. He is the real man to handle the team around the Country and get news from them and provide to you instantly.
Share
Facebook
Twitter
Pinterest
WhatsApp
Previous articlePakistan thanks China for providing Sinopharm COVID-19 vaccine
Next articleNida Yasir Star-studded Birthday Bash Takes Social Media By Storm!