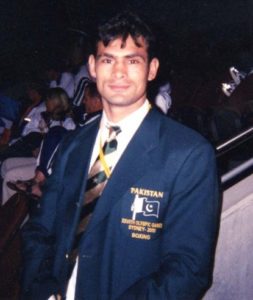 OTTAWA, Canada: The body of late Olympian boxer Usmanullah Khan has been repatriated to Pakistan for burial in his hometown in Faisalabad.

The late legendary boxer Usmanullah Khan lost his fight against a brain tumor and expired in Toronto on February 21, 2020.

On hearing the news of his sad demise in Toronto, the High Commissioner Raza Bashir Tarar, on the desire of the bereaving family, instructed for expeditious completion of legal formalities to repatriate the mortal remains to Pakistan.

The Consulate General of Pakistan in Toronto coordinated with the concerned Ontario government departments, local funeral home, and Pakistan International Airlines (PIA) for the completion of formalities and meeting legal requirements for transportation of the national hero’s body to Lahore.

Earlier in Toronto, a large number of community members along with the Consul General and some of his family members participated in funeral prayers of the Late Usmanullah Khan.

Mati
Mati-Ullah is the Online Editor For DND. He is the real man to handle the team around the Country and get news from them and provide to you instantly.
Share
Facebook
Twitter
Pinterest
WhatsApp
Previous articleWatch the Latest Episode 24 of Ehd-e-wafa online with review
Next articleTop 10 Pakistani Celebrities Who Dress Up Modesty