LAHORE, Pakistan: An explosion took place during an anti-encroachment drive on Ferozpur Road in Lahore on Monday afternoon, causing deaths of at least 26 persons including nine policemen.

Rescue sources said that the blast took place at Kot Lakhpat Sabzi Mandi near Arfa Karim IT Tower which also left 58 further people injured. They said that due to the blast, three motorcycles also caught fire.

The Inspector General of Police (DIG) Operations said that it was a suicide blast in which a comp of policemen was targeted.

Police said that some policemen were also among the casualties. 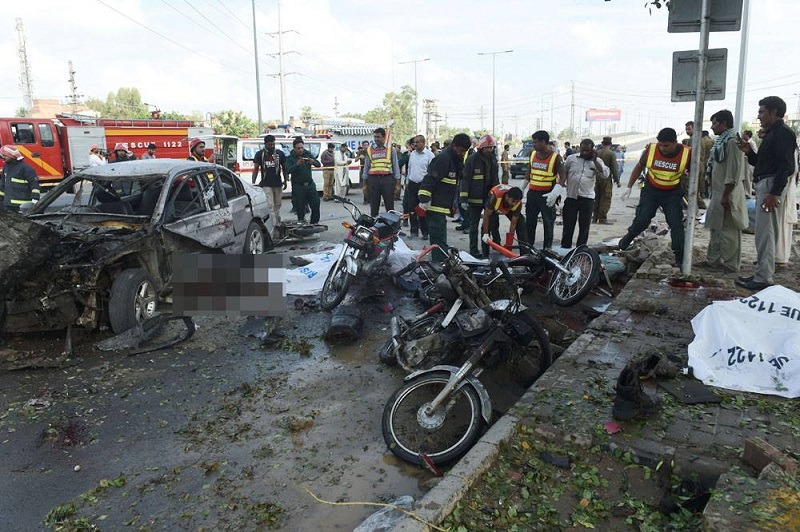 Talking to the media, the Punjab government Spokesman Malik Muhammad Ahmed Khan said that a few old buildings were being demolished near Arfa Karim Tower as part of an anti-encroachment drive.

The Spokesman said that emergency had been imposed in all nearby hospitals following the blast.

The dead bodies and injured were shifted to Jinnah Hospital, General Hospital and Ittefaq Hospital.

The Senior Superintendent of Police (SSP) Operations said that the Lahore Development Authority (LDA) was demolishing a building, and a heavy contingent of police was deployed there to deal with any issues.

Huge explosion near my office, Arfa Tech Park. I can see several people hurt and fire from my office. Allah khair… pic.twitter.com/tgnS1APE5n

While expressing deep grief and sorrow over the loss of precious lives in the blast, the prime minister prayed for eternal peace of the departed souls and grant of courage to the bereaved families to bear this irreparable loss.

The prime minister directed for extending best possible medical treatment for the injured and prayed for their swift recovery.

While expressing sympathies with families of the deceased, the Chief Minister directed best medical facilities to the injured. He also ordered to expedite the rescue work.

Mati
Mati-Ullah is the Online Editor For DND. He is the real man to handle the team around the Country and get news from them and provide to you instantly.
Share
Facebook
Twitter
Pinterest
WhatsApp
Previous articleSaudi Hajj ministry to launch ‘Electronic Online Service’
Next articlePakistan concerned over blame game, COAS tells US Commander