MONITORING DESK: Dalits protesting all over India under the slogan of “Bharat Bandh” got political and legal triumph today (Tuesday) as Supreme Court of India explained its own verdict of last month and said that its judgment in no way dilutes any provision of the SC/ST Act or rules.

“We have not diluted any provision of SC/ST Act and only safeguarded interest of innocents from being arrested.

“The SC/ST Act is a substantive law and we have just asked that implementation of it would require adherence to procedural law as given in criminal procedure code,” the bench explained its own verdict.

The Bench clarified that the affected person is entitled to the compensation even if registration of FIR is still pending.

SC has also listed the review petition after 10 days for detailed hearing though SC refused to list the petition “out of turn” before riots erupted in all over India on Monday. SC said before Monday that the petition would be listed as according to its turn—a process that could delay listing of petition for several months or even a year due to thousands of cases awaiting their hearings in Indian judicial system.

Meanwhile, protests continue all over India a spread in Meerut where protesters burnt private and public transports.

Dalits in Gwalior protested on Tuesday against hurriedly cremation of four Dalits boys by police at night instead of going for autopsies of dead who were brutally killed by gunfire and there was video evidence shooting at Dalit boys allegedly by supporters of the BJP Member of Parliament Narendra Tomar.

Look at these #BharatBandh champions…how proud they walk, & how loud they talk 😃😅😂🤣

Mayawati Das of Bahujan Samaj Party (BSP) said that her party was not behind violence and was protesting peacefully but some people spread violence during the protests. It is noted that killing of Dalit youth is reported mostly in thoses states where BJP is ruler. Dalits claim that supporters of BJP killed over 13 Dalit boys in BJP ruled states like MP, Rajasthan and UP.

Father of Dalit boy Amaresh who was killed in riots in Muzaffarnagar said his son was murdered by BJP supporters. “Our protest was peaceful and we were not demanding anything against Indian Constitution but BJP supported attacked our rally and killed several Dalit boys including my son. India is now only for BJP supports, said Jamim; father of deceased Amaresh while talking to local media.

National Highway # 11 between Agra and Bikaner is still closed for all type of traffic as protests continued in Neemakathana town of Sikar city.  Neemakathana town is completely closed and police contingents are roaming in town.

Uttar Pradesh (UP) is slightly calm now under presence of law enforcing forces including police. Praveen Kumar, DIG of Uttar Pradesh said that all districts in the state are put on high alert. He said that 448 protesters have been detained so far.

Examinations of Class 12 and Class 10 have been postponed for indefinite period and Punjab and educational institutions remained closed while train and bus services are yet to be restart after their suspension on Monday afternoon. Internet and mobile services are still unavailable and two companies of the Border Security Force (BSF) are looking after law and order situation while assisting local administration.

Reports from Patna said that more than 3,000 people were held by the police across Bihar for disruption of public order during the last 24 hours.

Situation in Jharkhand is yet not under control and police were trying to control riots by using tear gas in Ranchi and 900 arrests were reported only from Ranchi district. 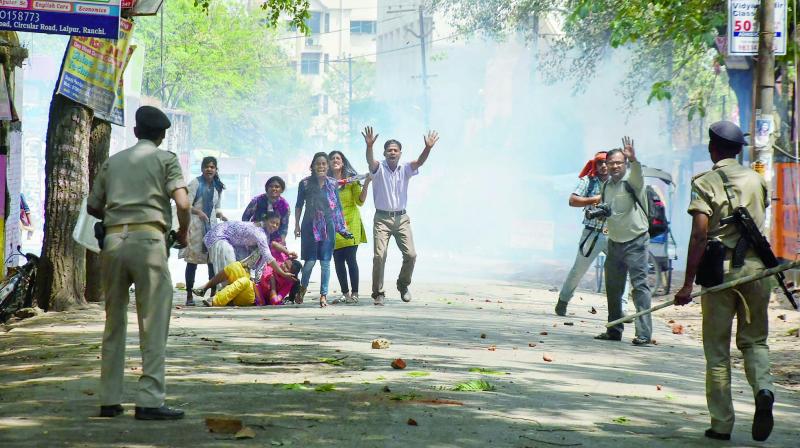 Home Minister of Madhya Pradesh Bhuepndra Singh during his talk with All India Radio claimed that situation in the state is normal and extra law enforcing forces are marching in the State. The State of Madhya Pradesh is still under Curfew with relief at morning time.