Belarusian Scientists will be visiting Pakistan in early December

Talking to the Belarusian Ambassador Andrei Ermolovich in Islamabad on Wednesday, the Minister for National Food Security & Research Sahibzada Muhammad Mehboob Sultan expressed his pleasure regarding the upcoming visit of Belarusian Scientists.

The minister talked about upcoming fifth session of Joint Working Group (JWG) in Belarus which is likely to be held in February next year. 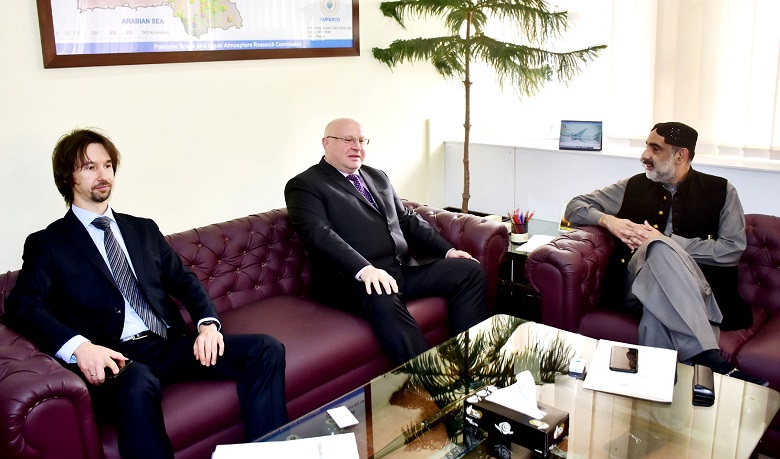 Sahibzada Mehboob Sultan said that Pakistan is an agrarian economy and the current government is committed to uplift the farmers and bring agriculture revolution in the Country.

The federal minister said that his ministry plans to formally invite the agriculture minister of Belarus to Pakistan as these bilateral visits will boost the cooperation between two Countries in shift of technologies, machinery, dairy processing and seeds.

The ambassador apprised the federal minister that Belarus stands second in dairy products in the World and Pakistan could benefit from the dairy industry of Belarus.

Mehboob Sultan further said that negotiations regarding viable tractors and other agro machinery/implements could be planned and also welcomed the proposal from Belarus ambassador to identify the list of potential dealers and reliable business partners.

The minister showed his interest in cotton picking machinery/tools of Belarus which could be benefitting for Pakistan as Pakistan is fourth biggest producer of cotton in the World. He further said that Pakistan gives great importance to Belarus and is eager to exploit the potential in the related field and the JWG and potential visit of the Agriculture minister from Belarus augurs well.

The Belarusian ambassador said that Belarus values its trading partner Pakistan and invited the federal minister to the international exhibition which is going to be held in June next year. He said that it is a great platform to strengthen the ties and explore new avenues of cooperation in agriculture and its allied fields.

The Counselor Economic Cooperation Vladimir Papsuev also accompanied the Belarusian ambassador. While the Federal Secretary NFS&R Dr. Muhammad Hashim Popalzai and important officials of the Ministry and PARC were also present in the meeting.

Mati
Mati-Ullah is the Online Editor For DND. He is the real man to handle the team around the Country and get news from them and provide to you instantly.
Share
Facebook
Twitter
Pinterest
WhatsApp
Previous articleHUAWEI Y9 2019 now available in Aurora Purple colour
Next articleOLX CarFirst Car Bazaar in Lahore on November 18