Beauty Secrets of Naimal Khawar Revealed – All You Need To Know

The beauty queen Naimal Khawar Khan has finally revealed the secrets behind her gorgeous looks especially for her fans. If we have a look around the showbiz industry of Pakistan, we would be having an absolute conclusion that none of the actresses have as much glowing face as that of Naimal’s. That’s the reason everyone wants to know about how she manages to maintain the glow of her skin and that baby skin like; texture which never goes unnoticed.

Naimal khawar has played an important role in her beautiful looks. She belongs to a family where her mother is Persian while father belongs to a Pashtun background which is the simple answer to her utmost attractiveness. But that’s not all! She has some tips for the glow of the skin as she is having for her fans and these secrets are going to make you look stunning all the time. Here are the beauty secrets of Naimal Khawar:

Use Good Oils for Skin

According to Naimal Khawar, you need to oil your skin properly. She said “Buy a good Almond oil, Coconut oil, and Olive oil. Massage that on your skin as well. I always ask my mother to get organic oils for me. They are easily available. Pure’s Oil removes the layers of dead skin, sure to leave you with more healthy and glowing skin”. 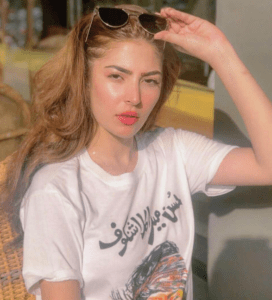 Naimal shared the secret to beauty that moisturizing your skin is such an important thing to do. “I moisturize my skin after every five minutes. It’s so necessary.” It will help to keep the skin healthy and hydrated.

Minimal makeup is something so much related to Naimal’s beauty. She even used the makeup at the least on her wedding day as well and she later revealed that she did it herself. “Don’t wear a lot of makeup. Always invest in a good makeup remover and never wear makeup to bed!”

Naimal emphasizes on making a habit of drinking lots of water. She revealed that she consumes about a liter to two of water every day. “It makes all the difference! Trust me. Have at least 1 liter of water every day. Your glowing skin needs to be hydrated,” she said.

Say No to Caffeine

Naimal suggested for the glowing skin that, “Say goodbye to your coffees and teas, ladies. I think caffeine makes people break out the most”. According to her, the consumption of caffeine can prove to be destructive for the skin glow.

Dawood Hassan
Dawood Hassan is one of our SEO consultants and lead content managers. His wide range of expertise has helped us grow and provide you with better quality content.
Share
Facebook
Twitter
Pinterest
WhatsApp
Previous articlePM Imran Khan urges Int’l Community to take stock of plight of Kashmiris
Next articleCGSS Organizes Online Conference on ‘Impacts of COVID-19 on Agriculture Sector in Pakistan’