The noir novel The Third Man strongly evokes the feeling of frailty and quasi-nihilistic pathos that violence leaves on people living it. Depicting post-war Vienna, ‘a city of undignified ruins’ it says—“The eyes feel flat and tired; the mood is one of sad patience; it seems an ugly story, grim and sad; Poor all of us, when you come to think of it”. The recent shocking survival story of a three-year-old child from Kashmir (read as Indian Occupied Kashmir) brings us nearer to such a weary realization of vulnerability.

A child, who cannot grasp what death means, narrates the murder scene of his Grandpa by figuring out thud of gunshots: ‘He was shot dead….. Thhaak, Thhaak, Thhaak……’ His innocence is too traumatized to understand how horrific history has turned him into an unfortunate witness.

When it is a child, it is about every child of Kashmir. Be it from families of power elites or the general public; the progeny of police personnel or offspring of militants —no child is actually immune to mental and physical trauma inflicted by this ghastly conflict. The trauma during their childhood is bound to get expressed later during their life in a hostile and resentful manner. 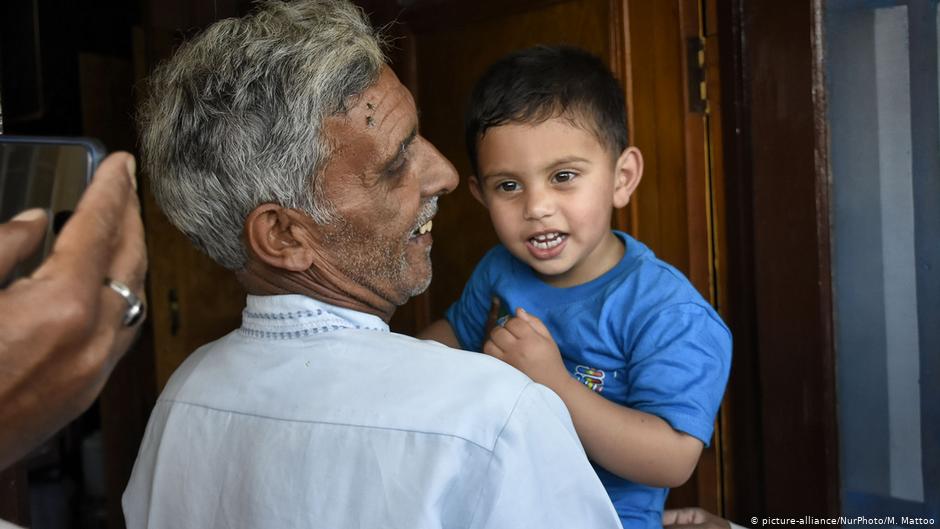 The fact remains that the whole flock of juvenile minds here stands testimony to such terrifying tyranny. They are witness to heartless and harsh realities devouring them down every day. Violence and bloodshed remain a daily occurrence for them.  Death and uncertainty hover around them. Every moment. Dancing out the dreadful pain. Painting it in various forms. Blood splashed roads. Gasping souls. Terminal hospitals. Pelleted eyes. Bulleted bodies. Charred debris. Every stroke of reality colours their kismet. Brushes the intense fears that overwhelm them while coating the dire doubts overcoming them.

As this psychologically battered three-year-old grows up, he will carry the blurred scars of his macabre memory. And, such memory will probably weigh heavily on his future as he shuffles to forget as well as mourn so that he can move on in life. Blanketed in fear, and without a true framework of identity, he will struggle to make sense of his own memory. In fact, the power of one unusual image— infancy sopping over the blood-spattered corpse of  Grandpa—is going to be unusually chilling and intimidating not only for him but all of us who continue to suffer the devastating consequences of any photo-op mayhem, for now, and for years to come. This trauma is and will continue to talk back in different forms and lingos, whose nuances are turning too complex to decipher. More so, when stories from Kashmir aren’t ending in a day, and are getting replayed for years, culminating in a whole mound of anger and alienation.

Of course, all of us have our own memory. Whenever we arrive at a collective memory of this gory conflict, we either inherit a deep sense of loss or an embittered sense of identity. It may prove a huge tsunami or a quiet volcano massing together under the shared memory. Whatever it is, it is going to resonate with a roar for a reprieve. From conniving politics. From misrepresentation. From mystification. From din. From disorder. From massacres. From mournings. From the nonstop interplay of brutality and bereavement.

Enough of it! Life in Kashmir has to bite the bullet. The blood-stained saga and spectacle of combat and militarization has to go. The discourse dripping hatred and hostility needs an end. The drama of death needs closure. We all deserve a Right to Life; a grit and choice to stand up against the settlers and sellers of death,   destruction and deception.

Bottomline: In the novel The Ministry of Utmost Happiness, a Kashmiri character while writing a letter to his five-year-old daughter who was killed, deftly visualizes her funeral and jots down—“In our Kashmir the dead will live for ever; and the living are only dead people, pretending”. We, the walking dead, are perhaps too powerless to contain the trauma that is consistently taking the toll of our mental health. Yes, it forces itself talking back but its “speaking” is not always plain and passive. And, that continues to be a solemn point of our suffering.