Bangladesh and Pakistan are Crossing the Frozen River

On the right path of reaching the common destination, in the last three days, Bangladesh and Pakistan covered a distance of the last 30 years.
On March 23, 2021, Prime Minister of Bangladesh Sheikh Hasina greeted Pakistan on its National Day in a letter written to Prime Minister of Pakistan Imran. I did not find news in Pakistani media and got information from Dhaka based media about this historic development.

In her letter, PM Hasina said that Dhaka committed to peaceful and cooperative relations with neighbours, including Islamabad, and added that existing bilateral relations between Bangladesh and Pakistan have immense potentials to deepen and diversify in future. 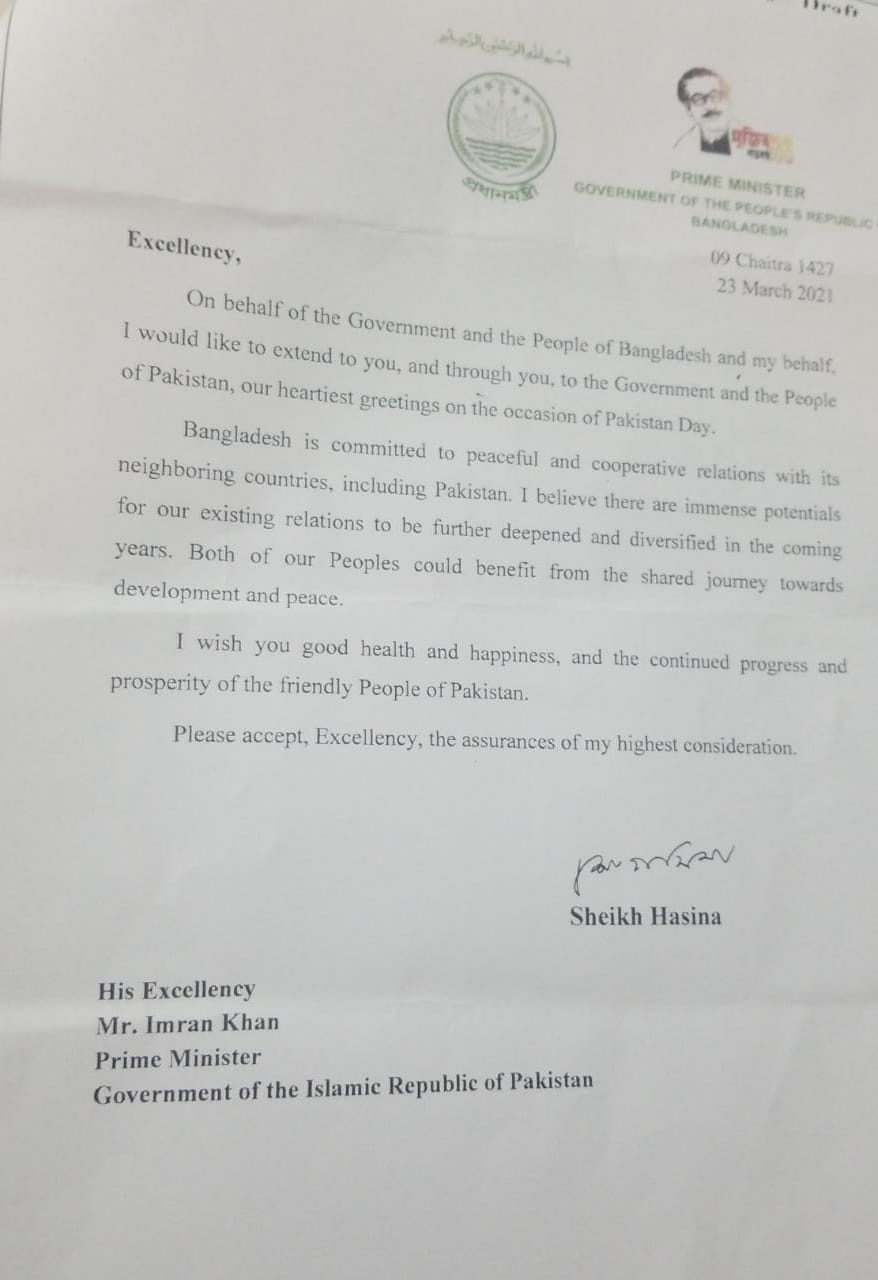 Foreign Minister of Bangladesh Dr. Kemal Hossein after signing a tri-partite agreement among Bangladesh, India and Pakistan in New Delhi on April 9, 1974, said that the efforts for enduring peace in the subcontinent will put an end to conflict and confrontation

On March 25, 2021 (today) Prime Minister of Pakistan Imran Khan felicitated the People’s Republic of Bangladesh on its 50th Independence Anniversary and sent a letter to PM Sheikh Hasina to visit Pakistan.
One of the most important parts in the letter of PM Khan is remembering President and Father of the Bangladeshi Nation late Sheikh Mujibur Rahman. This para says:
The centenary events to commemorate the late Prime Minister Sheikh Mujibur Rahman are reflective of the deep affection and esteem in which he is held by yourself and the people of Bangladesh.
Pakistan deeply values its fraternal ties with Bangladesh, which are based on shared history, common faith, and convergent interests in promoting lasting peace and security as well as sustainable prosperity in our region and beyond.

PM Imran Khan said that the centenary and the Golden Jubilee of Bangladesh remind us of the far-sighted vision of reconciliation and friendship between our two peoples, so dearly cherished by the leaders of Pakistan and Bangladesh.

War always brings collateral damage and all stakeholders of war face the brunt but it does not mean that nations cannot move forward.

PM Khan hoped that both countries would fortify existing bonds and build new ones for succeeding generations because the destinies of both nations are intertwined.
I consider these developments as covering a long distance between the two nations. We remember that the then Foreign Minister of Bangladesh Dr. Kemal Hossein after signing a tri-partite agreement among Bangladesh, India and Pakistan in New Delhi on April 9, 1974, said that the efforts for enduring peace in the subcontinent will put an end to conflict and confrontation, and the 700 million people of the subcontinent will be able to live as good neighbours.
Some of my Bangladeshi friends always ask me that bilateral relations between Bangladesh and Pakistan could be normalized if Pakistan apologises to Bangladesh for whatever happened during the 1971 phase of independence. I usually keep quiet on such responses because I do not want to engage in contradiction or debate with friends who forget the historical perspective of their demand—an apology from Pakistan. They should remember that Pakistan did this during April 9, 1974 meeting and this point was also included in the agreement signed by all three countries. I am including this agreement in my article for ready reference for my Bangladeshi friends.
Point/clause 15 of this agreement says:

“In the light of the foregoing and, in particular, having regard to the appeal of the Prime Minister of Pakistan to the people of Bangladesh to forgive and forget the mistakes of the past, the Foreign Minister of Bangladesh stated that the Government of Bangladesh had decided not to proceed with the trials as an act of clemency. It was agreed that the 195 prisoners of war may be repatriated to Pakistan along with the other prisoners of war now in the process of repatriation under the Delhi Agreement”

War always brings collateral damage and all stakeholders of war face the brunt but it does not mean that nation cannot move forward. Now this is time for Pakistan and Bangladesh to move ahead leaving the ashes of the 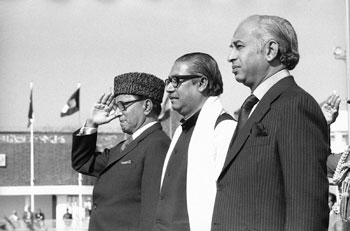 past far behind them

Leaving the harsh memories behind and paving a new way is necessary for Bangladesh and Pakistan. Forgive me if I sound a little rough but the reality is that Dhaka has been marginalized in many aspects regarding regional diplomacy due to assertive New Delhi and I can feel that Bangladesh has realized that India is only serving its own purpose of maintaining hegemony in the region.

Apart from Bangladesh other South Asian Association for Regional Cooperation (SAARC) countries have also got this realization. Siri Lanka, Nepal, and Bhutan are also in the process of new alliance formation.
The step taken by both the countries Bangladesh and Pakistan is not only mature but time-effective also. CPEC and Road and Belt initiative have shown new opportunities to Bangladesh and all future collaboration, economic or social will be considered revolutionary.
The generation that lived in 1971 had witnessed the war still seems reluctant to forget but the thing even more important from forgetting is forgiving. PMs of both countries dusted the surface for forgiveness now it’s time for a people-to-people connection. Bureaucracy can facilitate that but academia and think tanks are key players.
It is a perfect time to put aside personal stakes and vouch for harmony by projecting the regional neighbours not as enemies but as victims of war. We understand wars are never fought by people so the aftermath must not be created accountability on the citizen level.
More than 50 years have been passed, without knowing each other, Pakistanis have no access to Bengali, film, theatre, art, and literature and it is vice versa.

Leaders of both countries have done a tremendous job now it is our duty, which is primarily knowing each other with an open heart and smiling face. There is a need to share the literature and art that have been produced in the last 50 years with each other. University students and researchers must visit each other to initiate a positive environment for dialogue. The only way forward for Bangladesh and Pakistan is healthy communication.

Let’s curb all those elements and emotions who are suffering from cognitive dissonance moreover promoted and advocating their static ideology of vengeance.

No revenge or hateful idea can suffix the greater good of the coming generation. It is our duty to our upcoming generations to transfer a world with less pain and fewer regrets