BAKU, Azerbaijan: In a bid to commemorate the 27th anniversary of Khojaly genocide, thousands of Azerbaijani people including the President Ilham Aliyev and the first lady Mehriban Aliyeva held a March towards Khojaly Memorial in Khatai District of Baku on Tuesday, Azerbaijan’s State News Agency AZERTAC reported.

The March participants paid tribute to victims of Khojaly tragedy and drew the World Community’s attention to this crime against humanity, which was committed by the Armenian fascists. 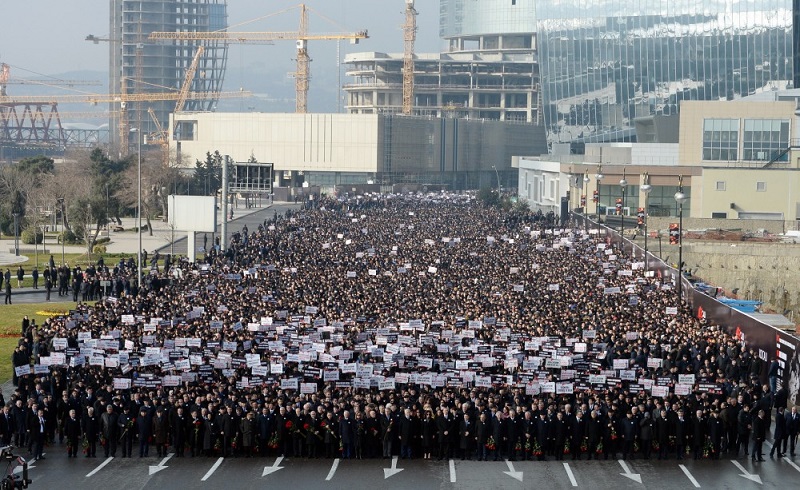 On February 26, 1992, the Armenian military units carried out an act of genocide against the 7,000 population of Azerbaijan’s Khojaly town, killing over 600 people and injuring 1,000 further.

The March participants held portraits of innocent victims of the bloody event – slaughtered children, women and elders – photos depicting abominable scenes of slaughter, placards demanding to bring to account and punish perpetrators of the tragedy and to recognize this genocide at an international level, as well as placards with names and surnames of victims.

“The world must recognize Khojaly genocide”, “Justice for Khojaly”, “Do not forget Khojaly”, “No to Armenian fascism”, “Khojaly genocide -27” and other slogans were displayed on large monitors along the streets, and on placards on building walls and balconies.

Meanwhile, the President of the Republic of Azerbaijan Ilham Aliyev put a wreath at the Memorial and paid tribute to Khojaly victims.

Likewise, the state and government Officials, members of the Milli Majlis, Ministers, Heads Of Committees And Companies, Representatives of the Diplomatic Corps, Heads of Religious Confessions, as well as Khojaly genocide survivors also placed flowers at the Memorial.

Mati
Mati-Ullah is the Online Editor For DND. He is the real man to handle the team around the Country and get news from them and provide to you instantly.
Share
Facebook
Twitter
Pinterest
WhatsApp
Previous articlePakistani lawmakers reaffirm unity to squash Indian designs
Next articlePakistan rejects Indian claim of targeting alleged terrorist camp near Balakot