BAKU, Azerbaijan: The Ministry of Foreign Affairs of Azerbaijan has strongly rejected the statement of the Armenian Foreign Ministry delivered on August 3 with ungrounded accusations against the Azerbaijani side.

It said that we remind that Azerbaijan has repeatedly reported Armenia’s failure to fulfill the provisions of the statement on November 10, 2020, signed by the leaders of the three countries, in particular, that the Armenian armed units have not yet been withdrawn from the sovereign territories of the Republic of Azerbaijan.

Pursuant to Article 4 of the trilateral statement reads: “the peacekeeping contingent of the Russian Federation shall be deployed in parallel with the withdrawal of the Armenian armed forces.”

In addition to numerous evidence on the Azerbaijani side about the presence of illegal Armenian armed forces on the territory of Azerbaijan, this fact was also acknowledged by Armenian officials.

Thus, the Deputy Chief of the General Staff of the Armenian Armed Forces Sahak Sahakyan on June 29, 2022 at a meeting with the parents of the recruits from Armenia stated that: “Armenian conscripts in the Karabakh region will be replaced by servicemen of active military service”, as well as the Secretary of the Security Council of Armenia Armen Grigoryan in an interview dated July 19, 2022 reminded that “the withdrawal of the units of the Armed Forces of Armenia from Karabakh will be completed by September of this year”.

Both statements contradict the obligations assumed by Armenia, and it clearly demonstrates that Armenia still illegally deploys its armed military formations on the territory of a neighboring state. 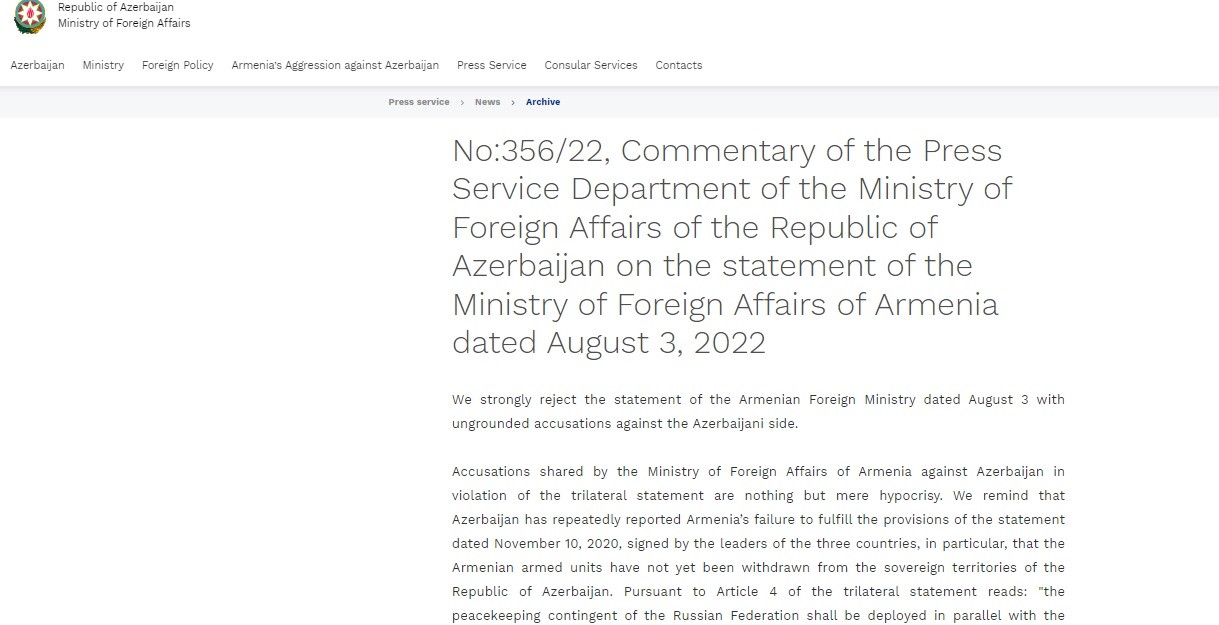 The Azerbaijan’s Foreign Affairs Ministry emphasized that the reason for the recent tension is the presence of illegal Armenian armed troops in the territories of Azerbaijan and provocations instigated by them.

It said that the bloody incident and killing of an Azerbaijani soldier on August 3 is precisely the result of Armenia’s failure to fulfill its obligations.

Referring to Article 6 of the trilateral statement, the minister added, we bring to the attention of the Ministry of Foreign Affairs of Armenia, which accuses Azerbaijan of violating the relevant provision, that the construction of a new road along the Lachin corridor has been going on for many months along the agreed route, and the Armenian side was and is duly informed about the developments.

The foreign affairs minister said that the full implementation of trilateral statements is essential for ensuring peace and stability in the region, as well as for the post-conflict normalization of relations.

Azerbaijan remains committed and fully fulfills its obligations and strongly demands that Armenia also adhere to these commitments, he said.

It further said that we remind the Armenian Foreign Ministry, which accuses Azerbaijan of “aggressive activity”, that it is clearly Armenia with its military units held the territories of a neighboring state under the occupation for about 30 years, and, after the end of the occupation policy, has not yet withdrawn its illegal armed units from the Azerbaijani territories.

The Republic of Azerbaijan ensures the security and integrity of its territory on legal grounds, it said.