Azerbaijan lashes out at Armenia for another provocation on border 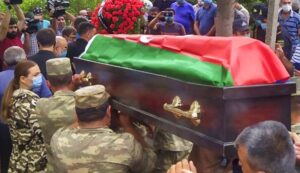 BAKU, Azerbaijan: An Azerbaijan Army Soldier was killed when the Armenian troops opened fire in the border region of Tovuz, prompting Azerbaijan’s Foreign Ministry to lash out at the neighbor’s aggressive designs and attempt to disrupt the peace, AZERTAC reported.

Azerbaijan’s serviceman Mammadov Elshan Ali oglu fell prey to the Armenian attack on Monday which the Press Service Department of Azerbaijan’s Foreign Ministry termed a “bloody provocation” and a “clear demonstration of the Armenian government’s real intention which is about continuing the aggression, and not achieving a peace.”

In its statement, the ministry further said that the military-political leadership of Armenia bears all the responsibility for this bloody crime committed by the enemy forces on the Armenia-Azerbaijan border.

The foreign minister also paid tribute to the martyred soldier for sacrificing his life for the Country and prayed for his soul.

“May God bless the soul of our Martyr who died for the sovereignty and territorial integrity of our state, protecting the internationally recognized borders of Azerbaijan!,” the minister said.

Mati
Mati-Ullah is the Online Editor For DND. He is the real man to handle the team around the Country and get news from them and provide to you instantly.
Share
Facebook
Twitter
Pinterest
WhatsApp
Previous articleAima Baig And Shahbaz Shigri Top 11 Romantic Pictures for couple goals
Next articleHuman Capital Investment Project launched in Punjab’s 11 poorest districts