ISLAMABAD, Pakistan: The Speaker National Assembly Sardar Ayaz Sadiq has said that Pakistan greatly values its cordial relations with Oman, and the decades-old warm relations between the two Countries need to be taken up to new heights through economic and parliamentary cooperation.

“Pakistan attaches immense importance to its fraternal relations with Oman. The bilateral relations are historical, deep-rooted and based on commonalities of faith, culture and traditions,” the Speaker said while talking to the ambassador of the Sultanate of Oman Al Sheikh Muhammad Omar Ahmed Al Marhoon at Parliament House in Islamabad on Thursday.

“Geographical proximity between Pakistan and Oman can offer a great scope to both countries to step up the bilateral relationship between the two Countries,” Ayaz Sadiq said. 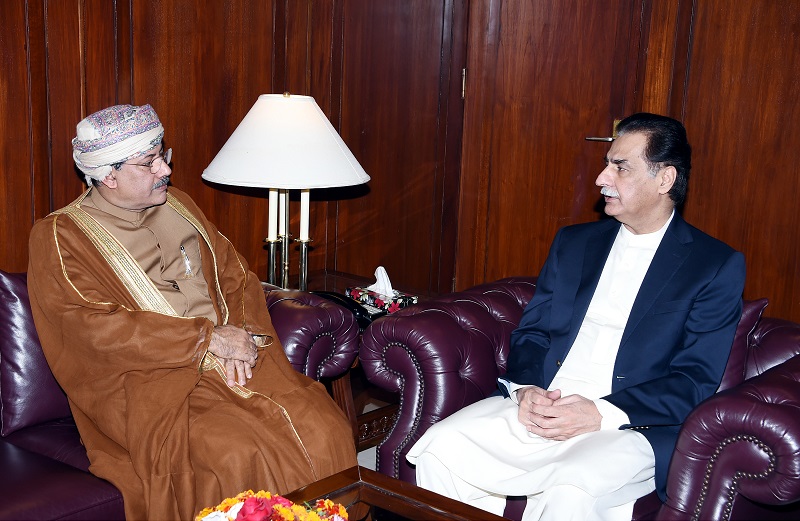 During the meeting, they discussed entire gamut of Pakistan-Oman relations, cooperation at multilateral forums and review regional peace and security.

The Speaker said that the present government has created conducive environment for foreign investment by introducing various incentives and reforms in the economic sector.

Sardar Ayaz Sadiq said that friendship and cooperation between Pakistan and Oman serve the fundamental interests of the two Countries. He also asked the ambassador to convey his invitation to his Omani counterpart to visit Pakistan.

The ambassador of the Sultanate of Oman termed relations between the two sides as historic and unique. He appreciated the kind remarks of the Speaker and said that Oman considers Pakistan as its brother and wants to further cement the ties through rejuvenating parliamentary contacts and exploring possible avenues of economic cooperation.

The envoy said that Pakistani expatriates in Oman are playing an important role in economic activity in the country. He further said that Oman would encourage Pakistan skilled human resource in diverse sectors.

Mati
Mati-Ullah is the Online Editor For DND. He is the real man to handle the team around the Country and get news from them and provide to you instantly.
Share
Facebook
Twitter
Pinterest
WhatsApp
Previous article3D lifestyle launched in Pakistan
Next articleCPEC to be functional by 2030: Pakistan’s Foreign Office