Attacks on Muslims by Hindu mobs is routine in India, reports BBC

Monitoring Desk: BBC News has reported that unprovoked attacks on Muslims by Hindu mobs have become routine in India, but they seem to evoke little condemnation from the government.

Last month, a video that went viral on social media showed a terrified little girl clinging to her Muslim father as a Hindu mob assaulted him.

The distressing footage showed the 45-year-old rickshaw driver being paraded through the streets of Kanpur, a city in the northern state of Uttar Pradesh, as his crying daughter begged the mob to stop hitting him.

His attackers asked him to chant “Hindustan Zindabad” or “Long Live India” and “Jai Shri Ram” or “Victory to Lord Ram” – a popular greeting that’s been turned into a murder cry by Hindu lynch mobs in recent years.

He complied, but the mob still kept hitting him. The man and his daughter were eventually rescued by the police. Three men arrested for the attack were freed on bail a day later.

A few days later, another viral video surfaced showing a Muslim bangle-seller being slapped, kicked and punched by a Hindu mob in Indore, a city in the central state of Madhya Pradesh. The attackers could be heard abusing Tasleem Ali and telling him to stay away from Hindu areas in future.

In a police complaint, he later alleged that he had been “beaten by five-six men who hurled communal slurs at him for selling bangles in a Hindu-dominated area and robbed him of money, his phone and some documents”.

But in a strange turn of events, Ali himself was arrested the next day after the 13-year-old daughter of one of his alleged attackers accused him of molesting her. His family and neighbours have strongly denied the accusation. They said it was inconceivable that the father of five would do something like that.

And eyewitnesses, quoted in the Indian press, said he was attacked because of his religious identity and the molestation accusation against him seemed to be an afterthought.

The two attacks were among several instances of anti-Muslim violence in August, but the last month by no means was cruellest for India’s biggest religious minority group, with a population of more than 200 million.

A ‘Not in my Name’ protest against anti-Muslim killings in India in Delhi, on June 28, 2017

Similar attacks were reported in the preceding months too – and many made headlines.

In March, a 14-year-old Muslim boy who had entered a Hindu temple to drink water was violently assaulted

In June, a vendor was beaten up in Delhi for trying to sell fruit in a Hindu locality

“The violence is overwhelming. It’s rampant and common and also very acceptable,” says Alishan Jafri, a freelance journalist who’s been documenting attacks on Indian Muslims for the past three years.

He says he comes across “three-four such videos every day” but is able to verify only one or two which he then shares on social media.

Religious faultlines have existed in India for a long time but, critics say, anti-Muslim violence has risen since 2014 under the Hindu nationalist government of Prime Minister Narendra Modi.

“Communal violence is not a recent phenomenon, but it grows in sync with the strategies of those in power and political mobilisation,” Prof Tanvir Aeijaz, who teaches politics science at Delhi University, told the BBC.

“The distrust was always there but cleavages have been sharpened now by religious nationalism and ethno-nationalism.”

During Mr Modi’s first term in power, there were numerous incidents of Muslims being attacked by so-called “cow vigilantes” over rumours that they had eaten beef, or that they were trying to smuggle cows – an animal many Hindus consider holy – for slaughter.

The prime minister did not condone such attacks, but was criticised for not condemning them quickly or strongly enough either.

Prakash Javadekar, a senior BJP leader, told the BBC that “the government believes that lynching is bad, wherever it happens. But law and order is a state subject and it is their responsibility to deal with it”.

He then went on to accuse the media of “biased and selective journalism” by focusing on attacks on Muslims.

“If you look at official data, there were 160 Hindus among the 200 people who were lynched. People of all faiths were targeted,” he said, but did not give details of where the data could be found. India does not gather such data.

In 2019, a fact-checker website that counted “hate crimes” in India reported that more than 90% of victims in the past 10 years were Muslims.

And the perpetrators of the attacks remain unpunished amid accusations that they enjoy political patronage from Mr Modi’s Bharatiya Janata Party after a government minister garlanded eight Hindus convicted for lynching a Muslim.

“Such attacks have become so common in our country today only and only because of the impunity these thugs enjoy,” says Hasiba Amin, a social media co-ordinator for the opposition Congress party.

“Today hate has gone mainstream. It is cool to go attack Muslims. The hate mongers are also rewarded for their actions.”

Sometimes, the violence is not even physical and takes a more subtle, insidious form that appears aimed at vilifying and demonising the minority community. For example:

Last year, as Covid-19 began to take hold of India, Hindu leaders, including Mr Modi’s ministers and party colleagues, accused Muslim men, who had attended a religious gathering in Delhi, of “corona jihad” by indulging in behaviour that would spread the virus

In recent months, several states have introduced laws to curb “love jihad” – an Islamophobic term fringe Hindu groups use to imply that Muslim men prey on Hindu women to convert them to Islam through marriage.

The laws are being used to harass and jail Muslim men in interfaith relations with Hindu women. Last December, the plight of a pregnant Hindu woman, who was forcibly separated from her Muslim husband, made headlines when she suffered a miscarriage.

Muslim women haven’t been spared either – in July, dozens of them found they had been put up “for sale” online. In May, many of them, including Ms Amin of the Congress party, were offered in a mock online “auction”.

And last month, participants at a rally, organised by a former BJP leader in Delhi, shouted slogans calling for Muslims to be killed. 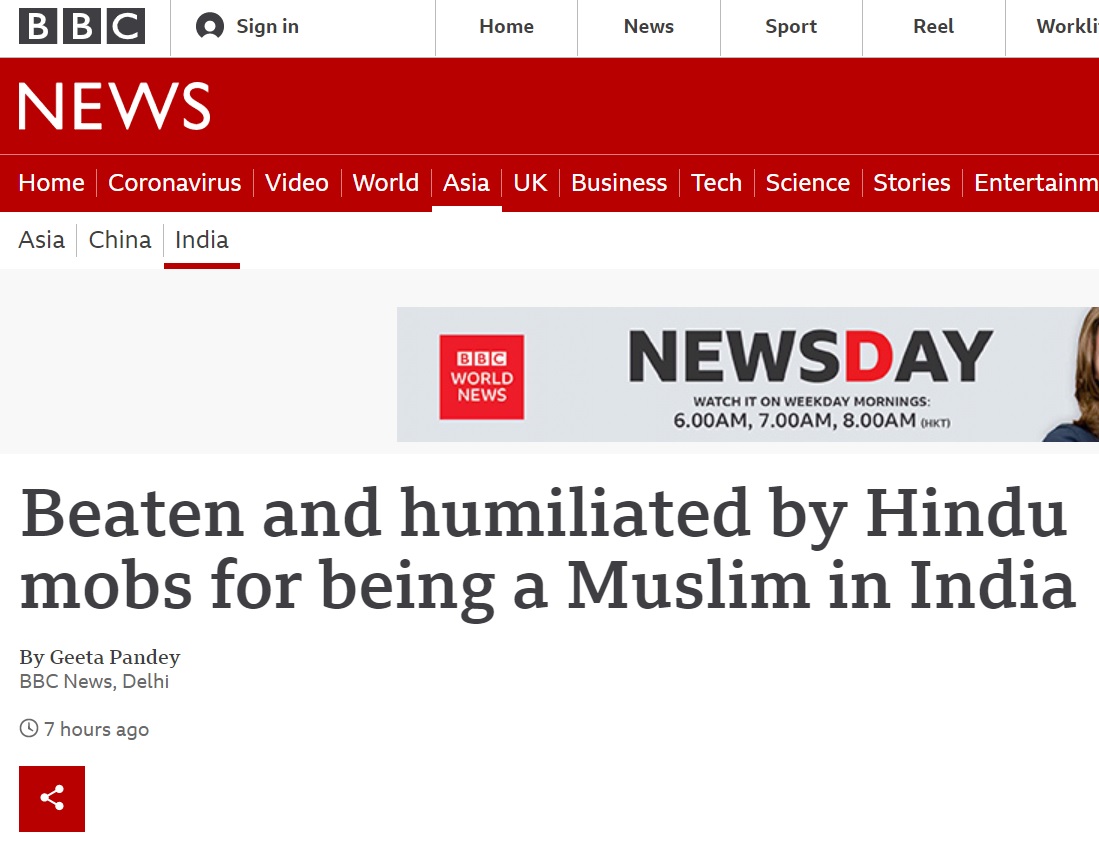 “It’s a very sustained, organised campaign by nationalist politicians to radicalise Hindus into believing that Muslims need to be marginalised if Hindus are to progress,” says Mr Jafri.

Prof Aeijaz says the attack on working class Muslims, such as tailors, fruit vendors, electricians, plumbers and bangle sellers, is also an attempt to take control of the political economy and jobs through religious nationalism.

“The religious divide has deepened. The distrust has deepened. But the hate is also for profit. The idea it to make Muslims the other, the enemy.

“The process of creating the other is by propagating the idea that if we don’t destroy the other, we will be destroyed. So you stoke hate, create fear, and violence is part of this larger narrative.”

But religious nationalism, Prof Aeijaz says, is a dangerous idea that can lead to sectarian violence. “The buck stops with the political executive in a parliamentary democracy. How long can they look the other way?”