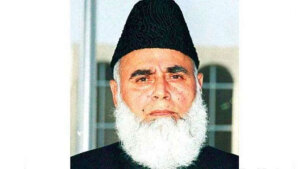 “May Allah bless his soul & give strength to the bereaved family to bear this irreparable loss, Ameen,” the COAS said according to the Inter Services Public Relations (ISPR).

The former President Muhammad Rafiq Tarar passed away in Lahore on Monday at the age of 92 after a prolonged illness.

Rafiq Tarar deceased served as the 9th President of the Country from January 1998 until his resignation in June 2001.

Earlier, he had served as a Senator from Punjab in 1997.

Before joining politics, Muhammad Rafique Tarar served as Senior Justice of the Supreme Court of Pakistan from 1991 to 1994 and as the 28th Chief Justice of the Lahore High Court (LHC) from 1989 to 1991.