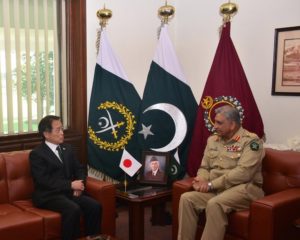 Talking to the Japanese Ambassador Takashi Kurai who met him at the army’s general headquarters in Rawalpindi on Friday to bid farewell at the end of his tenure in Pakistan, the COAS appreciated the Japanese ambassador’s efforts in strengthening the bilateral relations.

During the meeting, the two dignitaries discussed Pakistan-Japan relations and matters of mutual interest.

Meanwhile, the COAS confirmed death sentence awarded by Military Courts to 14 hardcore terrorists who were involved in heinous offences related to terrorism.

Mati
Mati-Ullah is the Online Editor For DND. He is the real man to handle the team around the Country and get news from them and provide to you instantly.
Share
Facebook
Twitter
Pinterest
WhatsApp
Previous articlePakistan Army Chief confirms death sentence to 14 hardcore terrorists
Next articleSynergy Dentsu selected to promote ‘Asaan Mobile Account’ for Financial-Inclusion