ISLAMABAD, Pakistan: The Arms Control & Disarmament Centre (ACDC) was launched at the Institute of Strategic Studies Islamabad (ISSI) on Wednesday.

The ACDC was set up as a part of the Institute for focused research and dialogue on issues of arms control & disarmament, nuclear non-proliferation, strategic stability and challenges associated with emerging technologies – in areas of high concern for Pakistan. 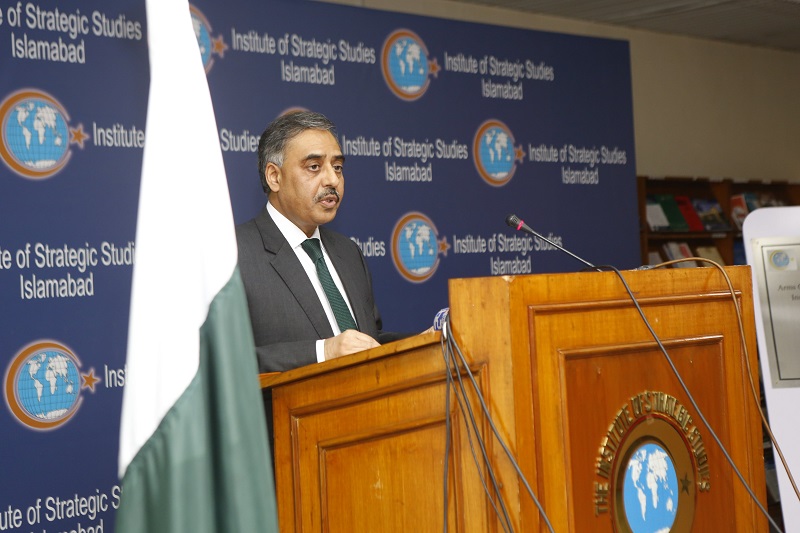 Following is the keynote address by the Foreign Secretary Sohail Mahmood at the Launch of Arms Control & Disarmament Centre (ACDC) in ISSI on October 30, 2019.


Members of the ISSI team,

I would like to thank the Institute of Strategic Studies for inviting me to the launch of the Arms Control & Disarmament Centre (ACDC). For informed and effective decision-making anywhere, a healthy link between policy practitioners and the academia is indispensable. Government machineries that benefit from rigorous academic input have richer choices for policy-formulation. I, therefore, express my deep appreciation to Ambassador Aizaz for this timely initiative.

The international security environment is in a state of flux, with profound and far-reaching changes underway. Strategic stability is being negatively affected at the global and regional levels. The long-standing and painfully negotiated arms control and non-proliferation agreements are unraveling. There is an ongoing erosion of multilateralism and growing polarization in the field of international security and disarmament. The concept of strategic stability is being challenged by newer notions like ‘strategic competition’ and ‘strategic dominance.’ It is important for our researchers to assess the full import of these developments and their potential impact, especially with regard to the security situation in South Asia.

Strategic stability in South Asia is being undermined due to significant developments in our neighbourhood. These include the massive build-up of nuclear and conventional forces by India, acquisition and introduction of new destabilizing capabilities, and nuclearization of the Indian Ocean. War-fighting capabilities have been demonstrated in Outer Space, thus threatening its sustainability. Anti-ballistic missiles have been introduced. There has been a constant increase in the readiness, sophistication and diversification of all types of delivery systems and platforms. The threshold of conflict has been lowered as a result of aggressive postures which seek to create space for war in a nuclearized context. The flawed notion of establishment of a ‘new normal’ and fantasies of ‘punishing Pakistan’ while remaining below the threshold of a nuclear conflict demonstrate irresponsible and reckless behaviour by a state which seeks to divert attention from its illegal occupation of Jammu and Kashmir and repression of the Kashmiri people.

The world saw a demonstration of this belligerent military posture earlier this year, when in the wake of the Pulwama incident in occupied Kashmir, there was an attempt to resort to aggression against Pakistan on a completely false pretence. While responding effectively in self-defence, Pakistan exhibited restraint and responsibility. However, it is not always possible to predict the trajectory of escalation in similar situations and Pakistan cannot be expected to one-sidedly pick up the burden for maintaining peace all the times.

The BJP government’s illegal and unilateral actions of 5 August 2019 to change the internationally-recognized disputed status of occupied Jammu and Kashmir and alter its demographic structure — in flagrant violation of the Security Council resolutions, UN Charter and bilateral agreements — have engendered further volatility in South Asia. The irresponsible statements made by senior members of the BJP government, including on nuclear issues and threats of dismemberment, leave little doubt about the reckless mind-set at work. They also illustrate the serious perils for peace that stem from the intersection of an extremist ideology and hegemonic ambitions.

The topmost priority of the government is socio-economic development and improving the lives of the people of Pakistan. This necessitates a conducive regional environment. Pakistan, therefore, desires peace and strategic stability in the region. Our desire for peace should not, however, be mistaken as a weakness. Let there be no doubt about Pakistan’s will and capability to defend itself against any kind of aggression.

Pakistan remains open to consideration of measures for crisis management, risk reduction, transparency and confidence-building. Peace and stability in South Asia cannot be achieved without resolving the core issue of Jammu and Kashmir in accordance with relevant UN Security Council resolutions; without agreeing on reciprocal measures for nuclear and missile restraint; and without instituting a balance between conventional forces. Our proposal for a Strategic Restraint Regime in South Asia, based on these three inter-locking elements, remains on the table.

At the global level, Pakistan continues to actively support and contribute towards non-proliferation instruments and arrangements. For medium and small-sized countries, the best guarantee for peace and stability and against any arbitrary actions by bigger powers, remains a strong non-discriminatory rule-based global order.  It is, therefore, in our interest to strengthen the non-proliferation regime. However, for the credibility of this regime it is essential to ensure even-handed approaches in terms of application of rules and access to dual-use technologies for peaceful uses. Discrimination and deviations from established non-proliferation standards, based on political and commercial considerations, should be done away with. We are witness to the negative impact of the 2008 India-specific NSG exemption for the non-proliferation regime as well as its repercussions for regional stability.

The objectives of arms control, disarmament and non-proliferation cannot be achieved in a vacuum. There is a need for reviewing and strengthening the UN mechanisms for the resolution of disputes, prevention of conflict, and collective security. The current paralysis of the UN disarmament machinery can only be addressed by creating the necessary conditions which ensure equal and undiminished security for all states. This is yet another aspect which demands further attention by the research community.

It is my hope that the Arms Control and Disarmament Center, as well as other think-tanks working in this area, will generate focused research and quality policy inputs through objective analyses on the pressing issues and the new challenges being faced by the international community in the area of arms control and disarmament. In particular, it is imperative for us to fully grasp the rapid developments in the areas of Artificial Intelligence, lethal autonomous weapon systems, cyber technologies, weaponization of space and their impact on modern warfare and deterrence stability. In this regard, we also have to focus on the need for evolving global normative instruments to regulate the use of new technologies as this is an essential part of disarmament and arms control diplomacy.

We also need to study how some of the military applications of emerging technologies might lead to restrictions on transfers of such technologies for genuine peaceful applications. Moreover, the global prevalence of some of the technologies would also entail a review of the existing export control regimes and the need for making them more inclusive. It will also require us to give a thought to new approaches towards risk reduction, transparency and confidence-building measures among states.

Finally, I would invite you to also analyze broader socio-political dimensions of the arms control and disarmament issues which include the role of leadership; its strategic vision for peace, development and security; national outlook and supremacist tendencies in a society; as well as the conduct of media in crisis situations. The motivation driving states to acquire military capabilities serve as a useful guide for the future trajectories of their arms control policies, doctrines and force postures.

As I conclude, I thank Ambassador Aizaz Chaudhary again for this initiative and hope that ACDC would make a valuable contribution to the policy discourse on vitally important issues of arms control and disarmament.