Monitoring Desk: The British journalist, Neil Watson indicates that the reason for the provocation on the borders of Azerbaijan and Armenia lies in the policies of Armenian Prime Minister Pashinyan who is a danger to regional peace because he is igniting a situation for his political face-saving after shameful defeat his country met under his leadership.

According to an article published in Ednews Baku, a British journalist indicates that there is a great deal of support amongst Armenians and the Armenian Diaspora for retaining Karabakh, particularly from those who supported the former Karabakhi leaders of the country. He has to be seen to have enabled a final struggle to take place. Pashinyan has done his best to be obstreperous and delay the inevitable as long as possible, particularly focusing on alleged concerns of the security of the Karabakhi Armenians, whose rights have been guaranteed by the Azerbaijani leadership on a repeated basis”. 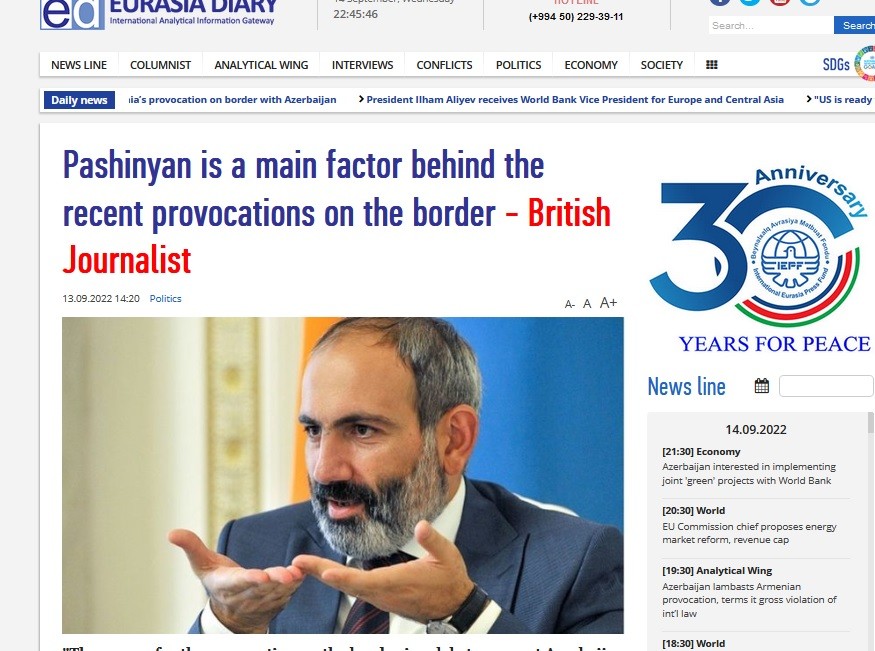 According to the British journalist, some external forces have been angered over the role of the mediation of the European Union in the organization of the recent meetings between President of Azerbaijan Ilham Aliyev and Armenian Prime Minister Nikol Pahinyan.

“We have to also mention the role of Russia.  The Russian leadership wants to maintain some degree of control in the South Caucasus. It had been pacified by having its peacekeepers on the border, following the November 2020 ceasefire. However, it seems their mandate will not be renewed by Azerbaijan after 2025. Russia is already allegedly building military bases in Armenia near the border. It has also been unhappy about the Brussels-brokered peace format, which has effectively replaced the OSCE Minsk Group and its own mediation efforts, partly as it could no longer be part of any peace process after launching an attack on Ukraine. In my view, there is no way that Armenia is launching these attacks on its own and it definitely has the support, either explicit or implicit, of its ally, Russia”.