Armenia must be recognized as a criminal and terrorist country, says Jabi Guliyev

OpinionArmenia must be recognized as a criminal and terrorist country, says Jabi...
Opinion
By Central Desk
September 18, 2022


On September 13, the large-scale provocations committed by the Armenian armed forces on 13th September 2022 in the directions of the Kalbajar, Lachin, Dashkasan, and Zangilan regions of Azerbaijan once again show the whole world that the official Yerevan does not give up its revanchist intentions.

Armenia did not completely withdraw its armed forces from the territory of Azerbaijan by grossly violating the provisions of the tripartite statement and the agreements reached.

At the same time, Armenia continued to mine the territories of Azerbaijan, placed heavy equipment and various types of weapons in the region, and shelled our positions along the border.

After the successful combat operation carried out by Azerbaijani Army, an adequate response was given to Armenia and the firing points of the enemy were silenced. I must mention with great regret that some anti-national elements are trying to overshadow the successful military operation conducted by our army. Of course, Azerbaijani people see the reality. The people united with the Supreme Commander-in-Chief of Azerbaijan Armed Forces, President Ilham Aliyev and unequivocally support these operations.

It is not in the interests of destructive forces to maintain stability, sustainable development and a healthy dialogue environment in the region. For many years, the territory of Armenia has been used to create tension in the region. The ordinary Armenian people have been victims of such policy for centuries, and it is Armenia that as a result of this policy has become a failed state of the modern international relations system. Armenia should be recognized as a war criminal country in the world. The provocations that took place on September 13 raise once again the issue of not handing over the mine maps to Azerbaijan by the official Yerevan. While not providing maps facilitates the military attacks of Armenia, on the contrary, it fundamentally complicates the defense organization of Azerbaijan.

Armenia must be recognized as a terrorist country at the same time, as the presence of buried mines in the liberated territories causes the death of the Azerbaijani civilian population. The world community and international organizations must condemn Armenia for not providing mine maps, and official Yerevan must be held legally responsible for this inhuman acts.

For this reason, the national solidarity environment in our country should be preserved as a strategic resource. Despite all the smear campaigns, as in the 44-day Patriotic War, our people are still united with the Supreme Commander-in-Chief. Those who accuse Azerbaijan should not forget that our country achieves all its strategic goals under the leadership of the Supreme Commander-in-Chief, and unity will lead us to new victories.

On 27th June 2022, the speech made by President Ilham Aliyev at the opening ceremony of the commando military unit in Kalbajar district that “Today, the power factor is at the forefront in the present-day world the norms and principles of international law do not work” expresses the reality of the modern era. Thus, the incident that happened on September 13 once again shows that the steps taken by President Ilham Aliyev in the direction of army building are of exceptional importance. Of course, battles and war have unwritten laws. Our servicemen protect every inch of Motherland at the cost of their lives. Azerbaijani Army, which dealt an unwavering blow to the enemy in the last military operations, destroyed hundreds of Armenian soldiers. Unfortunately, 79 servicemen of our army were martyred in these battles.

I express my sincerest condolences to the families and relatives of our Martyrs and wish recovery to the wounded. 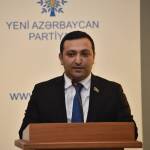 Note: The writer Jabi Guliyev is a Member of Azerbaijan’s Milli Majlis, Executive Director of the Youth Fund of the Nakhchivan Autonomous Republic of Azerbaijan.