ISLAMABAD, Pakistan: The Ambassador of the Republic of Azerbaijan to Pakistan Ali Alizada has said that we are a peaceful nation and do not want war but the Armenian armed forces continue to target the civilian population in a blatant violation of international humanitarian law.

Responding to questions at a Press Conference organized by the Embassy of the Republic of Azerbaijan to Pakistan in Islamabad on Thursday on the latest situation of “Armenian military aggression and attacks against Azerbaijan”, the ambassador said that as of October 7, in total 28 civilians including children and elderly had been killed and 144 civilians had been hospitalized with various injuries as a consequence of heavy artillery shelling by the Armenian armed forces. 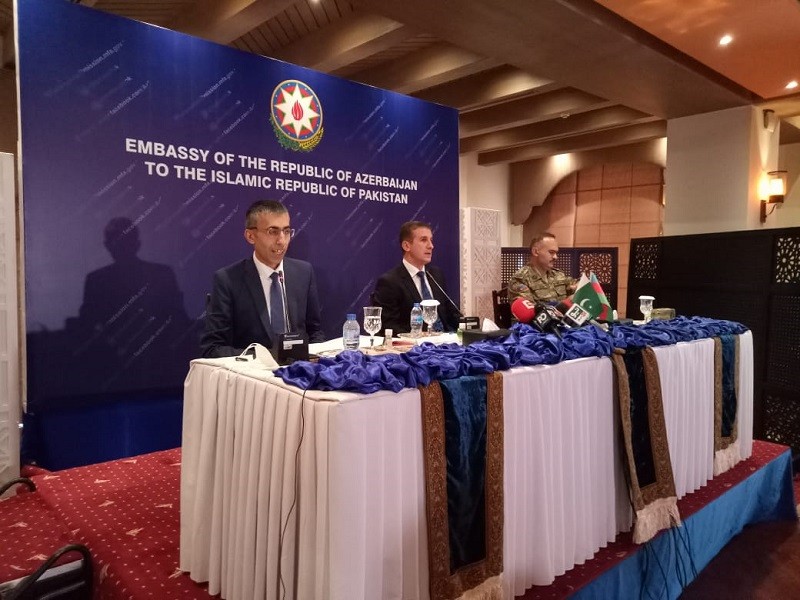 Ambassador Ali Alizada said that civilian facilities such as houses, hospitals, medical centers, school buildings, kindergartens as well as graveyards have been subjected to indiscriminate shelling of armed forces of Armenia.

The ambassador said that we are fighting in our legitimate territory which had been occupied by the aggressor Armenia, and we demand an unconditional withdrawal of the Armenian army from our occupied territory.

“We want the implementation of United Nations resolutions which clearly say that Armenia is occupying the Azeri land,” he said.

Ambassador Ali Alizada said that Armenia always avoids to resolve the issues through negotiations and makes endeavors to sabotage any attempt to it.

“Armenia is not interested to resolve the conflict and avoiding negotiations,” he lamented.

Expressing gratitude to Pakistan for its unflinching support to Azerbaijan, the ambassador also mentioned the Armenian propaganda that Pakistani army is fighting alongside Azerbaijani forces against Armenia over the Nagorno-Karabakh.

The ambassador termed it a baseless propaganda and an attempt of Armenia to divert the attention from its aggression and debacle in the battle.

Earlier apprising the participants on the recent situation, the Defence Attaché of Azerbaijan Armed Forces to Pakistan Colonel Mehman Novruzov told that Armenia is using Kurdish fighters against Azerbaijan.

However, he added that Azerbaijan has seized very important heights and recaptured its many areas previously occupied by Armenia.

The Defence Attaché said that Azerbaijan has recovered 25 occupied villages from Armenia while more than 250 Armenian soldiers including officers have surrendered.

Colonel Mehman Novruzov further said that that a baseless propaganda is being hatched that Pakistan and Turkey are physically involved in the Azerbaijan-Armenia war. He said that both these Countries are our brothers and supporting us diplomatically and morally.

Prior to him, the Second Secretary and Deputy Head of Mission (DHM) of the Embassy of Azerbaijan Mr. Samir Guliyev delivered the introductory remarks.

The following is the official statement released by the Azerbaijan Embassy Islamabad about the above mentioned Press Conference;

o          as if, Turkish troops are involved and Turkish F-16 take part in the ongoing military operations, which has no grounds and evidence.

o          as if, Syrian terrorists are brought into Karabakh to participate in the operations.

Azerbaijan has repeatedly denied these accusations and stated that these are nothing more than fake information. Azerbaijan has 10 million population and Army with about 100 thousand manpower, which is sufficient number to fight a war with Armenian Forces, which is far less in number.

Mati
Mati-Ullah is the Online Editor For DND. He is the real man to handle the team around the Country and get news from them and provide to you instantly.
Share
Facebook
Twitter
Pinterest
WhatsApp
Previous articlePakistan has around 47% of children population: Riaz Fatyana
Next articleBundle Island project to generate investment and job opportunities: PM Imran Khan