In modern world, the Communication is defined as the process of sharing ideas, information and messages with others.

The above-mentioned principles are basic or foundation of Communication and many of us may think modern research and knowledge have shaped Communication science as it is today. However, things are otherwise if we ever look into the history of Classical Philosophy.

Classical philosophical thoughts of Socrates, Plato and Aristotle are directly or indirectly influenced and linked with each other although Aristotle used reversed composition that was used by his teacher —Plato. Since work of Aristotle is better documented and covered shades of his predecessors, Communication Philosophy of Aristotle provides us foundations and fundamentals of new Communication science.

In Classical Philosophy, there is the purest and simplest foundation of Communication verbally working out one’s own thoughts may allow someone to pick at certain parts, to assist or even to challenge. Talking and debating (dialogue) were main tools of transferring messages by Greek philosophers.

These dialogues were not with pre-fixed judgments. The process of dialogue was talking openly, feed off one another and to get some incredible ideas. However, today’s Communication is investment in the defense or deconstruction of whatever side we have taken, or are critiquing.

Let’s have a look on Aristotle’s methodology of Communication which was different from Plato. While Plato adopted the philosophical method in his approach to politics, Aristotle followed the scientific and analytical methodology. Plato’s style is almost poetic whereas that of Aristotle, prose-like.

Aristotle’s method of study is, at the same time, historical, comparative, inductive, and observational, systematic and analytical.

Aristotle did not accept anything except which he found was proven empirically and scientifically.

Plato argued with conclusions that were pre-conceived while Aristotle, in a scientific way got at his conclusions through logic and analysis through Data Collection. Empiricism was Aristotle’s merit and his conception of systematic knowledge is rationalistic.

Before discussing Aristotle Model of Communication, one should have basic knowledge of major components and features of Aristotle’s methodology he used to formulate his dialogue because these features provide a solid, logical, clear and successful Communication Base.

Brief of Aristotelian Thought Building is as follows:

Aristotle is considered as the father of historical and comparative methods of studying social and political phenomena. Considering history as a key to all the secrets, Aristotle takes recourse in the past to understand the present. The fact is that all his studies are based on his historical analysis: the nature of the causes and description of revolution, which Aristotle takes up in the Politics, have been dealt with historically.

Aristotle also follows the comparative method of study both intensively and extensively. His classification of states together with the consequent cycle of change is based on his intensive study of 158 constitutions of his times. Through comparative analysis he speaks about the ‘pure’ and ‘perverted’ forms of states.

Aristotle pursued teleological and analogical methods of analysing and investigating social and political phenomena. His approach is teleological using the model of craftsmanship. Aristotle insists that nature Works, like an artist and in the process it seeks to attain the object for which, it exists.

Nature, Aristotle used to say, did nothing without a purpose man lives in society to attain his development while state helps man to achieve his end.

Teleology has two parts. Telos, ‘end’, ‘aim’, or ‘goal,’ and logos, ‘explanation’ or ‘reason’) or finality is a reason or explanation for something as a function of its end, purpose, or goal, as opposed to as a function of, say, its cause.

Natural teleology, common in classical philosophy, contends that natural entities also have intrinsic purposes, irrespective of human use or opinion.

In the late 18th century, Immanuel Kant used the concept of telos as a regulative principle in his Critique of Judgment. Teleology was also fundamental to the philosophy of Karl Marx and G. W. F. Hegel.

Analogical method is a comparison between two objects, or systems of objects, that highlights respects in which they are thought to be similar. Analogical reasoning is any type of thinking that relies upon an analogy. An analogical argument is an explicit representation of a form of analogical reasoning that cites accepted similarities between two systems to support the conclusion that some further similarity exists.

Aristotle’s methodology was both analytical as well as observational. In his whole thought-process, he observed more than he thought; all his studies were based on data and facts, which came under his keen observation. Through study, experiments and observation, Aristotle analysed things and, therefore, reached conclusions.

After having a brief understanding with Aristotle’s methodology and thought processing, one can easily understand his Model of Communication.

Aristotle Model is mainly focused on speaker and the speech. It can be broadly divided into five primary elements: Speaker, Speech, Occasion, Audience and Effect.

The Aristotle’s communication model is a speaker centered model as the speaker has the most important role in it and is the only one active. It is the speaker’s role to deliver a speech to the audience. The role of the audience is passive, influenced by the speech. This makes the communication process one way, from speaker to receiver.

The speaker must organize the speech beforehand, according to the target audience and situation (occasion). The speech must be prepared so that the audience be persuaded or influenced from the speech. Even in 21st century, heads of states read out their statements/speeches transmitted by electronic media and receivers (listeners/viewers) have no opportunity to stop them/questions them or interact with them.

Aristotle believes “Rhetoric” one of the most important component of communication and persuasion and different message or speech should be made for different audiences at different situations to get desired effects or to establish a propaganda. This model is highly used to develop public speaking skills and create a propaganda. Therefore, one can say Aristotle is also father of propaganda. Rhetoric has been used widely for defaming anybody, tagging him corrupt, cheater, sinner for achieving political goals.

Aristotle says that the speech must be clear as well as the speaker must have a very good non-verbal communication with the audience like eye contact. This example is a classic case of Aristotle Model of Communication depicting all the elements in the model. Non-verbal or para-verbal communication covers how do we deliver or message, tone of voice, modulation, pauses, rhythm etc.

Critical Elements of a Good Communicator 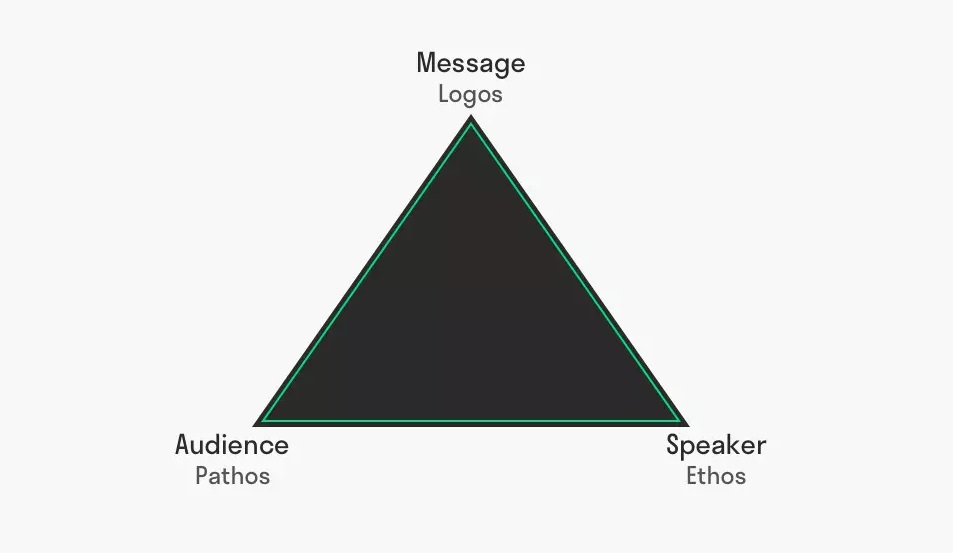 Aristotle Model of Communication further designs three core elements that must be present in a good communicator or public speaker. These elements are related to each other and they reinforce the other elements.

Ethos is the characteristic which makes you credible in front of the audience. If there is no credibility, the audience will not believe in you and will not be persuaded by you. Expertise and positions also give credibility to a person. For instance, the mass will not listen to the promises of a corrupt politician, but if a politician is known for his good deeds, there’s a high change his speech will be heard.

If what you say matters to them and they can connect with it, then they will be more interested and they will think you are more credible. Emotional bonds will make the audience captivated and they feel the speaker is one of their own people.

For instance, if people of a village needs water and the politician tells them that he will help in building roads, the people will not get influenced but might be more influenced if he says he’ll build a dam for drinking water and irrigation.

Logos is logic. People believe in you only if they understand what you are trying to say. People find logic in everything. If there is no logic behind the speaker’s work or time, they do not want to get involved. Everybody has a sense of reason. You must present facts to the audience for them to believe in you.

For example, a presenter using factual data in an awareness program will attract the audience’s attention and will make them believe in the need of awareness in the particular matter.

Here one point is important to note that teacher of Aristotle, Plato provide us the fourth element that Kairos.

Kairos is a passing instant when an opening appears which must be driven through with force if success is to be achieved” – Kairos is all about timing. Finding the right moment to deliver message can amplify its resonance greatly. Ensuring your stories aren’t outdated or clashing with competing messages is good health check.