ISLAMABAD, Pakistan: Dr Arif Alvi has been elected as Pakistan’s 13th President on Tuesday after he received 352 votes in the Electoral College formed to elect among three Candidates the new Head of the State for a five-year term.

Dr Arif Alvi will replace Mamnoon Hussain whose five-year term as the president will expire on September 8.

Dr Arif Alvi will take the Oath as the President of Pakistan on September 9, 2018.

In the Presidential Election, held simultaneously today at the Parliament House (Senate and National Assembly) and the four Provincial Assemblies via a secret ballot, the Chief of Muttahida Majlis-e-Amal (MMA) Maulana Fazlur Rehman who had been enjoying the support of Pakistan Muslim League-Nawaz (PML-N) bagged 184 electoral votes while Pakistan People’s Party’s (PPP) Aitzaz Ahsan took 124 votes.

It is worth mentioning that the Electoral College for the Presidential Election consisted of the Senate, National Assembly, Punjab Assembly, Sindh Assembly, Khyber Pakhtunkhwa Assembly and Balochistan Assembly. 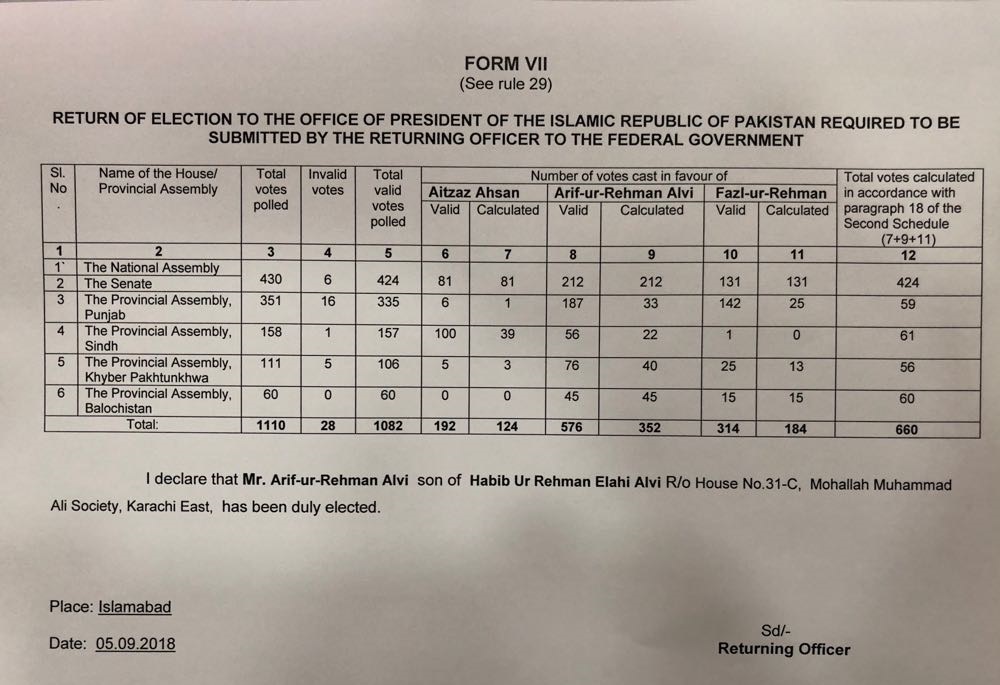 The PTI’s Arif Alvi upheld his National Assembly membership after he won the general elections 2018 from NA-247 (Karachi South-II). Previously, he was also the member of the National Assembly from June 2013 to May 2018.

Born in Karachi on July 29, 1949, Arif Alvi began his political career from the platform of Jamaat-e-Islami (JI) as his father Habib Ur Rehman Illahi Alvi was also a JI’s member.

Dr Arif Alvi was one of the founding members of PTI. In 1996, he became member of the PTI Central Executive Council for a year, and in 1997, he became the President of PTI Sindh.

Arif Alvi was elected to the National Assembly from NA-250 (Karachi-XII) Constituency in general elections 2013 for the first time. In 2016, he was made the President of PTI Sindh Chapter.

By profession, Arif Alvi is a dentist, and has served as the President of the Asia-Pacific Dental Federation and of the Pakistan Dental Association.

Mati
Mati-Ullah is the Online Editor For DND. He is the real man to handle the team around the Country and get news from them and provide to you instantly.
Share
Facebook
Twitter
Pinterest
WhatsApp
Previous articlePCB announces 16-member Pakistan Squad for Asia Cup 2018
Next articlePM Imran seeks Pak-Japan stronger trade, investment cooperation