Being aware of the migratory transition which now makes Morocco a host Country alongside its perpetual status as a land of transit given its geographical position as a link between Africa and Europe, APSOPAD International, a nonprofit humanitarian NGO based in Tangier (Morocco), has engaged within the framework of its APSOPAD School, a socio-economic integration program for the benefit of 100 sub-Saharan migrants residing in the city of Tangier.

The aim of the initiative is to support the dynamics of migratory flows which succeeded in the new Moroccan migration policy implemented through the national immigration and asylum strategy launched in 2013.

The first phase of this program, lasting around 5 months, consisted in offering beneficiaries who came from 11 different African countries and of which more than 60% are women, intensive training in Darija Language (Moroccan local language) in addition to training in sales techniques after which 50 most deserving participants obtained a certificate of skills in the management of income-generating micro-activities during a ceremony organized on December 20, 2019 in Tangier ”APSOPAD Graduation Ceremony”. 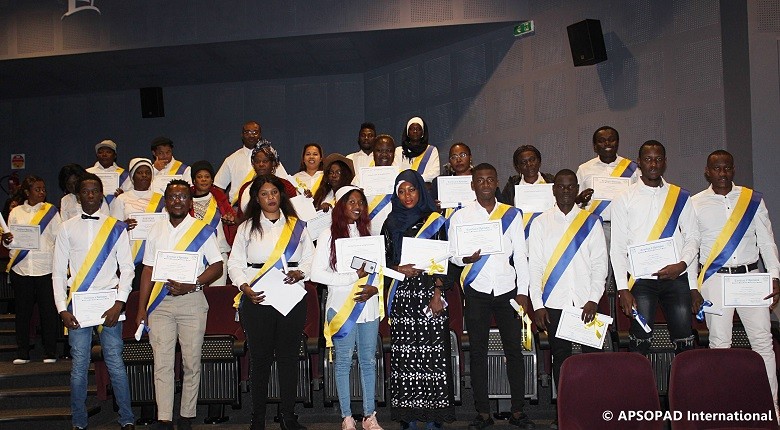 The selection of the winning recipients was made on the basis of the attendance rate during the courses since the NGO advocates quality and rigor in its activities and in particular its training programs.

The second phase of the program includes the launch of a multi-business community store in the city of Tangier.

Beyond the originality of the idea which is essentially based on the African nature of the goods and services offered, its particularity lies in the style of community management implemented as well as the quality standards envisaged by APSOPAD and this according to international standards in the matter.

To this end, the NGO aspires to promote the project in all its phases and more particularly after its effective inauguration by developing the notoriety and the brand image of the store.

In this regard, the CEO of APSOPAD International, Professor Ahmed Iraqi, reminded during the ceremony, to the future traders and co-managers of the project, that communities of sub-Saharan migrants have already successfully bet on socio-economic integration in the kingdom, like the shops and beauty centers open and managed by sub-Saharan roommates at the Commercial Center of the Twin center in Casablanca.

In the same vein, Professor Iraqi emphasized the value of solidarity as a pivot for the success of any community project.

Mati
Mati-Ullah is the Online Editor For DND. He is the real man to handle the team around the Country and get news from them and provide to you instantly.
Share
Facebook
Twitter
Pinterest
WhatsApp
Previous articleDelhi Riots: Delhi Minorities Commission Fact-Finding Report releases
Next articleIran’s inclusion in CPEC to be beneficial for all regional Countries: Pakistan FM