ISLAMABAD, Pakistan: Employees of Associated Press of Pakistan (APP) on Friday demonstrated a token protest against non-resolution of their demands in front of Press Information Department (PID) in Islamabad. 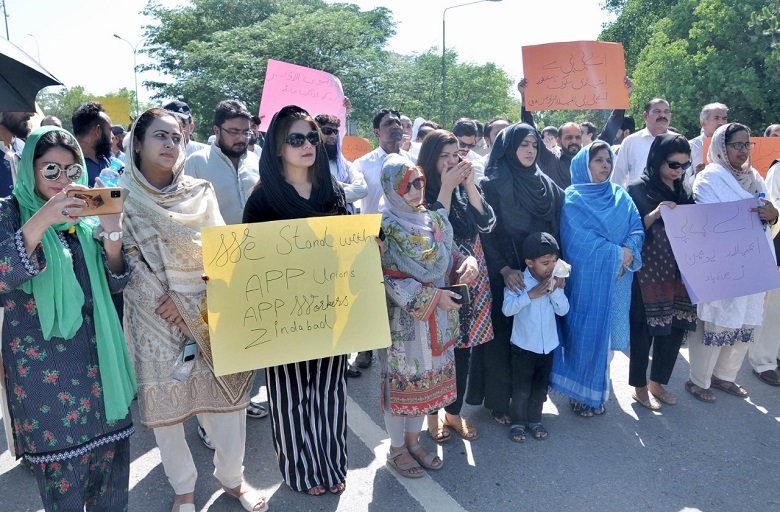 Speaking on the occasion, President APP Employees Union Shezad Ali Akbad said that negligence of APP management regarding implementation of 40 % disparity allowance was a deplorable act of the management which deprived hundreds of families of their livelihood. He strongly condemned the behavior of APP Management, showing disinterest and arrogance towards union and its demands.

“Recent price hike of petroleum products and resulting inflation have created immense problems for employees, there are pending issues such as 40% disparity allowance, regularization of contract employees, up-gradation of salaries, ete,” he stated.

He categorically expressed that if demands of APP Employees are not met adequately; they would be forced to launch their agitation in front of Parliament House on coming Tuesday and would only call off the protest following assurance that their concerns would be addressed.

Secretary General Nadeem Iqbal in his speech expressed that APP management must fulfill the demands of employees of APP on urgent basis.

40% disparity allowance, regularization of contractual employees and increase in their salaries, etc are some major issues, APP Employees are facing since long time and by showing stubbornness on settling issues with Union, APP Management have compelled APP union to register their agitation in front of Press Information Department on Friday, he further added.

All the employees of the organisation were present on the occasion and chanted slogans for their rights.

APP Employees Union (CBA) has been continuously protesting from days for the implementation of 40% disparity allowance, BPS and other pending issues such as regularization of contractual employees and up gradation of salaries.

Mati
Mati-Ullah is the Online Editor For DND. He is the real man to handle the team around the Country and get news from them and provide to you instantly.
Share
Facebook
Twitter
Pinterest
WhatsApp
Previous articleMushaal lauds UK MPs, MAPIM for raising voice against Yasin Malik’s unfair trail
Next articleNation is proud of Pakistan armed forces: PM