Islamabad, Pakistan: A book covering the history of European Theatre from the Greek period to the 20th Century has been published.

The title of the book is “An Introduction to European Theater—-History of Performing Arts from Greek Period to 20th Century” has been published.

The author of the book Shazia Anwer Cheema is a Prague-based columnist, writer, and foreign affairs expert who writes for national and international media. Shazia Anwer did her M.Phil.  in Cognitive Semiotics from Aarhus University Denmark and is currently registered as a Ph.D. Scholar of Semiotics and Philosophy of Communication at Charles University Prague. 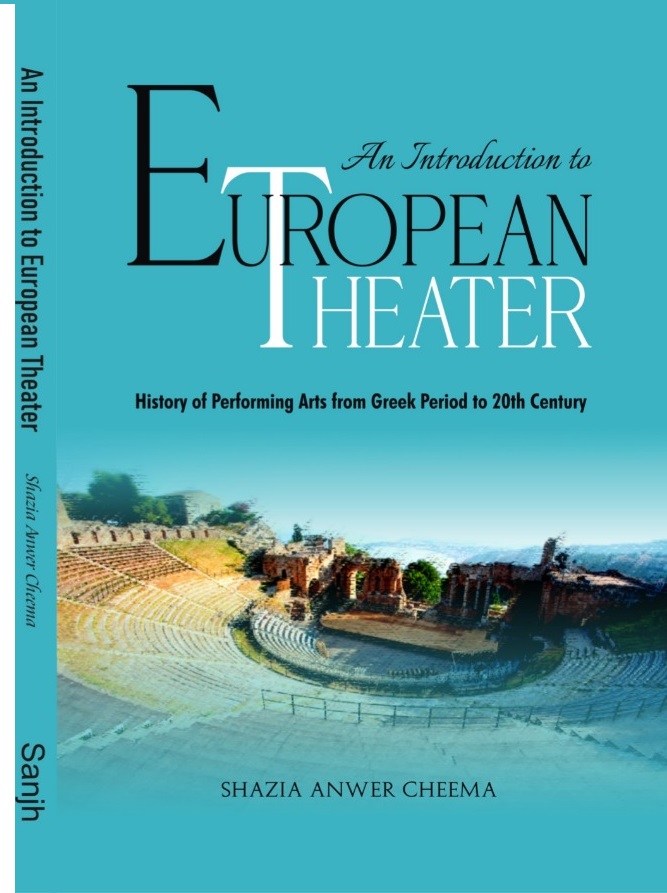 “An Introduction to European Theater—-History of Performing Arts from Greek Period to 20th Century” covers the journey of visual and performing Arts as well as philosophical movements spreading over 2500 years. Art is always a mirror of the time giving the absolute justification for the idea that any art form cannot be understood in a vacuum. Artistic work is an organic process that comes into existence with the help of certain binary forces such as politics, economics, and social fabrics of that time. First in the shape of an idea then it transforms into philosophy and later it gets executed into artistic forms/genres. Sometimes a philosophy provides nurturing ground for artistic genres and other times artistic experimentation creates a philosophical sphere. In both ways, history, politics, and sociology cannot be filtered out from art. To understand, visual, performing, and literary art, the reader’s trajectory must be a social, and political history of art and artist. So, any book that is written on visual art, performing art, and literary art is equally a book on history, philosophy, and politics thus must be useful for historians, philosophy students, and students of politics (International Relations, Public Diplomacy, Cultural Diplomacy). 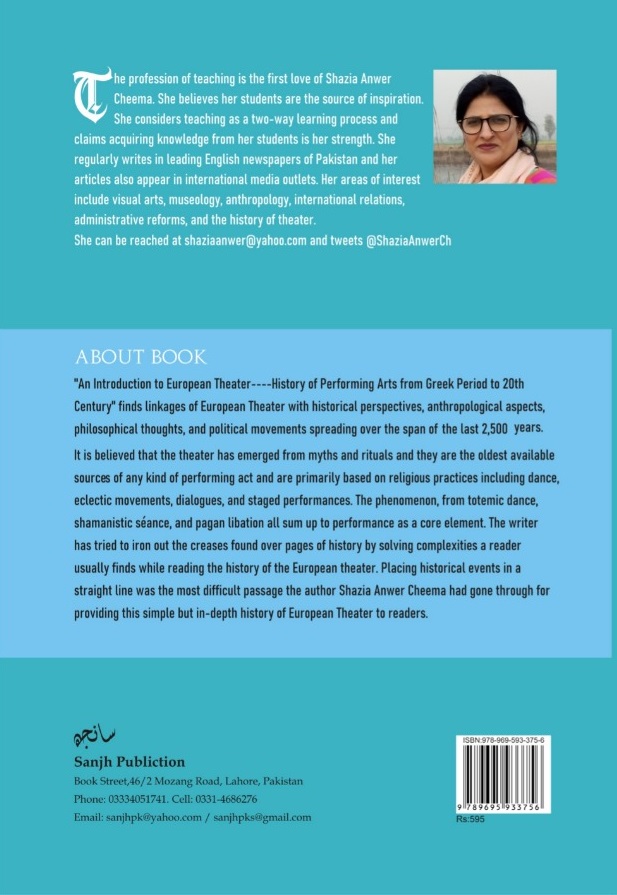 When asked why did she decide to write this book, the author of the book Shazia Anwer Cheema was explained that while doing her Ph.D. in Semiotics and Philosophy of Communication and when she started researching about theater as an art form, especially European Theatre she came across an overwhelming number of books on almost all aspects of European Theater, alarmingly all books were written by experts for the experts, however, a regular reader, as well as students, could hardly get any substantiative information from these books.

She believes that books spanning from Greek theater to contemporary theater are neither written in proper chronological order nor provide any direct link from point A to B. For instance, one piece of information can be found on page number 11 but it is directly linked with the information provided on page number 111. For a novice, it is nearly impossible to keep the thread and make any sense out of it.

“I dare to enter the labyrinth of fragmented history confused with politics, overlapping with socioeconomics, claustrophobic by the amount of provided information. I figure out one simple rule to find my way out, clutching history, politics, and philosophy in one hand and thread of chronology in another hand. I move from one point to the next as a historian and try to link performing art with its time. The organic process of evolution was a key factor throughout my journey. That’s why this book is not just about theater history or theater production; as I have claimed earlier art cannot be understood and explained in a vacuum, the theater is a carrier, in this case, carrying the past with it,” added author Shazia Anwer Cheema.

When asked how could be her book useful for readers, she stated that everyday readers would not find the book laborious hence can quench his/her esthetic thirst also students and researchers would find it useful for clarity of form and content. For instance, it has sociopolitical movements of the twentieth-century tracing back its origin into the politics of antiquity. When did humanity feel suppressed and get the idea of revolt which gave birth to the theatre of revolt, how did the proscenium arch and concept of the fourth wall in the theater change the course of history plus the history of performing art.?  Why feminism is still an undercooked theory and Queer has become a phenomenon?