Amin Rehman is a multidisciplinary visual artist who has been working since the 1980s and currently resides in Toronto. Originally from Lahore, Pakistan, he studied at the historic National College of Arts (NCA) Lahore and received a Masters from the University of Windsor, Ontario in 2011.

He is eldest son of legendary miniature painter Ustad Bashir ud Din who dedicated his whole life to Art of Miniature Paintings and to NCA where he had been a student when NCA was Mayo School of Arts and then he had been teaching in NCA till his retirement. Amin is grandson of Mualana Hafizur Rehman Paisa Akhbari who had been inspiration for young archeologists, curators and linguistic experts of subcontinent for over half a century. Hafizur Rehman was awarded Presidential Award for his services.


Rehman’s work engages and comments on the current effects of aggressive globalization, colonization and decolonization and also encompasses a number of artist practices such as digital installation, painting, video and neon. 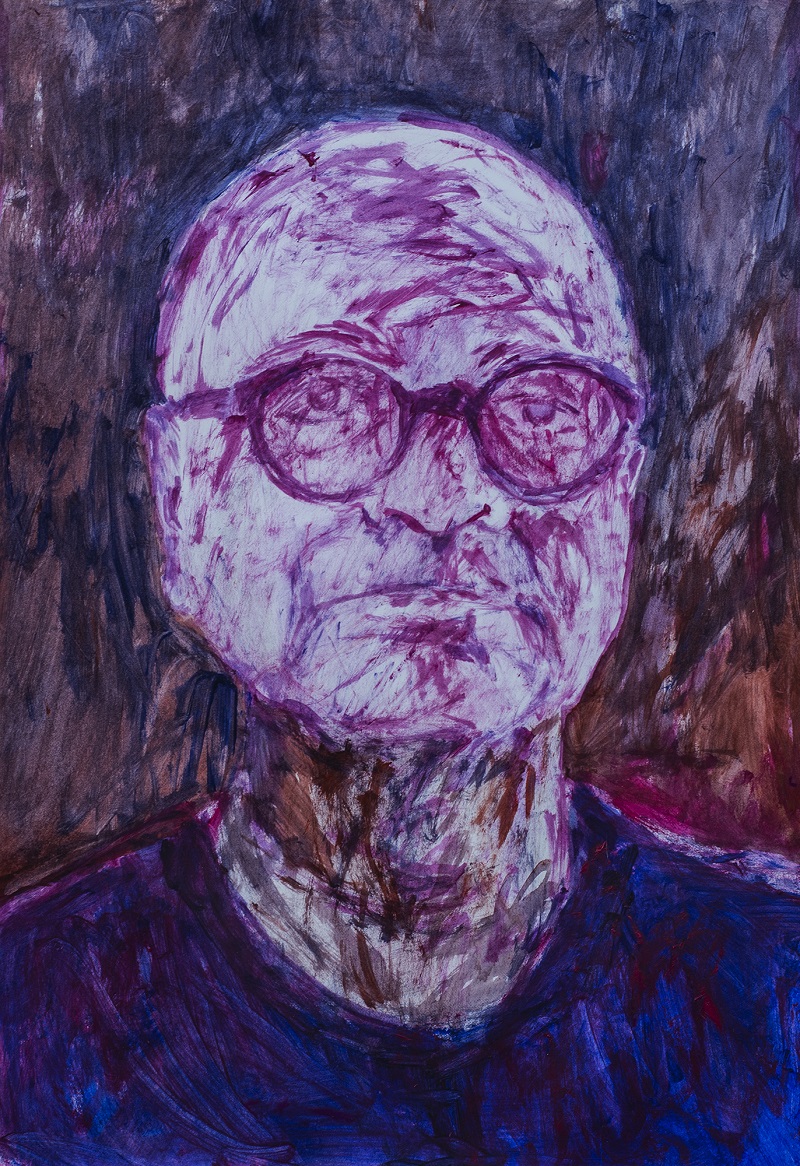 Rehman has exhibited extensively in a number of exhibitions across Canada, notably Other Histories at the Saint Mary’s University Art Gallery (2008); A is for… at the McIntosh Gallery at the University of Western Ontario (2012) and White Wash at the Art Gallery of Mississauga (2011). Rehman received the Canada Council for the Arts Project Grants to Visual Artists in 2014, 2017 and 2021. He was the recipient of the Chalmers Fellowship Award from the Ontario Arts Council in 2008 and 2017. His upcoming exhibition the Bleeding Borders will be exhibited at Art Gallery of Grande Prairie, Alberta, Canada.

Currently, his digital installation “Other Histories”, a collaborative project with Tariq Ali, is on view at the South Asia Institute Chicago, USA till May 15. This work is based on the current and historical print media and relies on his past interest in the power of language and textual expression to alter personal ideologies through language translation. The installation is deep-rooted in rhizomatic thoughts and diaspora identity that serves as the pictorial content and interests in the phraseology of aggressive globalization, colonization and decolonization. The work is suggestive of graphic and informational strategies reused in American Pop Art in the 1960’s. 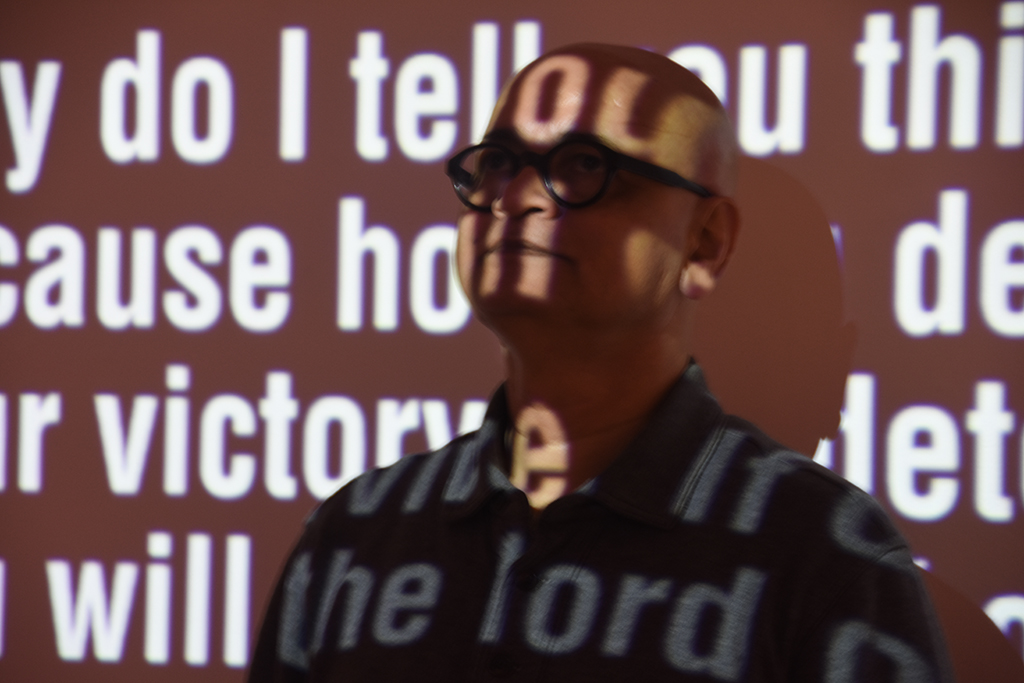 DND Thought Center contacted Amin in Toronto for exclusive interview that is hereunder:

Could you name a couple of your previous projects?

My previous series “White Wash”, was exhibited at the Art Gallery of Mississauga, Ontario, Canada in 2011 which examines the relationship between media-perpetuated messages, the phrasing of language and the language of peace negotiations. “White Wash” looks into the media’s coverage of the post-9/11political events of Pakistan, where the Taliban gained control over parts of the country after it had been abandoned by the USA. Specifically, how these events had affected and are affecting the regional and international peace in the Afghanistan/Pakistan region.

My other series “Loha Toar, Loha Khoar” which was exhibited at the VM Gallery, Karachi, Pakistan offered a strong commentary on exploitation of cheap labour in parts of South Asia for ship breaking and hazardous wastes – including PCBs, asbestos, lead and oil. For the workers in developing nations the opportunity to work in the ship breaking yard often means the only chance at survival. And yet for the workers and their environment, breaking old ships can have deadly consequences. This work speaks to current environmental issues around the globe and especially in the South Asian region, which is being developed as a new centre of world business. My recent work utilizes the graphic and informational qualities of print media and Pop Art, combining it with South Asian references.

Previously you have also worked in Encaustic medium. Since how long have you been working in Encaustic? What do you find most interesting about working in this medium?

In 1989, I was visiting Zahoor ul Akhlaq at the School of Sacred Music, Yale University where I came across an encaustic painting workshop taking place. The luminosity of the encaustic medium seemed similar to the ‘wash painting water colour technique’, which I had seen all my childhood being utilized by my father, Ustad Bashir ud Din, in his paintings. I had also used the ‘wash water colour technique’ for my series “From Images to Images – A New Look at Power and Glory” based on the Victoria and Albert Museum’s 18th century Mughal miniature collection during my internship at the V&A in England in 1987. Since 1990, I have been continually working in the encaustic medium.

What is your connection with words?

I always had an interest in looking at my father’s miniature books which had a lot of Kufic, Sulus and Nastaleque calligraphy in miniature paintings. Then, if you have been brought up in Lahore, Pakistan, you cannot escape 16th century Wazir Khan mosque’s calligraphy and inlay work. But I have never used calligraphic text in my work until 9/11. 9/11 changed my formal way of painting issue-based work, which I had been painting since the early 80’s. Initially, in my early ‘conflict’ based installations like Peace Taxi (Toronto, 2002), Creative Insecurity (Toronto, 2004), Black Holes (University of Technology Gallery, Sydney, 2007) and India Bazaar exhibition, I was using Arial and American Type writer fonts to convey the messages. The use Arabic like writing styles was based on my research from the “White Wash” series. So, my work uses Arabic/Urdu or Persian looking fonts to make identity statements rather than making calligraphic decorative expressions.

How do you keep a fine balance between making your work thought provoking and politically charged and seen as activism?

Like activism, my content is very much ‘up-in-your-face’ but my every day studio practice has allowed me to keep a fine balance between politically charged content and maintain my artistry. I feel, when working on provoking and politically charged issues there is a danger of being lost in the currents of the sentiments of the content. As an artist you need to know how to manipulate the content so that the creative elements are not overwhelmed by the strong activism.

How would you describe your studio practice?

My main body of work has evolved in this country but the content was always issued based and that comes from the early years of my art practice from Lahore. My first exhibition in Canada was “Working Bodies” (Idee Gallery, Toronto, 1991), on the sex-workers of Sherbourne Street area, “Body Expressions” (Gallery 306, Toronto, 1996) on Church Street community issues, “Black Holes” (University of Technology Gallery, Sydney, Australia, 2007) on the Iraq War, “Loha Toar” (VM Gallery, Karachi, Pakistan) on Ship breaking issues in South-Asian Countries, “White Wash” (Art Gallery of Mississauga, 2011), on the stories and war logs of the victims and survivors of the violence of the Afghanistan-Pakistan Border region, to name a few.

Which Pakistani artist do you admire most and why? Who has had the greatest influence on your art practice?

I like lots of artists for different reasons. My father, Ustad Bashir ud din is undoubtedly my greatest influence as an artist. His support and guidance in teaching me the core techniques and aesthetics, which are vital to be able to get the ideas and contents you want out into their physical forms has been invaluable. Then Khalid Iqbal and Zahoor ul Akhlaq were my early influences as both artists and teachers. Among text-based artists, Jenny Holzer, Lawrence Weiner and Jamelie Hassan’s work is very interesting.

What are your future plans? Any exhibition is coming up soon?

My next project is the “Bleeding Borders” which looks into the communities living along the porous borderlands of Pakistan (with India, Iran and Afghanistan), Iran (with Afghanistan, Pakistan) and Turkey (with Syria, Iran), as these areas have been associated for exporting terrorism regionally and internationally. In 2018-19, I travelled to region’s border areas to document the current political turmoil surrounding, extremism, ethnic violence, and poverty. These visual and lexical artifacts collected through my research inform the content of works created in this project. The first exhibition from this project is schedule for showing at the Art Gallery of Grande Prairie, Alberta, Canada this December and the exhibition has been curated by Manar Abo Touk.