BRUSSELS, Belgium: Pakistan’s Ambassador-designate to Belgium and Luxembourg Zaheer Aslam Janjua presented his credentials for the European Union (EU) and European Atomic Energy Community to the President of European Council Donald Tusk in Brussels on Wednesday.

The European Council President Donald Tusk reciprocated and extended best wishes for the welfare and prosperity of the people of Pakistan. 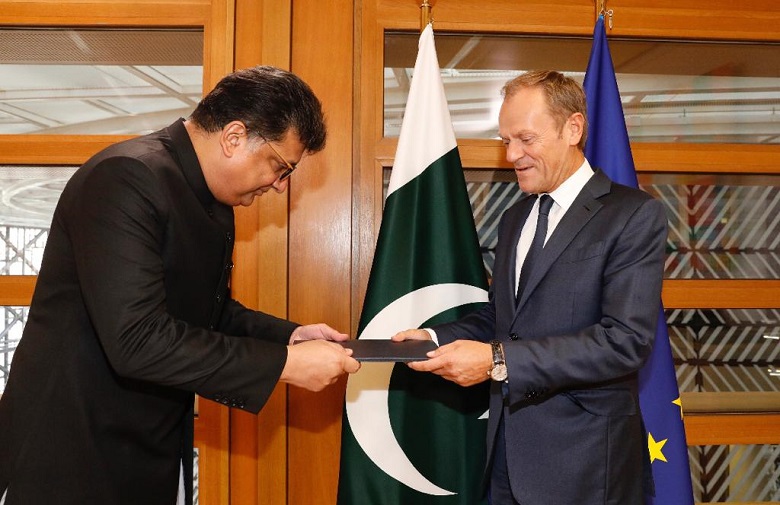 Meanwhile, in his meeting with President Donald Tusk, Ambassador Zaheer Aslam Janjua stated that “Pakistan highly values its relationship with the European Union and considered it a strategic partner”.

Zaheer Aslam Janjua added that bilateral relationship between the two Countries will further strengthen under the framework of all-encompassing Pakistan-EU Strategic Engagement Plan.

The ambassador also briefed the European Council president on the deteriorating human rights and humanitarian situation in Indian Occupied Jammu and Kashmir (IOJ&K).

Janjua urged the EU to take a strong position and impress upon Indian to improve the situation in IOJ&K. The threats to regional peace and stability posed by Indian actions were also highlighted.

The developments related to the Afghan Peace Process were also discussed.

Mati
Mati-Ullah is the Online Editor For DND. He is the real man to handle the team around the Country and get news from them and provide to you instantly.
Share
Facebook
Twitter
Pinterest
WhatsApp
Previous articlePakistan and China reaffirm resolve to further strengthen their Strategic Cooperative Partnership
Next articlePakistan and India to sign Kartarpur agreement tomorrow