PESHAWAR, Pakistan: The US Ambassador to Pakistan Donald Blome visited Khyber Pakhtunkhwa (KPK) on August 3 and 4 to highlight the US government’s extensive economic and development assistance, which has benefited the residents of Khyber Pakhtunkhwa over the past 75 years of bilateral relations.

During his trip, Ambassador Blome called upon the Chief Minister Mahmood Khan and emphasized that the United States wishes to continue cooperation on economic development, commerce, educational partnerships, and investment that have helped the region and its people. 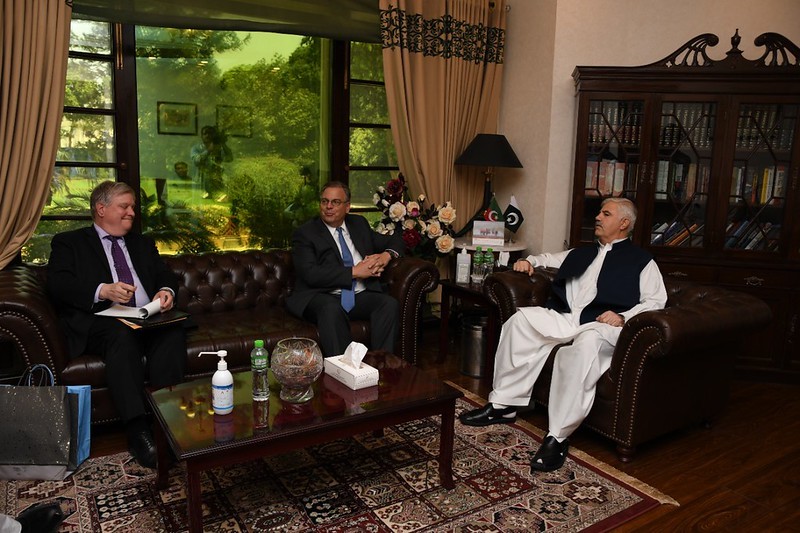 Ambassador Blome visited the Torkham border crossing to see first-hand how the border contributes to trade and economic activities in Khyber Pakhtunkhwa.  This included viewing the 46-kilometer Peshawar-Torkham Road, an $87 million US government construction project which has reduced the cost of travel and vehicle maintenance by half, while facilitating commuters and traders each day.

While in KPK, Ambassador Blome and USAID Mission Director Reed Aeschliman also handed over 36 vehicles to the Department of Health Khyber Pakhtunkhwa as part of US government support for Pakistan to mitigate the COVID-19 pandemic and help rapid response teams collect COVID-19 samples and monitor cases. This donation comes on the heels of a recent announcement in Washington to donate 16 million pediatric COVID-19 vaccination doses to Pakistan, which will bring total US donations to over 77 million.

Ambassador Blome also visited the US government-funded Burns and Plastic Surgery Center in Peshawar. The cutting-edge health facility was constructed and equipped through $15 million in USAID funding. The Center is the largest of its kind in Pakistan and has treated more than 5,000 patients since it opened in 2019.

While touring the state-of-the-art US-Pakistan Center for Advanced Studies in Energy at the University of Engineering and Technology in Peshawar, Ambassador Blome stated: “It is an honor to be here today to see the Center and learn more about the great work that you are doing here. As the United States and Pakistan commemorate our 75-year relationship this year, this facility symbolizes our shared vision and our enormous accomplishments.”

The US government collaborated with engineering universities across Pakistan under USAID’s $127 million partnership to establish centers like this for advanced learning in the areas of water, energy, and food security.

During Ambassador Blome’s visit, the US Embassy’s International Narcotics and Law Director Lori Antolinez participated in an inauguration ceremony for the KPK Prosecution Academy, which was funded by the US government.

In her remarks, Director Antolinez highlighted that the $2 million academy will train 200 prosecutors annually.  Since 1989 the US government, through the State Department’s Bureau of International Narcotics and Law Enforcement, has provided $300 million to KPK to promote economic and agricultural development, strengthen the justice system, and help promote security and stability. This included building 1,240 km of roads in KPK to help farmers and businesses get goods to market, completing 1,300 projects to provide drinking water and irrigation, and building 420 different law enforcement facilities, including local police stations.

Through a donation of $130 million from the American people and in collaboration with the Government of Pakistan, the US government completed the Gomal Zam Dam, which resulted in augmenting Pakistan’s energy capacity by 17 megawatts – enough capacity to power over 20,000 homes. The project at Gomal Zam Dam enabled local farmers in Dera Ismail Khan and Tank districts to successfully cultivate more than 191,000 acres of unproductive land by creating the region’s first reliable supply of water and doubling agricultural production in the area, creating economic opportunities for 30,000 households.

The US constructed over 1,300 kilometers of roads including 652 kilometers of highways, 35 bridges, and two tunnels along the border region, the busiest of which caters to 16,000 vehicles every day. As a result, four major trade corridors between Pakistan and Afghanistan promote bilateral trade and regional economic integration. These roads have reduced the cost of travel and vehicle maintenance for the people of KPK, fueled the construction of new businesses along the roadsides, and improved the delivery of social services for populations moving into the settled areas of the NMDs.

The US government built an additional 1,240 kilometers of roads in the NMDs in crop control and border security projects to help farmers and businesses get goods to market.  To date, the USTh have also completed 1,300 regional water projects to provide drinking water, irrigation, and power to local communities.

The construction and renovation of 420 facilities for the police has helped increase rule of law in the province. The US government has spent $2.6 million renovating 28 regular police stations into model police stations including training on modern policing service-delivery practices and support for women.

With the literacy rate in the newly merged districts at 33 percent overall and at only 12.7 percent among women, the US government improved reading instruction for more than 600,000 children in KPK by training over 14,000 teachers and distributed more than three million books for public use.

Our higher education programming has awarded more than 8,500 university scholarships and competitive grants to deserving yet financially disadvantaged Pakistani students who are pursuing careers in fields such as agriculture and business management that are vital to improving the economy.

The United States constructed 229 and rehabilitated more than 1,000 schools that were damaged due to militancy and natural disasters thus benefiting more than one million students.

2,800 people from KPK participated in the US government-funded exchanges to the United States or educational programs in Pakistan and are now members of the Pakistan-US Alumni Network (PUAN).

The US has invested $1.3 million in public diplomacy grants for KPK over the past six years to build capacity and train journalists, youth, entrepreneurs, and persons with disabilities. This includes an investment of $5.5 million in English language programs in KPK.

Since 2012, a US government grant has set up 21 KPK universities partnerships with US universities on various research projects and collaboration.

Since 2002, the United States have trained over 2,456 participants in investigative and forensic best practices under the Police Program. The US have also trained 820 judges and prosecutors in judicial cooperation and information sharing.

The United States rehabilitated more than 200 facilities, 120 kilometers of the municipal drainage system, and 180 drinking water wells in Peshawar, which resulted in providing access to basic drinking water, sanitation, and solid waste management services to more than 2,000,000 people.

The US is delivering life-saving services for more than 340,000 women and children through multiple interventions in the region and have also trained more than 10,000 healthcare providers.

It provided equipment to 48 health units, donated medical equipment to six teaching hospitals, and supported the completion of a 120-bed Burns and Plastic Surgery Center in Peshawar to help protect the health of KPK’s people.

As a result of the US government partnership with the Pakistani government to launch a $127 million flagship initiative to establish centers for advanced learning in the areas of water, energy, and food security, these centers are now leading institutions across Pakistan and globally. For example, US-Pakistan Center for Advanced Studies in Energy at the University of Engineering and Technology in Peshawar is now the technical lead on conducting feasibility and solarization for public colleges in the NMDs.

The US government supported more than 130,000 women in remote areas to register and receive their national identity cards, which will include them in voters lists and give them benefits from various government support programs.

Since 2008, the US government has supported more than 2.2 million temporarily displaced persons by providing more than $338 million in humanitarian assistance in areas including agriculture, health and hygiene, food and water, security, shelter, and sanitation.

The US government supported 3,000 women farmers by providing poultry packages and greenhouses in KPK, contributing to their economic stability.

It contributed to the improvement of agriculture production of more than 220,000 hectares through improved irrigation networks, expanded horticulture value chains, and increased farmers’ access to markets.

US IT skills company Udacity signed a PKR 135 million ($600,000) contract with the Government of KPK on June 29 to provide nano-degree skills training to graduates.

Launched this year, Coca Cola owns and operates a greenfield bottling plant at Hattar-Haripur area with an investment of $50 million.

The US government has supported six Ambassadors Fund for Cultural Preservation projects in KPK, investing more than $800,000 in cultural heritage preservation since 2002. This includes $600,000 to restore and conserve the Buddhist monastery at Takht-i-Bahi.